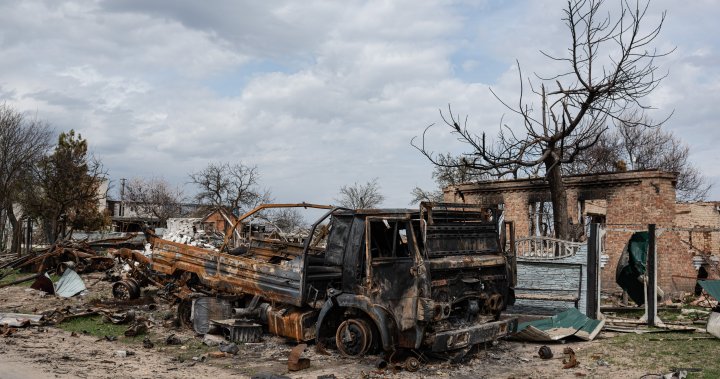 Russia accused NATO of engaging in a proxy battle that created a serious risk of nuclear war as Washington convened its allies on Tuesday at a German air base to pledge the heavy weapons Ukraine needs to achieve victory.

With Russian forces having been forced back from Kyiv and now attempting a new advance in Ukraine’s east, U.S. Defence Secretary Lloyd Austin welcomed officials from more than 40 countries to Ramstein, headquarters of U.S. air power in Europe.

“As we see this morning, nations from around the world stand united in our resolve to support Ukraine in its fight against Russia’s imperial aggression,” Austin said. “Ukraine clearly believes that it can win, and so does everyone here.”

In a marked escalation of Russian rhetoric, Foreign Minister Sergei Lavrov was asked on state TV about the prospect of World War Three and whether the current situation was comparable to the 1962 Cuban Missile Crisis that nearly caused nuclear war.

“The risks now are considerable,” Lavrov said, according to the ministry’s transcript of the interview.

“The danger is serious, real. And we must not underestimate it,” Lavrov said. “NATO, in essence, is engaged in a war with Russia through a proxy and is arming that proxy. War means war.”

U.S. officials have shifted emphasis this week from speaking mainly about helping Kyiv defend itself to talk of a Ukrainian victory that would deliver a blow to Russia’s ability to threaten neighbors in the future.

Austin, who visited Kyiv along with U.S. Secretary of State Antony Blinken on Sunday, said on Monday: “We want to see Russia weakened to the degree that it can’t do the kinds of things that it has done in invading Ukraine.”

Chairman of the U.S. Joint Chiefs of Staff Mark Milley, flying to Tuesday’s meeting, told reporters the next several weeks in Ukraine would be “very, very critical.”

“They need continued support in order to be successful on the battlefield. And that’s really the purpose of this conference.”

The aim would be to coordinate aid that includes heavy weapons such as howitzer artillery, as well as killer drones and ammunition, General Milley said.

Kyiv and its allies played down Lavrov’s remarks about nuclear war.

“I don’t think that right now there is an imminent threat of escalation,” Heappey told BBC Television.

The U.S. State Department on Monday approved the potential sale of $165 million worth of ammunition to Ukraine. The Pentagon said the package could include ammunition for howitzers, tanks and grenade launchers.

Moscow’s ambassador to Washington told the United States to halt shipments, warning that Western weapons were inflaming the conflict.

UN Secretary-General Antonio Guterres was due in Moscow on Tuesday to meet President Vladimir Putin and Lavrov, the highest profile peace mission since the war began, although Western countries have said they have little hope of a breakthrough.

Moscow calls its actions a “special operation” to disarm Ukraine and protect it from fascists. Ukraine and the West call this a false pretext for an unprovoked war of aggression.

No Mariupol humanitarian corridor agreement with Russia yet, Ukraine says

Russia has yet to capture any of Ukraine’s biggest cities. Its huge invasion force was forced to pull back from the outskirts of Kyiv in the face of stiff resistance last month.

But it has since announced new war aims to focus mainly on the east, and sent more troops there for an assault on two provinces where it has backed a separatist revolt.

“It is obvious that every day – and especially today, when the third month of our resistance has begun – that everyone in Ukraine is concerned with peace, about when it will all be over,” President Volodymyr Zelenskyy said late on Monday.

“There is no simple answer to that at this time.”

Ukraine’s general staff said on Tuesday that Russia’s offensive continued in the eastern Kharkiv region with Russian forces trying to advance towards a village called Zavody.

Russia is probably attempting to encircle heavily fortified Ukrainian positions in the country’s east, the British military said in an update on Tuesday.

Reports say the town of Kreminna has fallen, with heavy fighting in the south of the city of Izyum, as Russian forces try to advance towards the cities of Sloviansk and Kramatorsk, Britain’s defence ministry said on Twitter.

Russian forces kept up their bombing and shelling of the vast Azovstal steel plant in Mariupol where fighters are hunkered down in a city reduced to rubble by Russian siege, Ukrainian presidential aide Oleksiy Arestovych said.