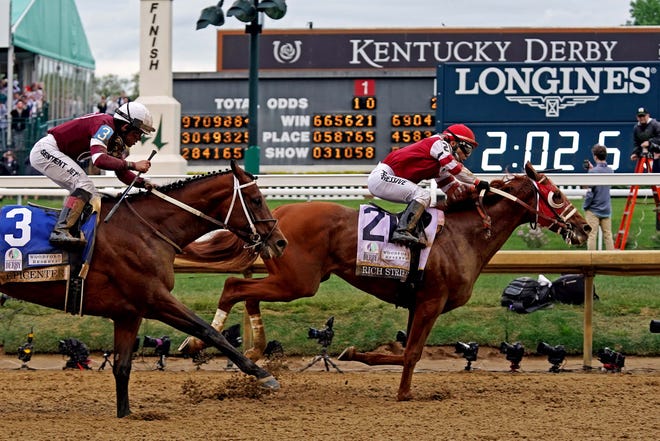 LOUISVILLE, Ky. — After disqualifications and a pandemic and thoroughbred racing’s long discussion about betamethasone, the 2022 Kentucky Derby was billed as a “return to normal.”

There was nothing normal about this.

Rich Strike, who was on the also-eligible list until Friday morning, made a stunning move along the rail to win the Kentucky Derby on a cool and cloudy first Saturday in May at Churchill Downs.

“I don’t know how (to put the win into words),” trainer Eric Reed said. “I fell down in the paddock when he hit the wire. I about passed out. I’m so happy. This is something, you know, is the reason everybody does this, because we’re not supposed to be here, but I knew this horse loved the track, and we’ve been training so good all year.”

Rich Strike finished third in the Grade 3 Jeff Ruby Steaks on April 2 at Turfway Park and stood No. 21 on the final points list for the Derby, which is limited to 20 runners. He was entered Monday as an also eligible and earned a spot in the race Friday morning when trainer D. Wayne Lukas chose to scratch Ethereal Road.

Reed’s words when he got the news seem prophetic now: “Get a good break and work over to the inside. Start picking them up midway on the backstretch and then pass them all before the finish line.”

The race set up for a closer because of a blistering early pace set by Summer Is Tomorrow, who set fractions of 21.78 seconds for the quarter-mile and 45.36 seconds for the half-mile as Crown Pride raced just to his outside.

As the early speed faded, Messier had first run at the lead before Epicenter swept by and seemed poised to give trainer Steve Asmussen his first Derby victory.

Zandon joined the battle in the final furlong before Rich Strike — a la 50-1 shot Mine That Bird in 2009 — charged along the rail for the victory.

A son of Keen Ice out of the Smart Strike mare Gold Strike, Rich Strike was bred at Calumet Farm. After finishing 10th in his first race in August at Ellis Park, he was claimed for $30,000.

He broke his maiden in September at Churchill and then raced five times without ever finishing in the top two. He finished 5¾ lengths behind Tiz the Bomb in the Jeff Ruby Steaks, earning the 20 points he needed to qualify for the Kentucky Derby.

Now the chestnut colt will go down in history after earning the winner’s share of $1.86 million for owner Richard Dawson of RED TR-Racing.

Up next? Likely the Preakness on May 21 at Pimlico for the second leg of the Triple Crown.