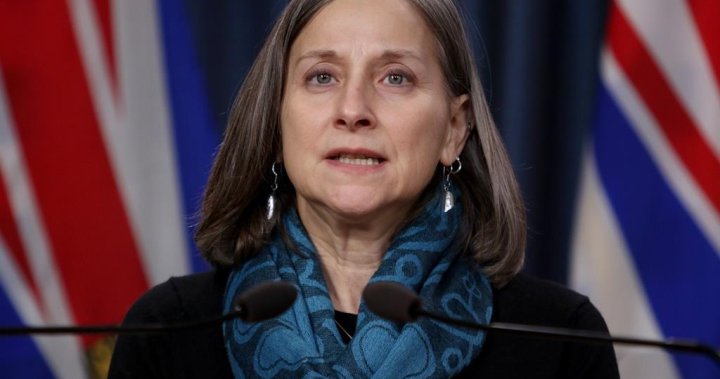 A review of the 2021 heat-related deaths in British Columbia has made 14 recommendations into preventing similar deaths, including a clearer and more coordinated action plan in the event of another extreme heat event.

The report, produced by the BC Coroners Service and obtained by Global News prior to its official release on Tuesday morning, also recommends that authorities review whether to issue cooling devices such as air conditioners and fans to people most at risk of dying during a heat emergency.

On Monday, before the report was released, the province announced the new BC Heat Alert and Response System to more directly inform the public of extreme weather events.

Extreme heat emergencies to be added to B.C. alert system

The province has been under intense pressure in the wake of hundreds of people dying in last June’s heat dome when, according to the report, temperatures rose to a peak of over 40 C in many parts of the province.

In its report, the coroners service says it investigated more than 800 deaths during the week of June 25 to July 1, 2021, and later found 619 to have been heat-related.

Chief coroner Lisa Lapointe is scheduled to hold a news conference at 10 a.m. PT on Tuesday. It will air live here on our website, on the Global BC Facebook page, and on BC1.

“High indoor temperature was the primary cause of injury and death during the extreme heat event,” the report reads.

“During this time, hot air became trapped indoors and continued to rise over time. Although outdoor
temperatures decreased overnight, residences did not cool off, exposing people to harmful high temperatures for extended periods of time.”

Based on information collected during its investigations, the coroners service found that 46 of the 619 people who died, or just seven per cent, had air conditioning in their home, and that fans were used in just 24 per cent of homes.

Most of the deceased were older adults who lived alone and had compromised health due to multiple chronic diseases, the report says, such as schizophrenia, substance use disorder, epilepsy, chronic obstructive pulmonary disease, asthma, mood and anxiety disorders, and diabetes.

Staff at B.C.’s 911 dispatcher flagged understaffing up to a year before deadly heat wave: emails

“Call delays also increased during the extreme heat event. E-Comm 911’s service level target is for 95%
of 911 calls to be answered in five seconds or less,” the report says.

The report also found that paramedics attended 332 deaths, or 54 per cent, in a median response time of 10 minutes and 25 seconds. In 50 cases, paramedics took 30 minutes or longer from the time of the 911 call to get to the scene.

1. BC government will officially release the report to the chief coroner tomorrow. It reviewed heat dome related deaths from 2021. In the report, the Panel identified three key areas to reduce heat-related deaths…..
#bcpoli @cknw @GlobalBC pic.twitter.com/HWmnYq6Spm

Other recommendations include the health ministry, health authorities and First Nations Health Authority developing a public messaging system on caring for vulnerable people during a heat event, and for the environment ministry to ensure rebates are available for both passive and active cooling measures.

“Rebate priorities should be … targeted to low income households and the least energy efficient residential building stock,” the report reads.

2:09
Governments and medical officials trying to learn some of the lessons from June’s record-breaking heat dome

Governments and medical officials trying to learn some of the lessons from June’s record-breaking heat dome – Jul 29, 2021

As part of next steps, the province has also committed to further review the process of informing the public about significant weather events.

“When issuing extreme weather alerts, recognition will need to be paid to the fact that not everyone
accesses social media, has a phone, can read signage or speaks English as their primary language,” the report says.

“Alerts and warnings must be multilingual and delivered via a variety of mediums. It is also essential that people working in any type of care facility or who provide housing, are aware of heat dangers and measures required to alleviate those dangers.”