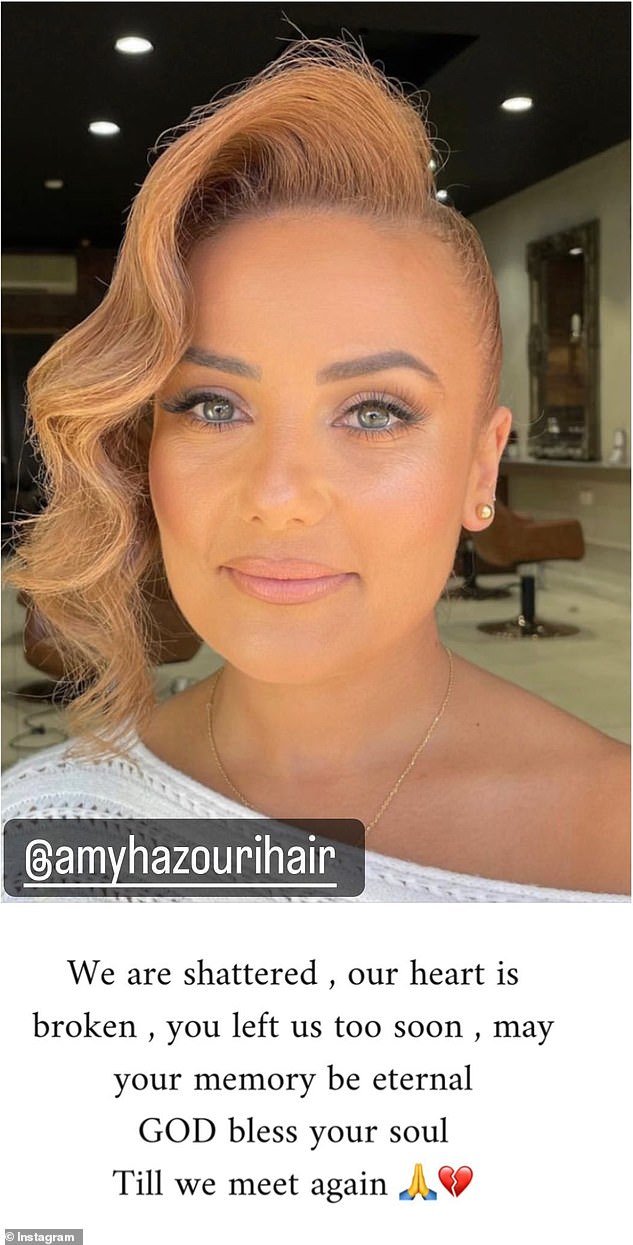 A young hairdresser has been identified as the second victim in the horror gangland shooting which claimed the lives of two mothers.

Two women, aged 48 and 39, were shot dead in a silver Toyota 4WD on Hendy St, Panania in Sydney‘s west on Saturday night with police saying Sydney gangsters ‘throw out the rulebook’ by targeting women.

Home security footage has captured the chilling moment gunshots rang out on a suburban street in the ‘planned’ and ‘targeted’ attack.

On Sunday, NSW Police confirmed the driver of the Toyota managed to flee the shooting scene, driving less than a kilometre away to nearby Weston Street at Revesby before emergency services were called.

The 48-year-old victim, Lameta Fadlallah,was the girlfriend of a notorious underworld figure and died at the scene.

The 39-year-old was hairdresser Amy Hazouri, who was rushed to Liverpool Hospital where she was pronounced dead.

One resident described the terrifying moment he saw three vehicles rush down the street and emergency services leap into action to try and save the women.

A 20-year-old driver managed to drive a kilometre from a shooting after gunmen opened fire on their vehicle and killed two women (pictured, one of the women has been identified as Lameta Fadlallah)

A 48-year-old woman, who has been identified as Lameta Fadlallah, died at the scene while a 36-year-old woman was rushed to Liverpool Hospital before she died

‘The first police car turned up, the two guys got out, everything calmed down,’ he said.

‘Straightaway, everything calmed own. These two policemen went to work on the lady, and they got out of the car, and they worked so hard on her.’

A 16-year-old girl was also in the car and was ‘incredibly shaken’ but not physically injured.

All four people in the car are understood to be casual associates of one another.

Speaking at a press conference on Sunday, NSW Police Detective Superintendent Danny Doherty said the attack appeared to be ‘planned’ with the women targeted because of her ‘past relationships and links’.

‘This is an appalling attack on two women. They have lost their lives. It was a planned murder, an assassination really, and it’s happened in a public street in Sydney,’ he said.

‘It’s unacceptable by any standards. It’s unprecedented really. And we are determined to get the answers for the family.’

Ms Fadlallah was the girlfriend of the notorious stand-over man and drug dealer Helal Safi, who died in January last year aged 45.

The 200kg underworld figure survived being stabbed 42 times in jail and was found dead in his Sydney apartment shortly after his release.

There is speculation Ms Fadlallah may have had information that others wanted to silence.

Colleagues at Ms Hazouri’s salon in Bankstown shared a moving tribute on Sunday saying they were ‘shattered’ to learn of the untimely death.

‘We are shattered, our heart is broken, you left us too soon,’ the tribute read.

‘May your memory be eternal… until we meet again.’

Ms Hazouri was a well respected hair stylist who specialised in bridal looks.

One of the women has been identified as mother Lameta Fadlallah

The burnt-out car was towed away on Sunday afternoon

Police allege the shooting was a targeted attack

Mr Doherty said the attackers had broken an ‘unwritten law’ amongst organised crime to ‘not touch women or family’.

‘They don’t discriminate if you’re male or female. Every rule book has been thrown out, and that is concerning.’

Police said it was too soon to confirm whether this shooting is just the latest in an ongoing gangland war, despite having all the usual hallmarks.

Three burnt out cars were found in surrounding suburbs which are all now undergoing forensic examination.

‘This unprecedented, appalling attack needs to be assessed on its own merits,’ Mr Doherty said.

‘This is an organised, methodical, planned murder. That concerns us. We can’t get away from the fact that that’s unusual and unprecedented.’

Police are appealing to the public for help.

‘We want to find those answers out as much as you do. It’s important for us the timeline that occurred. All we can tell you is, it was an incredibly violent, horrendous crime where two women have been shot dead in a car,’ Mr Doherty said.

‘We should be all completely appalled that two women have lost their lives in an unprecedented attack. Whether it is organised crime links or not, that is part of the investigation were looking it.

‘There’s no suggestion of any links to the current conflict so we are treating this on its own merits and the motive is still unclear. We need that information.’

A car was found burnt out in the nearby suburb of Panania but police are still working to establish whether there is a link between the two incidents.

Revesby is in the heart of an ongoing gangland war in Sydney.

Multiple crime scenes have been established throughout the area with the Homicide Squad and local area command working together to investigate.

Any person with information, dashcam or CCTV is urged to contact Crime Stoppers on 1800 333 000.

Emergency services were called to Weston Street in Revesby about 8.50pm on Saturday night amid reports of a double shooting

HOW THE UNDERWORLD HAS ERUPTED IN SYDNEY

AUGUST 29, 2020 – Fares Abounader, a Comanchero bikie was shot dead in a drive-by attack as his wife and young child were inside their Panania house.

OCTOBER 4, 2020 – Shaylin Zreika – an associate of the Alameddines – is beaten with a metal bar in a street fight in Strathfield

OCTOBER 18, 2020 – Rafat Alameddine’s former home is shot up in a drive-by shooting

FEBRUARY 15, 2021 – Bilal Hamze’s mother Maha Hamze comes under gunfire again in another drive-by shooting at her home in Auburn

MARCH 12, 2021 – A home linked to the Alameddine family in Guildford is shot up

OCTOBER 20, 2021 – Salim and Toufik Hamze are gunned down outside their home in Guildford

JANUARY 6, 2022 – Brother of Bassam Hamzy, Ghassan Amoun, is shot dead at 35 years of age in a brazen daylight execution as he sat in a BMW outside an apartment building in Western Sydney.

APRIL, 4, 2022 – Mahmoud ‘Brownie’ Ahmad aka ‘Mr Big’ is gunned down in a hail of bullets – after being warned by police that he had a million-dollar bounty on his head for his role in deadly shooting in Greenacre.

MAY 10, 2022 – Comanchero bikies with links to the Alameddine clan, Tarek Zahed and his brother Omar were shot at while training at a gym in Auburn. Omar died at the seen while Tarek miraculously survived after being shot 10 times including in the face.

MAY 14: Rami Iskander, 23, was shot in the torso in front of his pregnant wife and two-year-old child at his home on Knox Street at Belmore just before 4am on Saturday. He is the nephew of Brownie Ahmad

MAY 15: NSW Police launch Strikeforce Erebus to try and tackle the growing problem of gang violence with the Australian Federal Police and intelligence agencies partnering with state cops to stop the bloodshed.

JUNE 28: Former Lone Wolf bikie Yusuf Nazlioglu dies in hospital a day after he is hit by 10 bullets in a Rhodes underground carpark