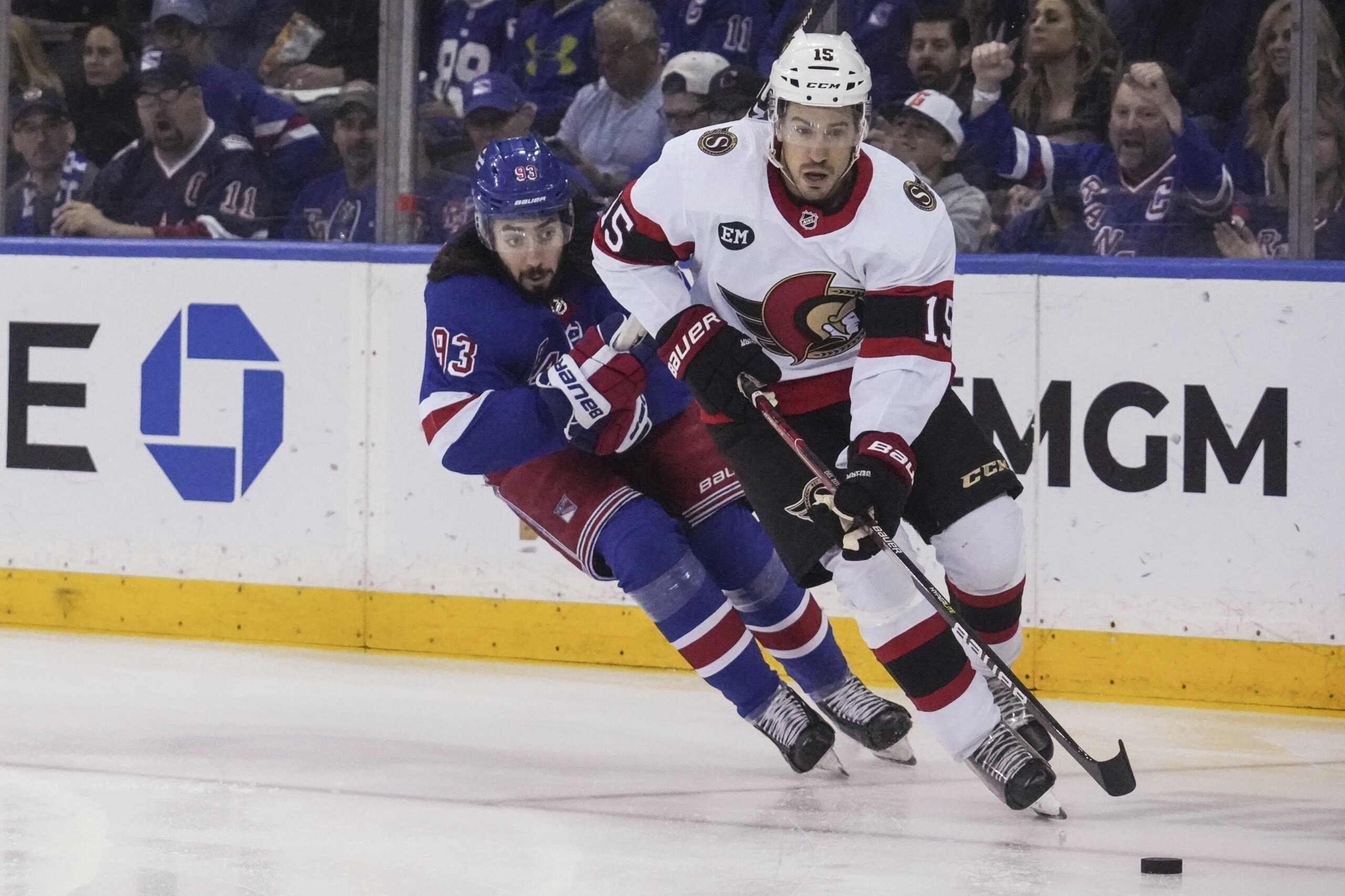 Ryan Strome also had a goal and Igor Shesterkin needed just 19 saves to thwart the Senators as the surging Rangers improved to 7-1-1 in their last nine and moved into a tie with Carolina atop the Metropolitan Division with 100 points. The Rangers have nine games left, while the Hurricanes have 10. The teams meet Tuesday night in New York.

Shesterkin improved to 34-10-4, becoming the fourth goalie in franchise history with 34 victories in a season, joining Henrik Lundqvist, Ed Giacomin and Mike Richter.

The Rangers continued their stellar play at home, improving to 24-7-4 including an 11-3-2 mark in their last 16 contests at Madison Square Garden where an appreciative and raucous crowd gave their team a sustained ovation at the end of the game with the playoffs assured.

After Ottawa’s Austin Watson scored his seventh goal at 2:22 of the first, Panarin tied at 12:32 with his 21st goal to send the teams into the first intermission tied at 1.

The Rangers outshot Ottawa 13-3 in the first and continued that domination in the second, outshooting the Senators 12-6.

Andrew Copp notched his 17th goal at 6:56, beating Anton Forsberg from the right circle with a high wrist shot. Copp has 11 points in 10 games since joining the Rangers in a trade from Winnipeg on March 21.

Kreider then rifled the puck post Forsberg at 9:05 to give the Rangers a two-goal cushion. Mika Zibanejad and Ryan Lindgren assisted.

Strome made it 4-1 for the Rangers at 17:27 of the second, scoring his 17th with assists to Panarin and Lindgren before Kreider scored again at 17:41 of the third for this 49th goal of the season.

Kreider, who has nine goals in his last 11 games, is now one goal shy of becoming the fourth Rangers player in franchise history to reach the 50-goal mark.

Forsberg made 28 stops in defeat. Ottawa lost for the second time in a row after winning three straight.

Panarin, who also assisted on Copp’s goal along with K’Andre Miller, has points in four straight contests and 26 points — six goals and 20 assists — in his last 16 games.

Panarin, who played in his 500th career game in Thursday’s 3-0 home win over Pittsburgh, leads the Rangers with 67 assists and 88 points overall. The only active players with more points than the 30-year-old Panarin through 500 games are Sidney Crosby, Connor McDavid, Alex Ovechkin and Evgeni Malkin.

The Rangers have scored three or more goals in nine of their last 10 games, combining for 35 goals in those games.

Ottawa lost for the second time in a row after winning three straight. The Senators, mired in seventh place in the Atlantic Division, haven’t made the playoffs since 2017 when they reached the Eastern Conference finals by defeating the Rangers in six games in the second round. Ottawa then lost to Pittsburgh in seven games.

Senators: Return home to host the Winnipeg Jets on Sunday.