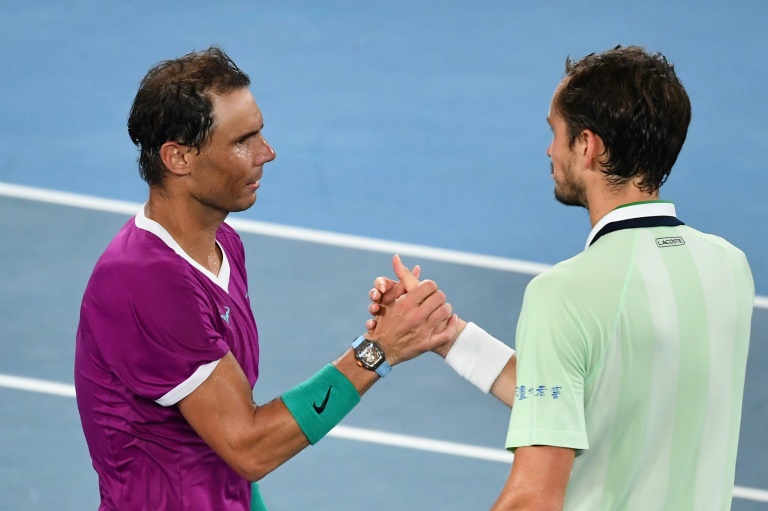 Just over a month ago, Rafael Nadal was contemplating retirement before making the decision to play a warm-up event in Abu Dhabi ahead of the 2022 Australian Open. On Sunday, he found himself holding the trophy at the Rod Laver Arena after a hard-fought victory over Daniil Medvedev, 2-6.6-7,6-4,6-4,7-5.

This is only Nadal’s second Australian Open trophy in six finals appearances, and it took him 13 years to repeat the feat. More importantly though, he is now the sole holder of the record for most number of men’s singles Grand Slam titles won. With 21 major titles, he puts himself above both Roger Federer and Novak Djokovic, who are still tied with 20 titles each.

Nadal himself was in disbelief as he accepted the winner’s trophy and the Russian also spoke about how amazed he was that his 35-year-old opponent was able to keep fighting for five and a half hours. Indeed, it did not look like Nadal was up to the task. In the opening set, he was already drenched in sweat while the score was just level at 1-1.

The Spaniard trudged along the court like a slug, leaving a trail of sweat along the blue surface of the court. Medvedev took an easy 2-6 victory in the first set, but Nadal did much better in the second, pushing it to a tie break. However, the Russian was relentless. He did not give away a single point easily, giving Nadal a dose of his own medicine. Medvedev ran to every corner of the court and managed to return Nadal’s shots even as the Spaniard tried to be creative. It was reminiscent of Nadal’s earlier years, when he ran after every single ball no matter how hard an opponent tries to outsmart him.

Medvedev managed to close out the second set through a tie break, but Nadal was looking visibly more energised as the Melbourne sun started to set. As the temperature dropped and evening fell, Nadal looked more comfortable on court. Medvedev started to show some hints of weakness as he asked for treatment on his thigh.

Things started to turn around and the Spaniard was able to take the third set, but his first serve was simply absent on the day. The Russian was able to secure easier points throughout the evening, with Nadal struggling to get his first serve to work. Every single game was a struggle, with aces coming few and far between for the eventual champion.

In the fifth set, Nadal took the early break but Medvedev did not give up easily. He managed to break back to force Nadal to wait longer before he could finally lift the trophy. The crowd was completely energised, and it was clear that the Spaniard was the favourite. In the end, it was an emotional victory for Nadal, who admitted that a lot of emotions were running through him all evening. More importantly, he announced that he was feeling healthy, and will do his best to be back in Melbourne next year.