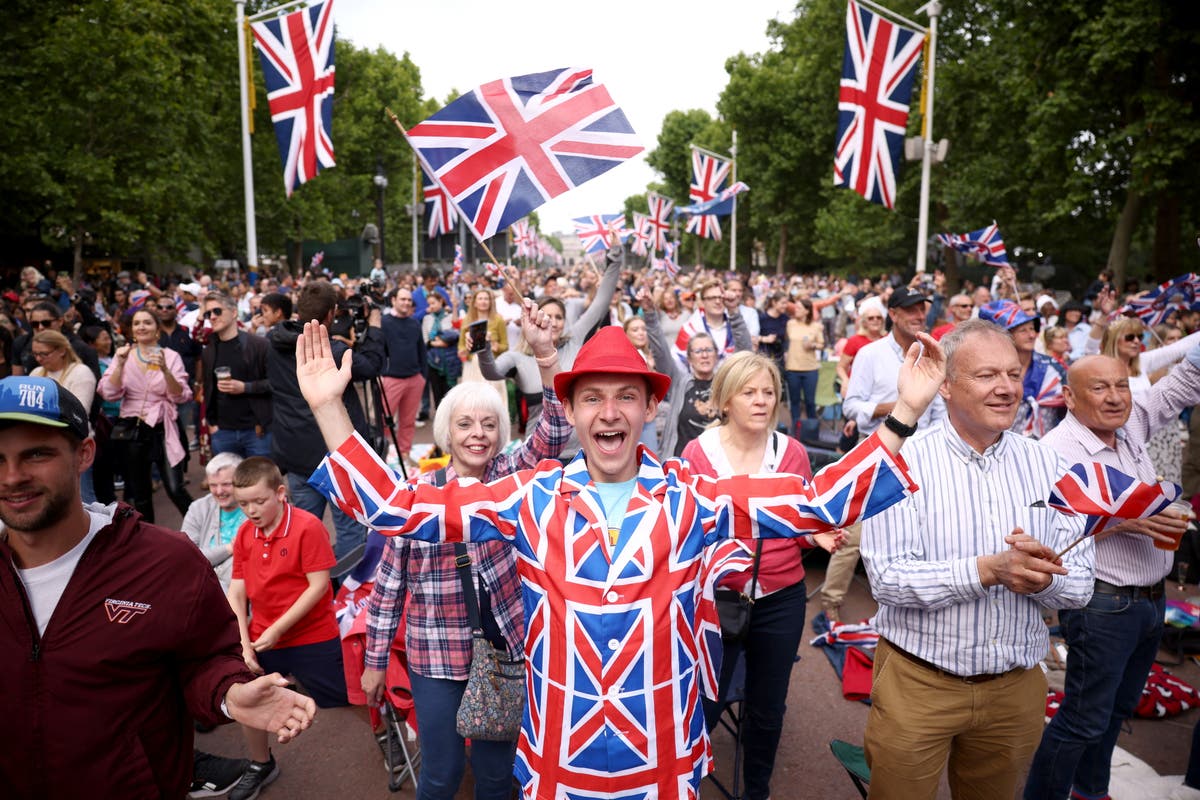 oyals fans from across the world have begun to arrive at Buckingham Palace ahead of the concert on Saturday night.

Some have queued since the early hours of Saturday morning in order to catch a glimpse of the blockbuster show, which will include names such as Duran Duran, George Ezra, Nile Rodgers, Queen + Adam Lambert and a recorded performance from Elton John.

Princes Charles and William will also attend the Platinum Party at the Palace on Saturday evening to end the third day of the Jubilee weekend.

Celebrities such as, Stephen Fry and Sir David Attenborough will also attend the event which will mark the end of the third day of the Jubilee weekend.

Earlier in the day William and Kate, the Duchess of Cambridge met the performers and crew involved in the Platinum Jubilee Celebration Concert taking place on the grounds of Cardiff Castle.

The Earl and Countess of Wessex also travelled to Northern Ireland where they attended a 1950s-themed celebration, before then heading to Bangor which has received city status.

Due to mobility issues, the 96-year-old monarch was forced to miss the Epsom Derby on Saturday and also missed the St Paul’s Thanksgiving Service on Friday, after suffering “some disomfort” after Thursday’s events.

In her place, Princess Anne attended the Epsom Derby and was seen grinning with delight as she took in the prestigious occasion.

Brian May hopes performance will be ‘epic’

Brian May has said that he hopes the collaboration of Queen + Adam Lambert can “pull off something epic” when opening the BBC’s Platinum Party At The Palace concert this evening.

The 74-year-old guitarist created a classic moment 20 years ago during the 2002 Golden Jubilee celebrations when he performed God Save The Queen on Buckingham Palace’s roof.

Speaking backstage, May told the PA news agency: “We’re exceedingly honoured and exceedingly happy to be here, it means a lot to us.

“We were here 20 years ago for the Golden Jubilee and it’s great to be asked back.

“And we like to bring something special every time, so we’ll see if we can pull off something epic tonight.”

He added that he does feel a “little bit of pressure” this time around, but noted that the band enjoys the challenge of creating events which will be memorable.

George Ezra has hailed the Queen’s 70-year reign as sovereign as “admirable” and “mind-blowing” ahead of his performance at the BBC’s Platinum Party at the Palace concert.

The singer, 28, said he feels “very flattered” to be among the line-up, noting that this event will rank in his career highlights alongside playing the main stage at Glastonbury.

Reflecting on the Queen’s reign backstage at the event, Ezra told the PA news agency: “I was watching the other day a clip that kind of showed every prime minister that she has worked with, and this is my ignorance, but I just hadn’t realised how far back it was.

“And then when we think about the fact that this is the 70th Jubilee, that’s unbelievable because of course in my life, she will have always been the monarch.

Aisha Kasim, 37, described celebrating the Queen’s Platinum Jubilee at the Palace as a “once-in-a-lifetime opportunity”.

Ms Kasim, who works in learning support at a university, travelled to the Buckingham Palace concert with her mother Mae Kasim, a retired teacher, from their home in Aberdeen.

Aisha, who was wearing a Scottish flag, said: “I think it’s a once-in-a-lifetime opportunity and I think it’s the sort of thing that we probably won’t see again any time soon.

“(The Queen) is our longest serving monarch, she’s done amazing all these years, so it’s just great to come along for the party and to make the journey from Scotland.

“We flew all the way from the other side of the country for this so we’re happy to be here.”

“I’m actually from Nigeria as well, I’m Nigerian-Scottish, and Nigeria was an ex-British colony so I’ve grown up my whole life with that,” she added.

More pictures ahead of the concert

Speaing to Sky News, George Ezra said it would be “surreal” to play at the concert.

“If I weren’t playing today, what would I be doing? I would be back home with the people I love raising a glass,” he added.

Animal rights campaign group Animal Rebellion claimed six of its members ran on to the track ahead of the Epsom Derby.

On Thursday, members of the same group were arrested after they entered the ceremonial route on The Mall before Trooping the Colour.

The group said the protest was aimed at making “a definitive statement, and act, against the cruelty and harm the horseracing industry represents”.

It describes itself as a “mass movement using nonviolent civil disobedience to call for a just, sustainable plant-based food system”.

Eurovision star Sam Ryder has said the manner in which the Queen carries herself “reminds us that strength can be gentle” ahead of performing at the Platinum Party at the Palace.

Ryder, who came runner-up in the recent Eurovision song contest while representing the UK, is among the star-studded line-up who will entertain a live crowd of 22,000 people and a television audience of millions this evening.

Speaking backstage about the monarch’s 70 years on the throne, Ryder said he feels it is “so selfless to give your entire life to that service”.

He added: “How many of us could say that we could do that. It’s breathtaking. The way that she carries herself, it reminds us that strength can be gentle.

“I think that’s so important, to me all the time. To carry yourself in a way where you’re bringing so many people together in unity and solidarity but doing it with such a subtly kindness.”

The singer revealed that he got the call to do the Jubilee concert while on the bus home from Eurovision last month, which left him feeling like he was “overflowing with joy”.

The Duchess of Cambridge visited a children’s hospital in central London on Friday night to meet those who were not able to celebrate the Jubilee.

The Evelina Children’s Hospital wrote on Twitter: “We received a very special surprise last night! Our Patron, HRH The Duchess of Cambridge, dropped in for a private visit to meet our patients, families and staff unable to join in the celebrations this weekend.”

A masked Kate was pictured next to the bed of a young child, who had tubes attached to their face.

Kate became a patron of the Evelina London in 2018.

It is part of Guy’s and St Thomas’ NHS Foundation Trust and treats children with complex and rare conditions from birth into adulthood.

Crowd arriving before the start of the Platinum Party