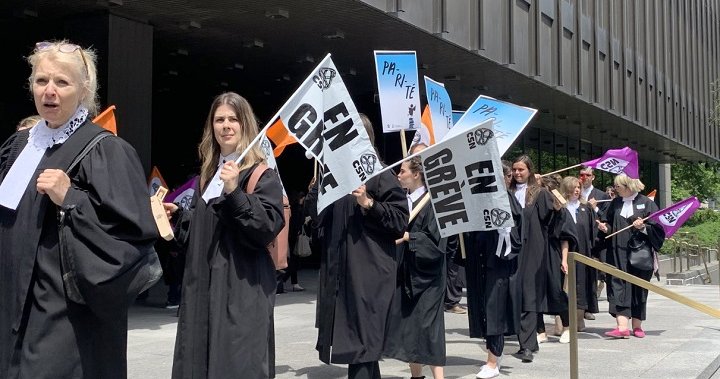 Quebec’s legal aid lawyers are striking this week in protest of the government’s salary offer, which they say will lead to an exodus of attorneys who represent the most marginalized.

About 200 legal aid lawyers walked off the job on Monday for a two-day strike, while a separate group of about 210 lawyers are set to strike Wednesday and Thursday. Protests are scheduled across Quebec, including in front of the offices of government ministers and at the provincial legislature.

Legal aid lawyers, who often represent marginalized communities and low-income people, are demanding that Quebec continue the 30-year tradition of paying them the same as Crown attorneys. Quebec is offering legal aid lawyers a two per cent salary increase per year over three years, but it gave Crown prosecutors a 2.5 per cent increase per year over four years starting in 2020.

Daniel Lessard, president of an association representing legal aid lawyers who will strike Wednesday and Thursday, says his members have to fight the government every time their collective agreement expires.

“Crown attorneys get their salary increase and new conditions,” said the president of the Fédération des avocates et avocats de l’aide juridique, on Monday. “And us, we always have to justify the reason why our work is as difficult and important as the work of Crown attorneys.”

Legal aid lawyer Fabrice Poirier says he recognizes that the 0.5 per cent difference between what was offered to his group and to prosecutors isn’t much, but he questioned why the government won’t make up the gap.

“We represent vulnerable populations such as people experiencing homelessness, people with mental health issues,” Poirier said in an interview on Monday. “We have a role, we mostly want to be seen and recognized. That’s the goal.”

He said at least 11 people had their cases delayed on Monday because of the strike, adding that about 41 people will be affected Tuesday.

“We don’t want our clients to be impacted; this is about recognition,” Poirier said, adding that the effect of the strike could be substantial because legal aid lawyers are required in most courtrooms across the province.

Treasury Board spokesperson Florence Plourde said Monday the work conditions of legal aid lawyers are different than the conditions of Crown attorneys because the two groups are not part of the same collective bargaining system. Legal aid lawyers, she said, are employees of an agency responsible for applying Quebec’s legal aid legislation.

“Legal aid workers are not the government’s employees,” Plourde said Monday in an email.

Lessard said the legal aid system is facing labour shortages, as several young lawyers switch over to the Crown because of better pay.

“We want a strong and qualified legal aid system,” he said. “We want to retain high-quality lawyers in the system and one of the ways to achieve this is with parity.”

— With files from The Canadian Press’ Lia Lévesque