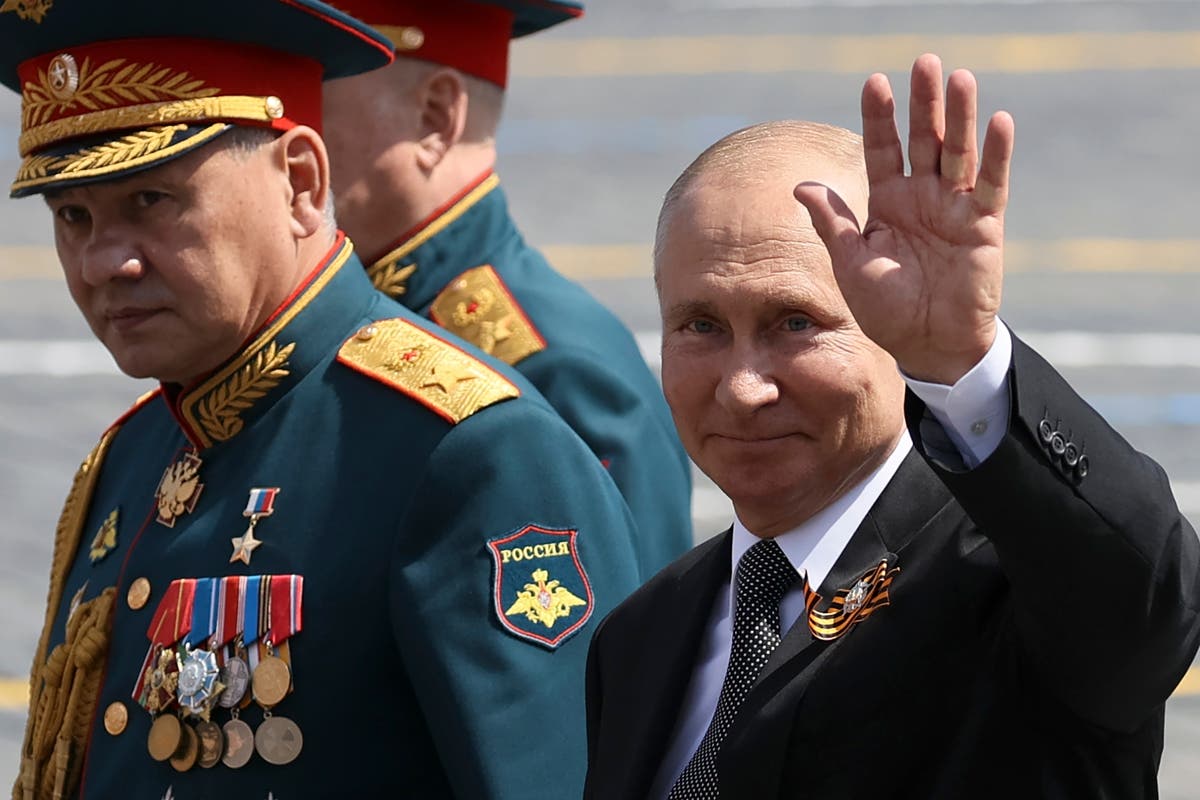 ladimir Putin’s regime is “mirroring” the actions of the Nazis, Defence Secretary Ben Wallace will say as the Russian leader stages a military parade to celebrate victory over Hitler’s fascists.

Mr Wallace will use a major speech to say that Mr Putin and his inner circle should share the same fate as the Nazis, who ended up defeated and facing the Nuremberg trials for their atrocities.

In Moscow, Mr Putin will watch the Victory Day parade of military hardware, marking the defeat of the Nazis in 1945.

But according to extracts briefed to the Telegraph and Times, Mr Wallace will say: “Through their invasion of Ukraine, Putin, his inner circle and generals are now mirroring the fascism and tyranny of 70 years ago, repeating the errors of last century’s totalitarian regimes.”

He will add: “Their fate must also, surely, eventually be the same.”

Russia’s sacrifices in the past should not be forgotten, “but nor must the lessons about what lies in store for the perpetrators of such unprovoked brutality”.

Their unprovoked and illegal invasion of Ukraine, attacks against innocent citizens and their homes, and the widespread atrocities – including deliberately against women and children – corrupts the memory of past sacrifices and Russia’s once-proud global reputation

In a message to Mr Putin, he will say: “In going to such extremes to justify this war of choice he and his generals are now ripping up both Russia’s past and its future.

“Their unprovoked and illegal invasion of Ukraine, attacks against innocent citizens and their homes, and the widespread atrocities – including deliberately against women and children – corrupts the memory of past sacrifices and Russia’s once-proud global reputation.”

The Defence Secretary’s speech, at the National Army Museum in London, will also directly criticise the behaviour of Russian commanders for war crimes and their incompetence in a campaign which has failed to secure the gains expected by Mr Putin.

The generals in their “manicured parade uniforms” are “utterly complicit in Putin’s hijacking of their forebears’ proud history” of resisting fascism.

“All professional soldiers should be appalled at the behaviour of the Russian army,” Mr Wallace will say.

“Not only are they engaged in an illegal invasion and war crimes, but their top brass have failed their own rank and file to the extent they should be court-martialled.”

He will say that rank and file soldiers in the Russian army “will not get a voice and their mothers and sisters will be shamed into silence”.

Mr Wallace’s speech comes after Foreign Secretary Liz Truss accused Russia of war crimes over the bombing of a school in eastern Ukraine where civilians were sheltering.

Up to 60 are feared dead after the school in Bilohorivka in the Luhansk region of eastern Ukraine was bombed and caught fire on Saturday.

The Foreign Secretary said she was “horrified” and added that Mr Putin’s regime would be held to account.

Around 90 people were thought to have been sheltering at the school, but just 30 have been rescued.

Ms Truss tweeted: “Horrified by Russia’s latest attack on a school in Luhansk, resulting in the deaths of innocent people sheltering from Russian bombardment.”

She said the deliberate targeting of civilians and infrastructure “amounts to war crimes” and “we will ensure Putin’s regime is held accountable”.

Mr Johnson told his counterparts “the world must go further and faster to support Ukraine” against the Kremlin’s invading forces.

A Downing Street spokeswoman said: “The Prime Minister said there was a savage irony that the leaders had gathered to discuss Putin’s barbaric invasion on a day when they should be remembering the sacrifice of Russian soldiers defeating fascism in the Second World War.

“He agreed with G7 leaders that the world must intensify economic pressure on Putin in any way possible, and said the West must not allow the war to turn into a stalemate that only magnified suffering.

“Ukraine needed to receive military equipment that allowed them to not just hold ground in Ukraine, but recapture it, the Prime Minister told the leaders.”

The G7 agreed more needed to be done to support Ukraine’s agricultural exports, with the war impacting food supplies around the world.

Mr Johnson also urged G7 countries to intensify diplomatic lobbying of countries which were failing to apply pressure on Moscow, “especially as it was clear grossly unjustifiable human rights abuses and war crimes were being committed”, the spokeswoman added.

US officials claimed two major Russian tank factories had ground to a halt because of the impact of economic sanctions.

The UK has pledged an extra £1.3 billion in military support to Ukraine, in a dramatic escalation of assistance for Mr Zelensky’s forces as they fight the Russian invasion.

It is the highest rate of UK military spending on a conflict since the height of the campaigns in Iraq and Afghanistan.