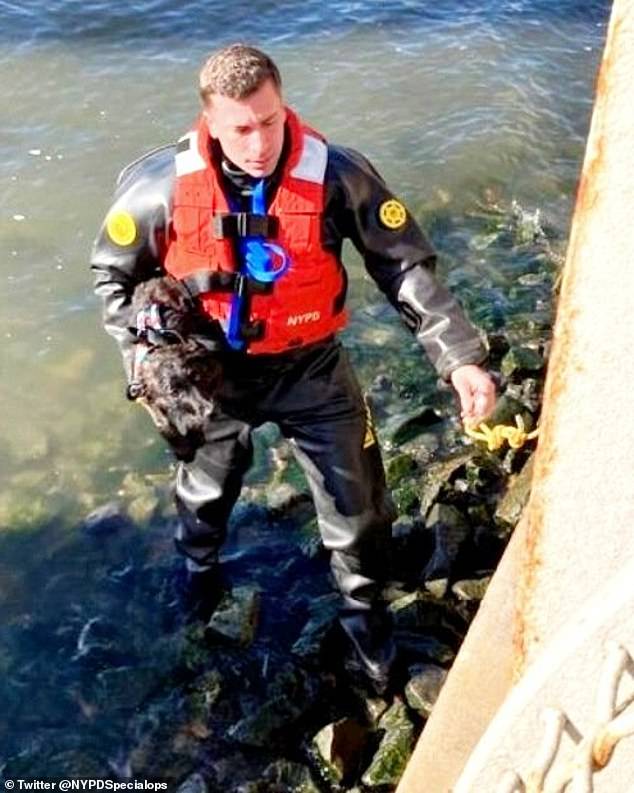 That deserves a-paws! Puppy rescued by NYPD after getting loose at South Street Seaport and diving into the East River Saturday morning

By James Gordon For Dailymail.com

A four-month-old puppy was rescued from the East River after breaking free from her leash on Saturday morning.

The black rescue pup, known as Bebe, was being walked by Can Liu, a worker at the Animal Haven shelter in Lower Manhattan, when he was suddenly startled by a Rottweiler who was not on a leash.

The other dog tried to bite Bebe’s face, who then managed to get away from her walker.

‘He latched onto my dog’s face. I was trying to separate them,’ Liu said to the New York Post. ‘The little guy must have gotten spooked by the big dog, then he was wandering around before managing to jump into the frigid East River.

The pup, called Bebe, broke free from his leash at South Street Seaport and ran into the water off Pier 17

‘He’s scared of people. I guess he found like a crevice by the pier and just jumped in.’

The puppy was carried along by the current under Pier 17.

‘That’s when everybody started freaking out. This is like a little four-month-old puppy in freezing cold water.’

Bebe was rescued from the streets of Antigua and brought to New York City so he could be adopted.

Officers from the NYPD Emergency Service Unit were quickly on the scene and jumped into the water, managing to bring Bebe to shore.

Rescuers put on wetsuits and swam out to rescue the puppy bringing her safely back to land to  Can Liu, a worker at the Animal Haven shelter, pictured center, who was walking her at the time

On Saturday afternoon, the dog was back at her shelter and appeared unharmed.

Later in the day, the dog was rescued once again – this time finding her forever home.

Later on Saturday afternoon, having been warmed up, the dog was rescued by someone who wanted to adopt him