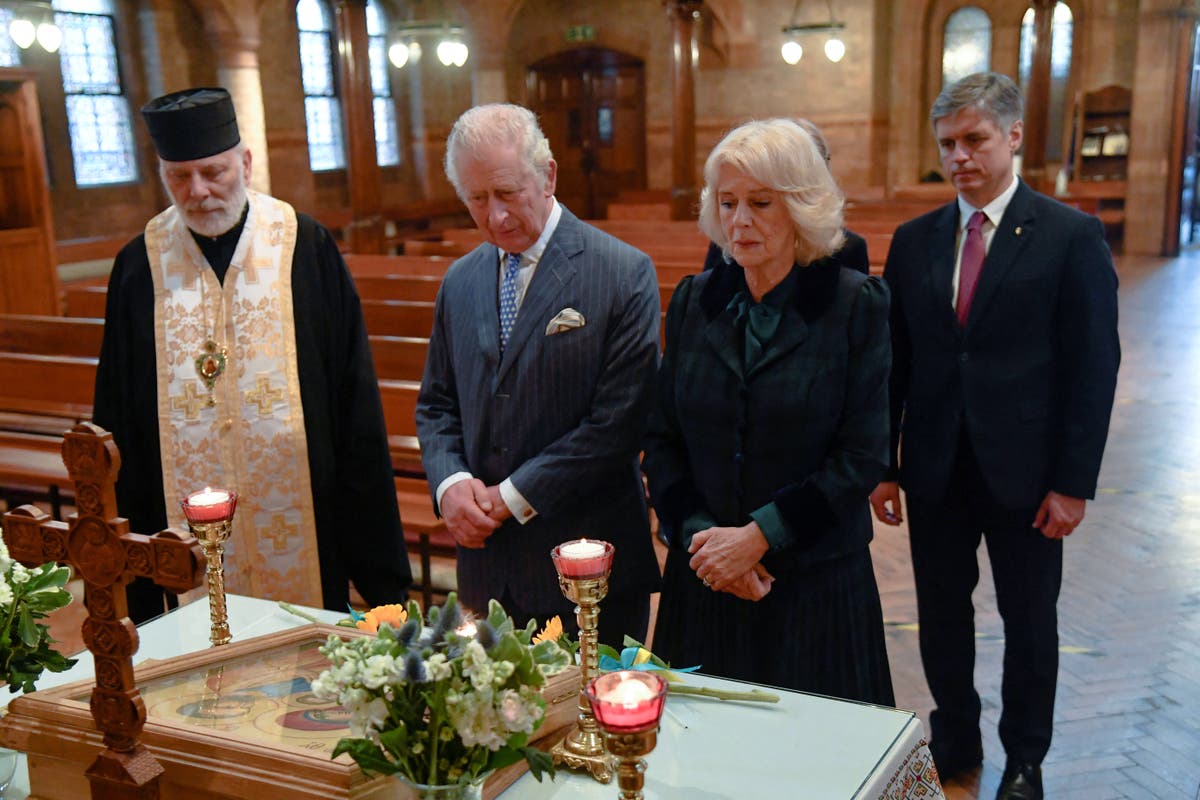 he Prince of Wales has paid tribute to the ‘extraordinary bravery and fortitude’ of the Ukrainian people in the face of ‘such truly terrible aggression’.

On a visit to the Ukrainian Catholic Cathedral in central London the future king accepted home-made cards from children – including one which read ‘Stop Putin’ – and told distraught members of its congregation that he could not believe what he was seeing ‘in this day and age’.

Accompanied by his wife, the Duchess of Cornwall, and representatives from five charities of which he is patron, who he has brought together to help co-ordinate the relief efforts of UK-based Ukrainians, he spent more than an hour comforting those in need.

Camilla frequently wept as she spoke to representatives from the ex-pat community, who are desperately worried about family and friends back home, and hugged the sobbing wife of the Ukrainian ambassador telling her: ‘We are praying for you. ‘

Charles told reporters: ‘What does one say?’

The prince asked to visit the cathedral when discussing the crisis with his advisors with the weekend.

A source said: ‘He has been deeply moved and just wanted to do something to help. He wanted to listen to people to find out what they need and how he can help facilitate that.’

He and the duchess were met at the Cathedral of the Holy Family by Bishop Kenneth Nowakowski and Ambassador Vadym Prystaiko and his wife, Inna.

A member of the congregation greeted them saying: ‘Vee tie mo’ – welcome – and offered them bread and salt, often given to dignitaries.

Bread is a symbol of what gives us life and salt what sustains life.

In a back room representatives of the Ukrainian community in the UK had gathered and Sunday school children sang a beautiful traditional song about their passion for the country and what it means to fight for Ukraine. Camilla could not hide her tears.

Afterwards they moved around the room separately talking to as many people as possible.

Sunday school teacher Lesya Klovak spoke to the prince at length and said he openly expressed his horror at the Russian invasion.

She said: ‘He asked about the song and what it means. He described the war and horrible and said he couldn’t believe that it was happening in this period, in this day and age. He also asked about my family and I told him that my father is 72 years old and delivers food for people. He and my mother say they refuse to run away. He says he will deliver as long as he can. My mother runs a restaurant and she has given it to families who have lost their homes. ‘

She added: ‘He [the prince] said no-one can understand what is going on, he was expressing his sympathy. He said he couldn’t believe it. He said he is with us, supporting us and we are together.  ‘

For the second day Charles had spoken out about the conflict in Ukraine, during a ceremony that granted city status to Southend-on-Sea on Tuesday he told guests the values of democracy were under attack in Ukraine in the “most unconscionable way”.

It is understood the heir to the throne had approached the Ukrainian community offering his help and he brought representatives from five humanitarian organisations he is connected with to offer practical support.

The couple were also joined by the Ukrainian ambassador Vadym Prystaiko, and his wife Inna Prystaiko, who earlier received a rare tribute from MPs, a standing ovation in the House of Commons when he watched Prime Minister’s Questions from the gallery.

Mrs Prystaiko was in tears as the duchess held back her own at the start of the event and when the royal couple left Camilla hugged the diplomat’s wife and said they would pray for her.

Charles’ royal event followed a visit by the Prime Minister to the cathedral on Sunday and emphasised the UK’s position of public support for Ukraine.