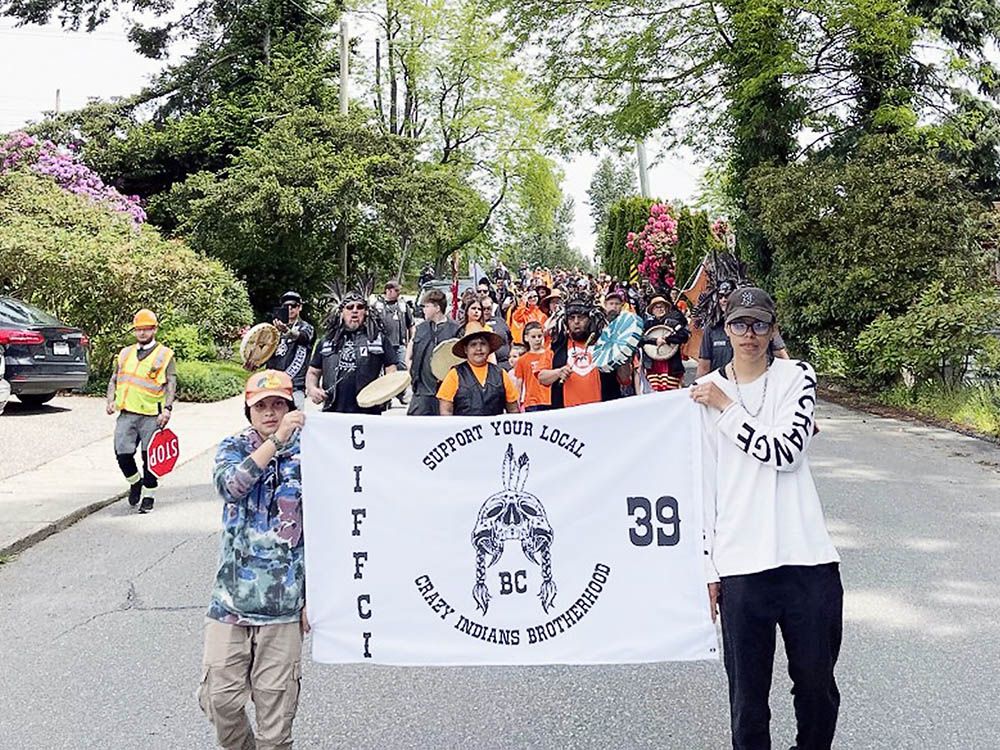 Police are preaching patience after a sometimes heated meeting with First Nations leaders behind a memorial march past a former Mission residential school, which was disrupted by a pickup truck driver who struck and injured several participants.

Investigators looking into the incident were invited to meet with the Cheam First Nation and organizers of the march, and they accepted on Wednesday.

A group was walking on Lougheed Highway in the March for Recognition for Residential Schools last Saturday when they were allegedly hit by a pickup truck. Two people received non-life-threatening injuries. After media coverage, a 77-year-old driver came forward on Monday, and Mission RCMP say he is co-operating with the investigation.

Garett Dan, captain of the B.C. chapter of the Crazy Indians Brotherhood that organized the march, said the meeting at the band office went on for about four hours and got “out of hand” at one point as everyone sat in a circle.

He said anger was expressed at the fact the senior involved in the incident is not in custody, claiming Indigenous people would have been treated differently.

Police have described him as an “impatient driver,” but Dan claims he was goading marchers even before the walk began and said the driver of a pickup was telling them to “get over” residential schools.

“Our people went through a lot of trauma and abuse in residential school and it’s not like they can just blank that out,” said Dan. “It’s exactly like telling a vet to get over the war.”

“The incident was deeply concerning for everyone involved, and members of the public raised concerns about whether the incident was racially targeted, and why the driver was not in custody,” said RCMP spokesman Const. Harrison Mohr in an update on Thursday.

They “spent the morning meeting with the Cheam First Nation, as well as members of the organizing committee (of the march) and some of the victims of this incident,” said Insp. Ted Lewko, the officer in charge of the Mission detachment.

Lewko said it was an opportunity to “listen to their concerns, as well as to be able to explain the importance of a proper fulsome investigation, and not rushing through it.

“We want to ensure we put our best foot forward when conducting investigations. The Mission detachment is working diligently through the investigation and its officers will continue to work towards building positive relationships with Indigenous communities.”

RCMP say the serious crime unit has taken over the “complex investigation,” and is interviewing more witnesses on top of about 20 who have already talked to police. The unit is also asking that anyone who posted video from the scene to social media provide that footage and talk to investigators.

Witnesses and those with video or dash-cam footage are asked to contact Mission RCMP at 604-826-7161. Specifically, investigators hope to speak to the driver of a single-unit dump truck or semi-truck that was behind the blue Chevrolet Silverado pickup when it drove away from the march.

In the meantime, police are asking for patience.

“The Mission RCMP empathizes with those who have been affected by this incident, and understand that closure cannot come soon enough,” said Mohr in the release. “At the same time, it is also vitally important that the investigation be conducted at the highest standard, to ensure that the evidence gathered is upheld in court, and no witnesses or evidence is missed.”

The investigators say they’re committed to bringing recommendations about charges forward “in a thorough and timely manner, to help bring answers and healing to those involved in this incident and the wider community, and to move forward together.”

At least 21 children who attended the former St. Mary’s Residential School in Mission died, according to the National Centre for Truth and Reconciliation. The school closed in 1984, and a former employee was convicted of 12 counts of indecent assault in relation to his time at the school two decades later.

— With a file from The Canadian Press