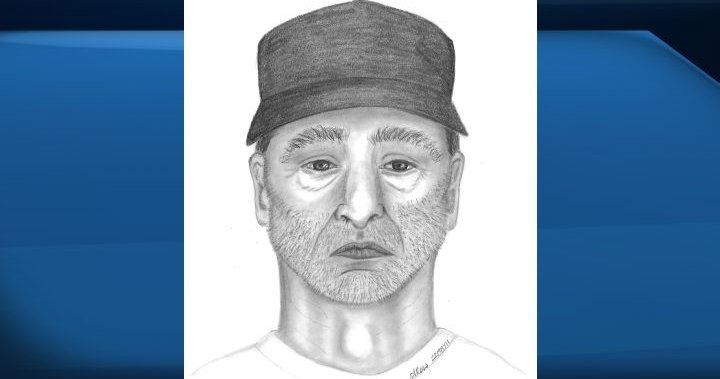 One month after a sexual assault near a south Edmonton school was reported to police, they have released a composite sketch of the suspect.

On May 8, police were told about a woman being sexually assaulted in the area of 42 Street and 12 Avenue. According to police, the attack occurred at 4:15 p.m. when a man “standing inside the tree line north of the Crawford Plains School park” asked the victim, a woman in her 30s, to come to him.

When she approached him, police said she was sexually assaulted before freeing herself and getting away.

In a news release issued Tuesday, police said the suspect is believed to be about 55 years old. He is about five-foot-seven and 150 pounds and has a “defined jaw,” large nose, small eyes, thick eyebrows, and grey stubble. He is also missing “multiple front upper and lower teeth.”

At the time the woman was attacked, the suspect was wearing a white Molson Canadian shirt, dark pants and a dark baseball cap. Police noted that the suspect reportedly spoke with a deep and raspy voice.