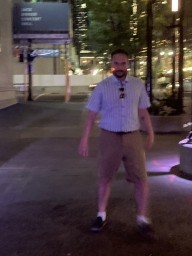 Calgary police are turning to the public for help in identifying a man who is believed to have attempted to lure a young girl.

According to police, she was out with her mother and sister on Thursday night in the southeast.

At around 10:35 p.m., a mother and her two daughters were at Chocoland Café at 237 8 Avenue S.E. when a man entered the establishment and sat at a nearby table close to the family.

The man waited until the mother briefly stepped away from the table and then allegedly grabbed one of the girls by her arm and asked her to let him come closer. The girl and her mother yelled at the man and he fled the area on foot.

The man is described as approximately 5’8’’ to 6’ tall and was wearing a white button-up T-shirt with blue vertical stripes, dark khaki-coloured shorts, a brown belt, white socks and dark-coloured loafers. He has dark hair with a full beard.

Anyone with information about the identity or location of the man is asked to contact the police non-emergency number at 403-266-1234. Tips can also be submitted anonymously to Crime Stoppers at 1-800-222-8477.