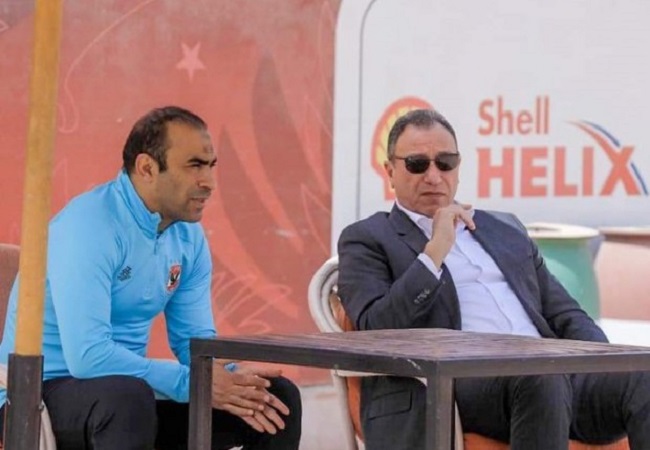 Al Ahly President Mahmoud El Khatib attended the club’s training session this week. This puts pressure on coach Pitso Mosimane for whom the Sunday’s match is a must-win if he want the Egyptian giants to maket it past CAF Champions League group stage.

With Mamelodi Sundowns, the runaway leaders in Group A having already qualified, Al Ahly need a positive result over their Sudanese opponents Al Hilal this weekend. The Sudanese side managed to hold Mosimane’s side to a goalless draw in the first match in Sudan.

The reigning champions have had an indifferent continental campaign which posed a threat to their hopes of progressing to the quarterfinals of the competition.

Thursday afternoon’s training session took place under the watchful eye of club President ‘Bibo’ who joined Mosimane and his side at their El Tetsh training base.

The Al Ahly owner has often pledged his support to his team be it financially or otherwise. But perhaps his presence at their training underlines just how important Sunday’s match is for the Red Eagles if they are to mount a defence of their CAF title.

Good news for Mosimane is that it appears he will be able to call on the duo of Percy Tau and Luis Miquissone, who look to have shaken off their respective injuries to form part of the club’s training.

Should they get maximum results on Tuesday, Al Ahly will then find out their fate when the CAF Champions League quarterfinal draw takes place on Tuesday 5 April.