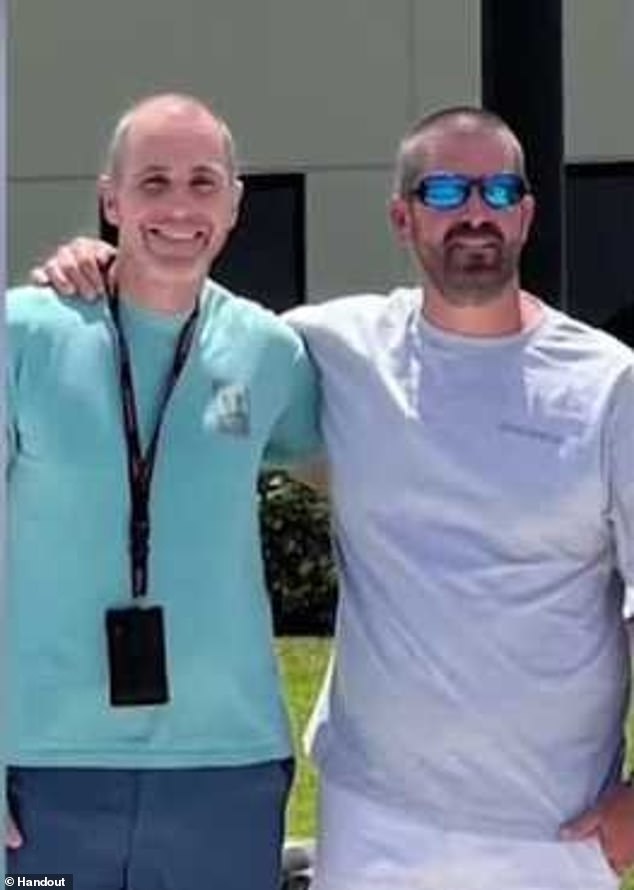 A passenger aboard a flight from the Bahamas to Florida who successfully landed the plane despite having no flight experience has been pictured.

The passenger – who has not yet been named –  was on board a Cessna 208 Caravan traveling from Leonard M. Thompson International Airport in Marsh Harbor, the Bahamas, on Tuesday when the pilot suffered a medical emergency and fell unconscious.

The man, pictured wearing light-colored clothes and sunglasses, quickly sprang into action and managed to successfully land the plane in a feat that one JetBlue pilot said was ‘nothing short of a miracle.’

He was aided by Robert Morgan, an air traffic controller, who printed out a picture of the cockpit controls to to guide the passenger through the steps of flying and landing the plane as he struggled with the navigation system.

After he successfully landed, Morgan told WBPF, the two embraced on the tarmac of the Palm Beach International Airport in Florida, where they were pictured.

‘It felt really good to help somebody, and he told me that he was going to go home tonight to see his pregnant wife,’ Morgan told the news station in the aftermath.

A passenger who successfully landed a plane traveling from the Bahamas to Florida after the pilot passed out is pictured, right, with Robert Morgan, an air traffic controller who helped guide him during the flight

The passenger didn’t even know how to turn the navigation system on, and did not know the plane’s location other than ‘off the Florida coast’

Morgan said he was on his break reading a book outside, when he received an emergency call that a passenger with no flight experience was trying to land a commercial flight safely.

He revealed that he has never actually flown a Cessna 208 Caravan plane before, but he is an FAA-certified flight instructor with around 1,200 hours of flying time under his belt.

Morgan said he quickly decided to print out a layout of the cockpit, which he used to guide the passenger through the steps of flying and landing the plane as he struggled with the navigation system.

‘I just feel like it was probably meant to happen,’ Morgan told the news station. ‘I knew the plane was flying like any other plane. I just had to keep him calm, point him to the runway and tell him how to reduce the power so he could descend to land.

Morgan, right, printed out a picture of a Cessna 208 Caravan plane to help guide a passenger through the steps of flying and landing the plane

Morgan had never flown a Cessna 208 Caravan plane, he later revealed, but is an FAA-certified flight instructor with around 1,200 hours of flying time under his belt

Audio of the man’s conversation with air traffic control, obtained by DailyMail.com, though, reveals just how tense the situation was.

In the recordings, the passenger could be heard telling air traffic control in Fort Pierce, ‘I’ve got a serious situation here,’ as he flew over the Florida coastline around 70 miles north of his destination.

‘My pilot has gone incoherent. I have no idea how to fly the airplane.’

Do you know the brave passenger who landed the plane?

The audibly shocked air traffic controller in Fort Pierce then told the passenger that he would try and locate the plane when the emergency call came through over his radio.

‘Maintain wings level and just try to follow the coast, either north or southbound,’ the controller said.

‘We’re trying to locate you.’

For the next four minutes, audio showed the passenger remained remarkably calm as he tried to work out what to do and wait for the air traffic controller to find his aircraft.

‘Have you guys located me yet?’ he asked after a while.

‘I can’t even get my nav screen to turn on. It has all the information on it. You guys have any ideas on that?’

The man was eventually found flying off the coast of Boca Raton, and Morgan, at the Palm Beach airport, eventually managed to talk him down as he guided him on how to land the plane.

The landing was a little wobbly, but ultimately safe and successful according to air traffic control, who were clearly astounded at the passenger’s ability to settle the plane on the runway with no prior experience whatsoever.

‘You just witnessed a couple passengers land that plane,’ the dumbfounded air traffic controller said over the radio.

Another pilot on the runway said: ‘Did you say the passengers landed the plane?’

The pilot, who remained unconscious was later taken to the hospital as a result of the unknown illness. His condition remains unknown.

An aviation expert told CNN it is not uncommon for small turboprop airplanes such as the Cessna 208 Caravan to fly with only one pilot, particularly when the flights are private.

An FAA spokesperson confirmed they were investigating the incident and said the pilot suffered a ‘possible medical issue’ – though did not provide further details on his condition.

The pilot was taken to hospital, and the passenger safely made it off the plane

The small aircraft can be seen on the tarmac at Palm Beach airport, having successfully landed

Justin Dalmolin, a JetBlue pilot, was told to delay his takeoff to give the unnamed Cessna passenger space and time to land the plane.

‘The level of difficulty that this person had to deal with in terms of having zero flight time to fly and land a single engine turbine aircraft is absolutely incredible,’ said an amazed Dalmolin.

He told ABC 25: ‘The incredible part is not just flying the aircraft but obviously the most difficult thing which is configuring the aircraft for approach and landing. And then landing it, and that to me, for a zero time pilot.

‘I remember my first days when I first started flight training, I was white-knuckled and sweating for my first ten hours of training.’

Dalmolin said it was lucky it was daylight so the passenger at the wheel could see where he was going because it would have been extremely difficult if it the saga had unfolded overnight or in heavy fog.

‘You know it’s nothing short of a miracle and I’m really glad for them and their families they had such a great outcome,’ said Dalmolin.

John Nance, an aviation expert, also told ABC 25 that the landing of such a complex plane by someone without any flying history was a remarkable feat.

‘This is the first time I’ve ever heard of one of these being landed by somebody that has no aeronautical experience,’ Nance said.

‘The person on the airplane who had no aeronautical experience listened very carefully and obviously followed instructions with great calm.

‘That’s what made the difference.’

Passenger: I’ve got a serious situation here. My pilot has gone incoherent. I have no idea how to fly the airplane but I am…

ATC: Do you know how to operate the transponder 7700?

Passenger: Stand by, let me see. Repeat that frequency default.

ATC: Disable and put 7700 into your transponder.

ATC: Can you say again what the situation is?

ATC: That came in a little broken. What was the situation with the pilot?

Passenger: He is incoherent. He is out.

ATC: Roger. Try to hold the wings level and see if you can start descending for me. Push forward on the controls and descend at a very slow rate.

ATC: Continue the descent and try to level off at 5,000 feet.

Passenger: 10/4 What heading do I need to be at? Give me a… heading because I have no control. (Muffled…)

ATC: Maintain length level and just try to follow the coast either north or southbound. We’re trying to locate you.

ATC: If able, hit the ivent button on the trans monitor.

Passenger: Which one is it?

ATC: On the trans monitor there is a button that says ivent. Hit the ivent button for me.

Passenger: I, the I what?

Passenger: I’m looking for it; can’t find it.

ATC: No problem. Just continue to stay wings I will maintain 5,000 and follow the coast and we’re gonna try to find you here on the radar.

Passenger: You guys located me yet? I can’t even get my screen to turn on. It has all the information on it. Any ideas on that?

ATC: Just continue the slow descent until you get to 5,000 feet and continue northbound over the beach and we’ll get you further instructions and get you toward an airport.

Passenger: So, northbound over the beach?

ATC: Do you have a cellphone with you?

Passenger: Yes, I do.

ATC: Do you have a cellphone number? Give me the phone number and we’ll try to get you in touch with someone that can help you.

ATC: Are you still with me?

ATC: You still with me? Fort Pierce Tower.

Passenger: I’m going off the coast, it looks like a little bit southwest.

ATC: I’m having trouble hearing you. I heard you said something about southwest. Can you say again your cellphone number?

Passenger: (Muffled) I have no idea how to stop the airplane. I don’t know how to do anything.

ATC: Did you hear the transmission? Can you hear me?

ATC: While you’re making that call, just remain on the frequency and we’re gonna try and get you some more help. Is the pilot unconscious?

ATC: Can you tell me how many personnel are on the plane with you?

ATC: Palm Beach approach is gonna talk to you. They’re gonna direct you to the Palm Beach Airport. You should hear them on this frequency momentarily.

(Other people butt in. Long silence)

ATC: This is Fort Pierce tower – are you on the frequency?