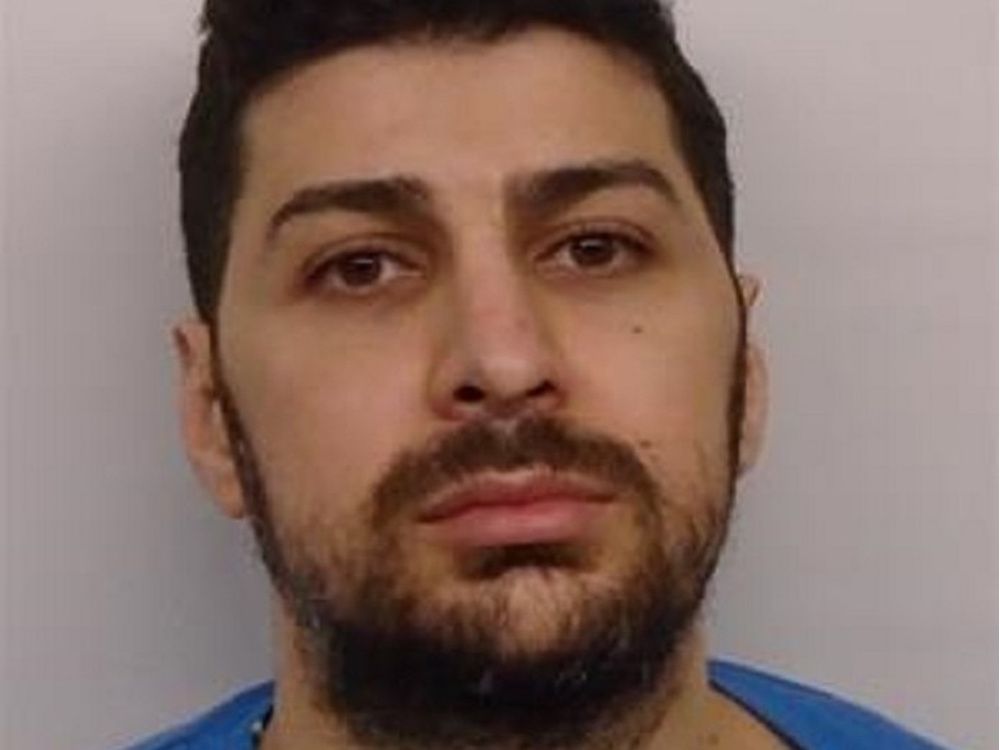 Coquitlam RCMP confirmed Saturday that two photos they released a day earlier as suspected accomplices in the brazen jailbreak of accused killer Robby Alkhalil are fake.

But Const. Deanna Law said the men in the pictures, which are available on websites selling fake identification, resemble the two people who arrived at the North Fraser Pretrial Centre in Port Coquitlam Thursday purporting to be contractors there to do repairs.

Instead, they used a plasma torch to extract Alkhalil, 35, who is in the midst of a gangland trial on murder and conspiracy charges.

The three men then left the compound at 1451 Kingsway in a white Econoline van about 6:48 p.m. Police have been hunting for them ever since though the van has now been located.

It is believed that the suspects who helped Alkhalil escape bear a close resemblance to the photos they left behind, but those images are not them, Law said. As with many complex investigations, the information is rapidly changing as we progress. For this case, time is crucial and it’s important to keep the public as informed as possible even though the facts could change as we go.

Farnworth said the escape appeared to have been sophisticated and well-planned with “the van and the uniforms.”

“There’s a full-on investigation into what happened,” Farnworth said, adding that the probe would “identify how it happened, why it happened, and then ensure that if there were any gaps or failures that they are changed and fixed so this cannot happen again.”

He said he understands the public concern about the jailbreak.

“What this shows is that we always need to be making sure that regarding security in our facilities the proper protocols are being followed and it is as tight as possible.”

One source said that if Alkhalil is not found quickly, he will likely never be found.

Law said police are well aware that Alkhalil might try to flee the country “using his connections across Canada, the United States, Europe and Asia.”

Time is of the essence to get Alkhalil’s face in every airport, train station, taxi, rental car company or anywhere else that he may be hiding, she said.

A Canada-wide warrant has been issued for his arrest while an Interpol Red Notice is in the works.

Alkhalil is charged with the first-degree murder in January 2012 of gangster Sandip Duhre in the lobby of the Sheraton Wall Centre. He is also charged with conspiring with others to murder Sukh Dhak, an associate of Duhre’s, between Aug. 6, 2011 and Aug. 8, 2012. He has pleaded not guilty to both counts.

The trial of Alkhalil and co-accused Larry Amero, who is only charged with conspiracy, is scheduled to continue Wednesday even in Alkhalil’s absence. Closing arguments in the 13-month long jury trial began in early July.

B.C. Supreme Court Justice Miriam Maisonville told the six-man, six-women jury Friday that Alkhalil was missing and that the trial would carry on without him.

“Members of the jury, by now some or all of you will have heard that Mr. Alkhalil has absconded. I will instruct you later on what use, if any, you can make of that fact,” Maisonville said. “I remind you again that both accused, including Mr. Alkhalil, who is not before you, is presumed innocent until the Crown has proven that they are guilty beyond a reasonable doubt.”

“The trial will continue in the absence of Mr. Alkhalil, and the Crown will have to prove his guilt to you beyond a reasonable doubt, as well as Mr. Amero.”

She also told jurors “not to pay any further attention to any media accounts nor anything that you read or hear on the internet, social media or otherwise.”

“This direction is in accordance with my initial directions to you that you must decide this case on the basis of evidence that is presented in this courtroom,” Maisonville said.

As closing arguments began, a Crown prosecutor told the jury that the main evidence concerning motive was the high-profile Kelowna murder on Aug. 14, 2011 of gangster Jonathan Bacon.

The trial heard that Bacon was one of five people, including Amero, who were in a Porsche Cayenne that was sprayed with bullets outside the Delta Grande Hotel in Kelowna. Amero, the driver, was seriously injured in the shooting.

The Crown had previously said that the two accused were members of the Wolfpack — a rival of the Duhre/Dhak group.

Law said that Alkhalil is considered extremely dangerous. She said police were initially called by North Fraser staff about 7:30 p.m. on Thursday, 42 minutes after Alkhalil and his accomplices left.

“At this time, the RCMP is working closely with B.C. Corrections and the investigation is ongoing,” she said.

Alkhalil is described as 5’10” and 166 pounds with short black hair and brown eyes.

“If you see Alkhalil, police ask that you not approach him and instead call 911 immediately,” Law said.

Alkhalil is not the first person to escape from North Fraser.

In August 2008, Dean Douglas Sykes posed as his own cellmate and was taken to court where he was released as the other man. When he was caught a few days later, he received a 14-month sentence.

And in November 2007, gangster Omid Tahvili bribed a prison guard who helped him escape from North Fraser. He was never recaptured.

The B.C. corrections officer, Edwin Ticne, was later sentenced to three years, three months in prison for breach of trust. Crown lost an appeal to increase the sentence.

Tahvili’s escape was recorded by video cameras showing that Ticne “escorted Mr. Tahvili through four security doors between his living unit and the public exit from the pretrial centre where they parted,” the B.C. Court of Appeal noted.

Ticne then “facilitated Mr. Tahvili’s passage through the security doors by pushing buttons that alerted staff in the central control area who unlocked the doors after identifying the respondent and a person apparently a contract cleaner.”

Tahvili had changed into clothes matching those worn by contract cleaners at the pretrial centre.

Ticne left the jail and “drove to a near-by service station where he was to receive $50,000 for getting Mr. Tahvili out of prison,” the court ruling said. However, “No one met him and he received no money.”

At the time of his escape, Tahvili was awaiting sentencing for kidnapping, sexual assault and threatening death or bodily harm. He was sentenced in absentia to six years and three months.