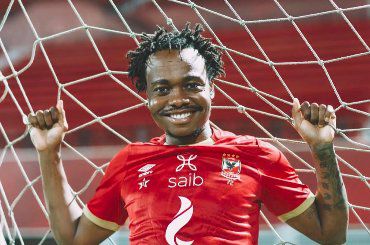 Percy Tau’s hopes of featuring at a second Fifa Club World Cup have been dashed with the Al Ahly star suffering an injury on the eve of the tournament!

The Bafana Bafana attacker picked up an injury during Al Ahly’s humiliating 3-0 loss against Smouha on Thursday in the Egyptian league Cup and had to be withdrawn with 20 minutes to go.

Pitso Mosimane’s Al Ahly are gearing up for the 2022 Fifa Club World Cup which gets underway next weekend.

Mosimane however will have to make do without a number of his stars who are on international duty at the AFCON while Percy Tau has since been added to the list of casualties!

Percy Tau started in both of Mamelodi Sundowns’ losses in the tournament and managed to get their only goal against Jeonbuk Motors as well last time out!

“The player needs four weeks to recover from the injury as well as returning to the team’s full trainings. Tau started his rehab program on Saturday once the scans’ result showed the extent of his injury,”

The winner from Pitso Mosimane’s opening clash will face Brazil’s Palmeiras in the semi-finals while Chelsea will face the winner of the second knockout stream in semi-final two.

Percy Tau already has five goals and one assist in just eight appearances since joining the club in a blockbuster transfer from English Premier League outfit Brighton and Hove Albion last year.

READ NOW: AMAZULU BOSS SANDILE ZUNGU WAGES WAR ON KAIZER CHIEFS OVER THE MANNER IN WHICH THE AMAKHOSI HAVE ‘TAPPED’ UP SIYETHEMBA SITHEBE!