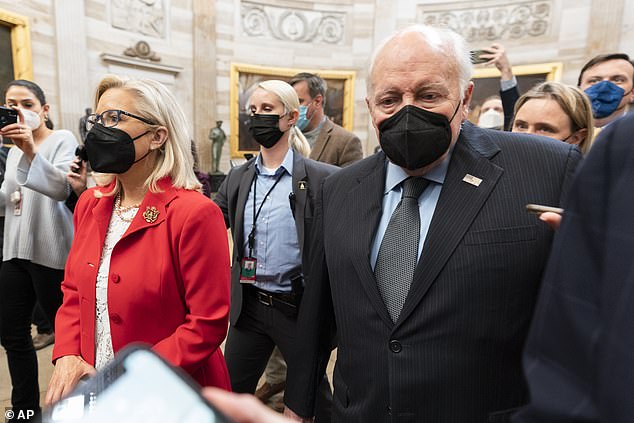 Just two current or former House Republicans were on hand for a moment of silence House Speaker Nancy Pelosi organized to mark Jan. 6th – and one of them left office in 2009.

Pelosi presided during the event marking the first anniversary of the Jan. 6th Capitol riot – with Rep. Liz Cheney serving as the only elected Republican present. The Wyoming lawmaker was joined only by her father from the GOP, making for a total of two current or former Republican House members.

Pelosi had announced the moment of silence as one of a series of events to mark the anniversary days in advance, and had asked lawmakers to tell her office if they planned to attend.

But when it came time for the moment at noon Thursday, Cheney, a member of the select House committee probing Jan. 6th, didn’t have much company on her side of the aisle.

Former Vice President Dick Cheney walks with his daughter Rep. Liz Cheney, R-Wy., vice chair of the House panel investigating the Jan. 6 U.S. Capitol insurrection, in the Capitol Rotunda at the Capitol in Washington, Thursday, Jan. 6, 2022. They were the only current or former Republican lawmakers present for a House moment of silence marking Jan. 6th

Her father, former Vice President Dick Cheney, was there alongside her. The elder Cheney served as a member of the House leadership before serving at vice president to George W. Bush.

Cheney stood next to his daughter on the otherwise abandoned right side of the aisle during the moment of silence.

The only Republicans who took part in the moment of silence marking Jan. 6th were Rep. Liz Cheney (R-Wyo.) and her father, former Vice President Dick Cheney

During an opening prayer, House chaplain Margaret Kibben said: ‘As compatriots, we are too often separated by politics and perspectives, individual certainties and intractable opinions’ and prayed for unity.

‘Today one year ago the Capitol and those who work with it were targeted in a violent insurrection,’ Pelosi said in her own remarks to the chamber.

Pelosi, who created the Jan. 6th committee after a split with Minority Leader Kevin McCarthy over its membership, said: ‘The insurrection sought not only to attack the building, but to undermine democracy itself.’

‘When the violent assault was made on the Capitol, its purpose was to thwart Congress’s constitutional duty to validate the electoral count and to ensure the peaceful transfer of power. But the assault did not deter us from our duty,’ she said.

Among those McCarthy wanted to install on the panel was Rep. Jim Jordan (R-Ohio), who panel members have now asked for testimony.

Cheney was not joined by the only other Republican on the Jan. 6th, retiring Rep. Adam Kinzinger (R-Ill.).

But Kinzinger made clear on Twitter his absence was not a protest. ‘ Wish I could be there too, but I’m on baby watch. I am in spirit,’ he tweeted.

Pelosi greeted the Cheneys on the floor after the event concluded.

Dick Cheney, who served as chair of the GOP conference and as party whip when he was in the House, took a shot at party leaders who have sidelined his daughter. Cheney was forced to give up her own leadership post after she voted to impeach Donald Trump after Jan. 6th.

‘It’s not leadership that resembles any of the folks I knew when I was here for ten years,’ he told reporters in the Capitol.

Asked if he was disappointed with how leaders treated his daughter, Cheney said: ‘My daughter can take care of herself.’

Asked about the low GOP turnout at the moment of silence, he responded, Liz Cheney responded: ‘I think it’s a reflection of where our party is. … very concerning.’

She added: ‘I think the future of our country is at stake. And there are moments when we all have to come together in order to defend the Constitution.’ Asked about Trump’s influence – he has been weighing in in primaries and runs far ahead of other in early 2024 polls, she said: ‘Look, I think that a party who is enthralled to a cult of personality is a party that is dangerous for the country. And I think that we’ve really got to get to a place where we’re focused on substance and on issues of policy.’