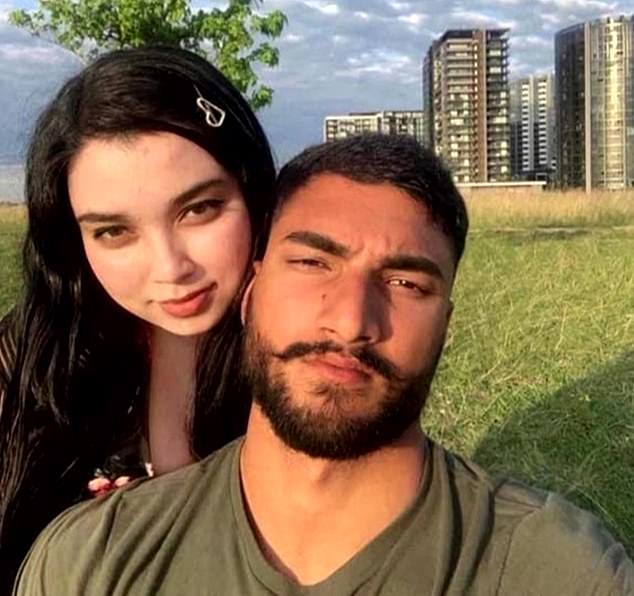 The devastated parents of a teenage girl whose body was found in a bath of acid at a residential apartment block say their beloved daughter cut all contact with them shortly after moving in with her husband.

The remains of aspiring surgeon Aminah Hayat, 19, were discovered in the unit she shared with Meraj Zafar on Sunday in North Parramatta, in Sydney‘s west.

He has been charged with her grisly murder after handing himself in to police on Monday following a public appeal by detectives.

Meraj Zafar, 20, has been charged with the alleged murder of his wife Aminah Hayat, 19, (pictured together)

Ms Hayat’s father Abu Hayat and mother Mahafuza Akter said they had little contact with their daughter after she moved in with the alleged killer about six months ago.

‘I love my daughter. I want my daughter (back),’ Mr Hayat told 7News.

The teen, who moved to Australia when she was younger with her parents, was in her second year of university studying medicine with dreams of becoming a surgeon.

‘Everyone hoped that she would become a big doctor,’ Mr Hayat said. She wanted to help people.’

Ms Hayat (pictured), who moved to Australia when she was younger with her parents, was in her second year of university studying medicine with dreams of becoming a surgeon

Court papers revealed Ms Hayat may have been slumped in the tub for more than a day before she was found.

Police smashed their way into the apartment in North Parramatta on Sunday after worried relatives raised the alarm.

In the couple’s salmon pink bathroom at their rented $320-a-week two-bedroom unit, they allegedly found the Aminah’s remains dissolving in the acid bath.

Detectives launched a public appear to find Zafar, who was seen driving away from the scene in his truck.

Zafar’s lawyer Mohamad Sakr faced court on his behalf on Tuesday and said the alleged killer  was ‘distraught’ about being in custody after his first night behind bars.

Ms Hayat’s hairdresser Sadia Ali said she was heartbroken by the horrific tragedy.

‘It’s terrible news,’ she told Daily Mail Australia. ‘She was such a beautiful soul.’

Locals recalled Ms Hayat as being an ideal neighbour but rarely spoke to her. Zafar told neighbours he was from Pakistan but they said his English was excellent.

Next door neighbour Ali Safari identified the couple from social media photos and said Ms Hayat had ‘seemed very happy’ and was ‘smiling and pleasant’.

He added: ‘She was always playing music. She was quiet, I never spoke with her.’

As well as his truck, neighbours said Zafar also owned a black BMW coupe which was allegedly searched and removed by detectives.

Meraj Zafar, 20, attended a police station on Monday after a public appeal to find the bearded truck driver seen here

Mr Sakr did not apply for bail on behalf of Zafar at court this morning and it was formally refused by Magistrate Shane McAnulty.

It remains unclear if the accused will apply for bail when the case resumes at Parramatta Court on April 5. His legal counsel said he couldn’t comment on whether Zafar had injuries, or if he had the support of family members.

On Monday, police released CCTV images of a man – alleged to be Zafar – driving a tipper truck, sporting a dark beard and sunglasses, in the hopes he could assist with inquiries into Miss Hayat’s death.

A truck matching the police description was later found at a Bunnings in Greenacre in south-west Sydney and was seized by detectives to undergo forensic tests.

Police allege it was the same hardware store where he purchased the hydrochloric acid to dispose of his wife’s body.

Zafar attended the police station in a short time later.

Parramatta Police Area Commander Superintendent Julie Boon said police had found her body in the bathroom of the first-floor unit along with chemicals.

‘The officers forced entry into the unit and inside the bathroom they found the body of a female,’ she said.

‘I can confirm there were chemicals found inside the bathroom of the unit. I can’t confirm what they were.

‘The scene was very challenging for arriving police. When they did arrive and found chemicals at the unit, they retreated and called other units.’

Zafar will return to court in April.