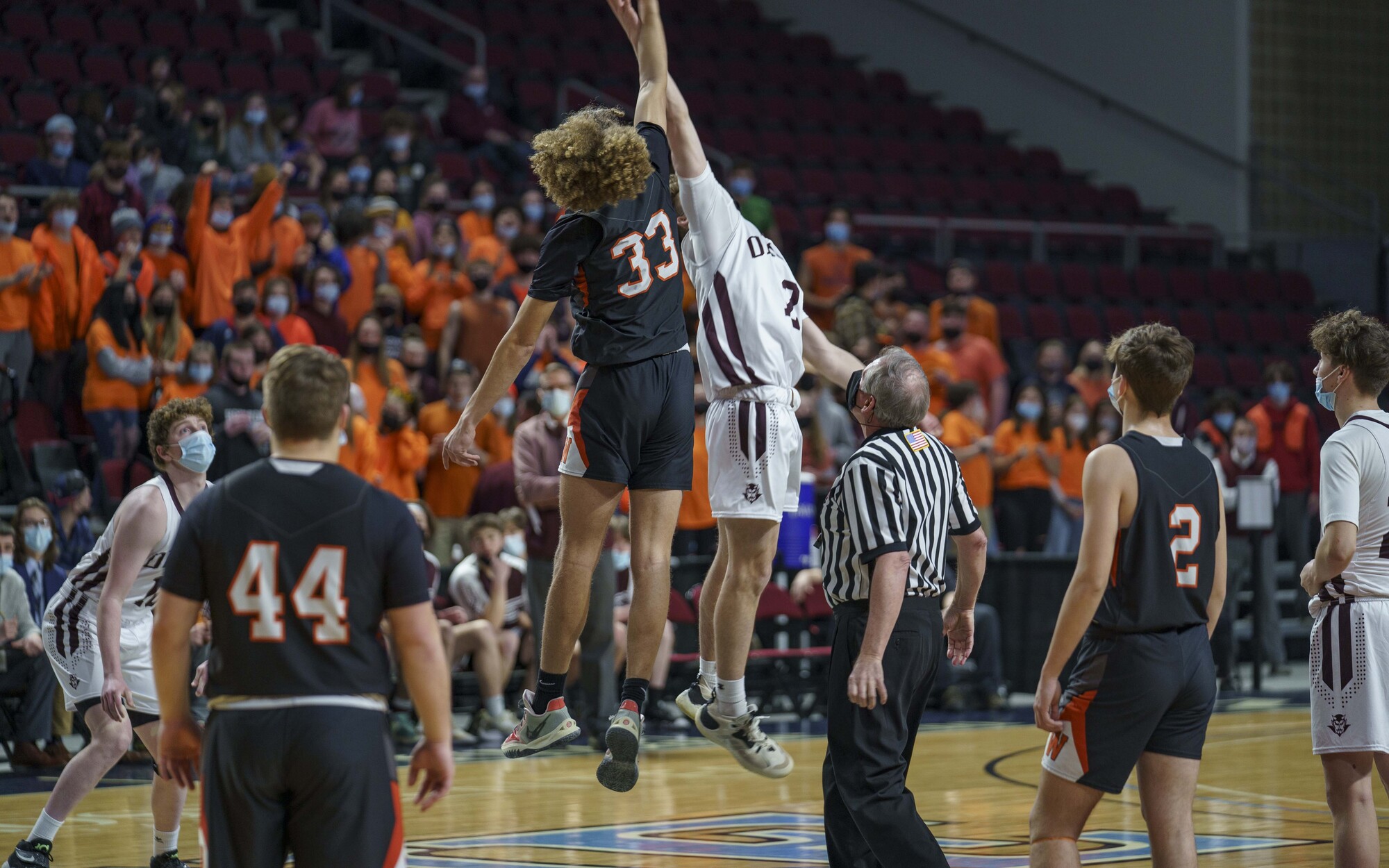 The Orono Red Riots are one of the younger teams in this year’s high school basketball tournament with just one senior on the roster and a bevy of sophomores and freshmen playing key roles.

So it should be no surprise that their tourney debut at the Cross Insurance Center on Friday night was fueled by the roar of the crowd.

“We feed off positive emotions so much,” said junior forward Ellis Spaulding, who hit two key 3-pointers in the fourth quarter, the second with 59 seconds left to help the Red Riots edge Winslow 59-54 in a Class B North quarterfinal.

“We take it all in and just produce it back out onto the court. We love having everybody there to support us.”

Spaulding’s final 3-pointer was part of a 10-2 run that enabled coach Ed Kohtala’s second-seeded Red Riots to break free from a 49-49 tie forged on a follow-up basket by Winslow’s Jason Reynolds with 2:14 to play and advance to play No. 11 John Bapst of Bangor in Wednesday’s 7 p.m. semifinal.


“If you keep fighting, keep playing, stay aggressive, in close games like that sometimes you get a bounce, and we got a couple of bounces but it was really a great high school game,” Kohtala said.

Andrew Poulin scored 23 points and Jason Reynolds added 16 for No. 7 Winslow, which ends its season at 13-6.

Orono, which lost to Winslow in a 2020 preliminary-round game that only three members of its current roster — Spaulding, Lucas Allen and lone senior Javier Alicea-Santiago played in — scored the last seven points of the first half to take a 23-22 lead into intermission.

That run grew to 13 unanswered points and 20-2 midway through the third quarter as Winslow went more than 5 minutes between field goals while Orono built its lead to as much as 36-24 on a 3-pointer by Will Francis with just over 3 minutes left in the period.

Winslow then scored seven straight points to draw within 36-31 on a 3-pointer by Reynolds with 52.4 seconds left, but Will Francis countered with another 3-pointer to give Orono a 39-31 lead entering the final quarter.

Poulin turned offensive aggressor in the fourth quarter, with his three early baskets in the period leading to a deep 3-pointer by teammate Nick Girard that tied the game at 47-47 with 3:05 to play.

The game was still tied at 49-49 before Orono took advantage of back-to-back turnovers by Winslow, with a basket by Walston and a 3-pointer from the left corner by Spaulding off a feed from Alicea-Santiago giving Orono a 54-49 lead with 59 seconds left.

“I knew [we] had a two-point lead and there was a minute to 45 seconds left and I was feeling it all night. I was feeling confident so I took the shot and I made it,” Spaulding said.

Spaulding added two free throws before Poulin finally answered for Winslow with a drive to cut the gap to 56-51 before Ben Francis put the game away, first by making 1 of 2 from the line with 21 seconds left and adding a fast-break layup seconds later.

“We knew when we went up 12 that they were going to have a run back,” Walston said. “Basketball’s a game of runs, especially when it comes to the tournament and it doesn’t matter what seed you are. We knew they were going to come back. We were prepared for it, we just had to stay composed for it as we did and we had to go on a run of our own and that big shot at the end helped us out.”