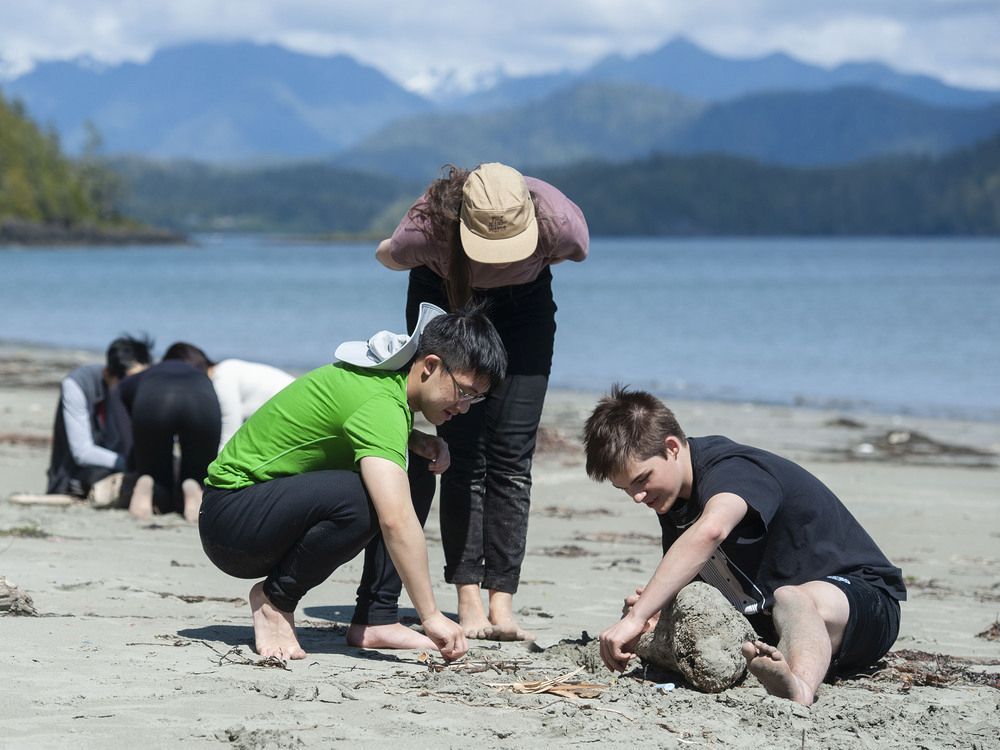 You don’t have to be particularly lucky to see a grey whale, sea lion or sea otters on your way to summer camp on Vargas Island, off Tofino.

Or maybe even an orca or harbour porpoise as you make the 10-minute crossing — and if you want to stop and watch, the skiff’s captain will happily oblige.

“Your stay begins before you get there,” says Darryl McKenzie, CEO of the non-profit Cedar Coast Field Station Society, as he pilots across Clayoquot Sound.

As you pull up to the dock at this time of year, juvenile coho create tiny expanding rings of ripples as they jump near shore.

Once the boat’s secured, a short uphill walk brings you to Cedar Coast Field Station, an off-grid lodge with walled tents outside for guests, and a couple of micro-cottages out back for scientists researching the immediate biosphere.

Cedar Coast’s vision is to preserve ecological health through place-based research and education, focusing on the cultural and biological diversity of Clayoquot Sound. It gives youth groups, families, and anyone wanting to just get away from the rat race and let nature dictate the day, a place to learn and carry out research within the UNESCO Biosphere region.

“The setting is so gripping, there is so much here, you’re forced to slow down,” said Tom Harding, a science teacher at the Academy. “You’re not taking your pace from the city and imposing it on here.

“For those who want to get away, slow down, etc., once you get here you realize, ‘Oh, there is so much going on here.’”

The ecological field station is the realization of a dream for Simon Nessman, who grew up on Hornby Island, attended Georges P. Vanier Secondary in Courtenay, and who is one of the most sought-after male models in the world. Nessman, who co-founded the Cedar Coast Field Station Society, is on its board and can still be seen working on the property.

Cedar Coast incorporated as a B.C. charity in 2017 and began operating out of rented space in the Vargas Inn before moving to its current 45-acre site in an abandoned lodge that had begun life in the 1980s with the quixotic goal of becoming a museum for wartime aircraft before its backers ran out of money in the 1990s.

“We reflected and thought the most environmentally friendly building is one that exists,” Cedar Coast’s McKenzie said.

Far from being bored, the teens at Cedar Lodge this past week couldn’t believe how fast the time flew by.

“Yesterday, I came here for three hours and I did not want to go back,” said Ankita Biswas, a Grade 11 student at West Point Grey, after she and her schoolmates honed their fire-building skills on one of Vargas Island’s wide, empty beaches.

“And everything’s bigger here, because it can be. It doesn’t have to adapt to what humans have done to the environment.”

Tidal pools at beach’s end teem with life, some with such vibrant verdancy you wonder if they glow at night, while starfish and sea gooseberries — little comb jellies that look like overstuffed droplets of water — dot the sand.

And sometimes, you get to watch the coast wolves scavenging at the far end when the tide’s out.

“It’s funny how you turn into a kid out here,” McKenzie said as a visitor to the island kept stopping to examine, sniff or feel the trove of biological treasures that lie everywhere. “It always amazes me.”

Solar panels provide the electricity and a wood-burning boiler the hot water, with a propane generator on hand for backup. The drinking water is purified by particle and UV filters, while a pond dug out back supplies water for the toilets and gardens.

One hundred thousand litres of drinking water and a pond full of grey water sounds like a lot until you consider Canadians go through an average of 329 litres a day.

Cedar Coast can sleep 33 people, so if the camp was full and water consumed at the average Canadian rate, guests would run out of water to drink sometime during the 10th day. Staff use the limited supply as an opportunity to teach visitors about conservation techniques (don’t leave taps running, if it’s yellow let it mellow, in-and-out showers, etc.).

“You think about how many people we’re going to put through this facility this summer, just the concept of having to really think about what you do and how you do it, where your energy is coming from,” McKenzie said. “How many people think about that?

“How many kids think about that while they’re taking a bath or a shower, how long they’re running the water? Then you show the kids (the four catchment tanks) and they’re half full because it hasn’t rained in a month. You guys are here for a week, how are we going to do this?”

It’s interesting watching their behaviour change as the thought of scarcity sinks in, he said.

“Number-one, you realize living off the grid is maybe not as rustic as you thought,” McKenzie said. “But also, just the attention and thought that goes into how and why you do things.

“I think getting off your screen and becoming aware of that is a pretty cool experience.”

Besides the birds that live on the island or use it as a layover during migrations, it is home to a pack of maybe eight coast wolves that roam the mud-slick trails that wind around the old-growth Sitka spruce, western red cedars and forest bogs — paw prints and scat giving away the pack’s favourite paths down to the shore.

During walks, visitors learn about salmon migration and health, about aquaculture and the potential problems that may occur.

“We learned about invertebrates, which I never had an interest in before and now I’m more interested in,” West Point Grey’s Biswas said.

“Honestly, I think this is the kind of thing that every person my age in this era of technology, this is what we really need, to get out here without your device and just enjoy the world around us. We really don’t get to enjoy it that often.”

Marcie Callewaert, a teacher, began working with Cedar Coast as an educator in 2019. She and her husband Skookum John are full-time residents, living in a beach-front cabin that John’s parents built.

“It’s always exciting to see the students who have never been to the beach before and seeing their joy, or just their amazement at things some of us may take for granted,” Callewaert said.

“I find for the school students, they might have gone on vacation to Tofino before with their family or something, but coming out here to Vargas where it’s off-grid and you’re just so much closer to nature … everything is controlled by the weather, the tides, you really get a feel for that.”

This year, the field station is offering six-night family packages for the first time. So far, five families have signed up, one with an infant and the other with teens.

Along with the science and ecology, there are other summer camp activities: sea kayaking and canoeing, whale watching with local vendors, archery, nightly campfires, arts and crafts such as the two big jellyfish made from plastic that was collected along the beaches during clean-ups — they hang outside the lodge and, at a glance, could pass for Ernie and Bernie from a Shark’s Tale.

When Harding, their science teacher, asked the West Point Grey teens which part of the three-night stay was their favourite, each had a different answer, he said.

“Yesterday, we started at six o’clock in the morning and we … we’ll call it the Zen of birding, tying the connections to Vargas from the stuff we’re doing in the classroom. It was three hours long and the kids loved it. It seemed like 15 minutes because there’s so much here.

“I think the other thing that’s really appealing is the diversity of differing areas. You’ve got your sandyscape here, your rocky outcrops there — way more biodiversity than in Vancouver with all its shoreline and parks.

There are intergenerational programs geared for families, but also programs for kids while the parents go do their own ecological thing for a day.

Biswas said she thinks her little sister, who is seven and in Grade 2, would love it at Cedar Coast — after perhaps complaining about the weather for 20 minutes if it didn’t happen to be nice out.

While Biswas grew up playing in her family’s backyard, her sister’s playtime consists of being on her tablet.

“We live in this area of technology where we think we have to move forward in order to progress, but I think we should slow down.”

Why go so fast, she asked. What’s the race?

“With the way we’re going right now, we won’t have this forever. Let’s enjoy it and preserve it.”