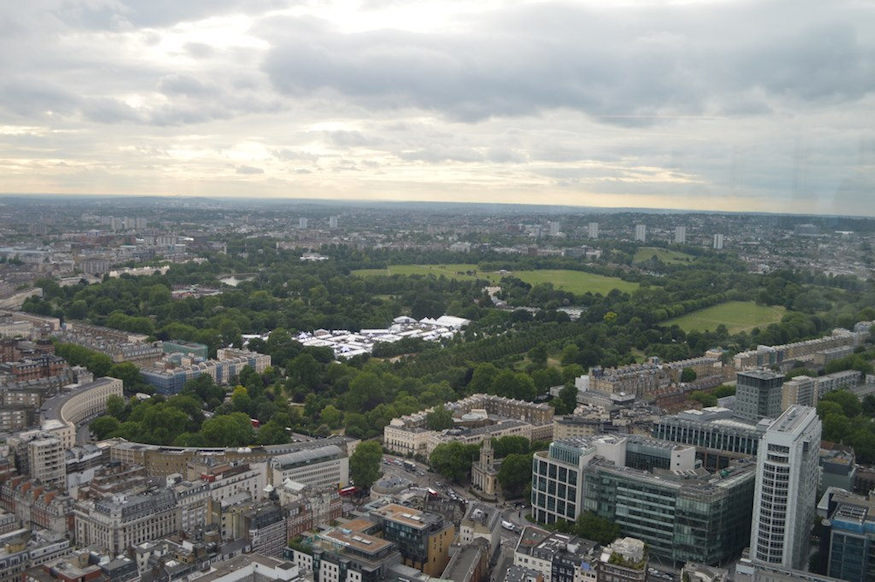 London’s boroughs have been in place for over 50 years now, with clear boundaries between them, often formed by rivers or streams, main roads or footpaths. Most of these boundaries cause no problems, but a few of them are situated in interesting places:

The Broad Walk path, running north-south through Regent’s Park, splits this Royal Park into the boroughs of Camden and Westminster. The majority of the park, including London Zoo, and the open-air theatre, are in Westminster, while a sliver of open fields, football pitches and a playground to the east reside in Camden. This route has long been a dividing line. It’s easy to find old parish boundary markers lurking among the plane trees to the east of the path.

Due to the close proximity of Camden Town, we’d always assumed the zoo itself was in the Borough of Camden, until we spotted the zoo license displayed on its railings, issued by Westminster Council.

Kensington Palace is, predictably, in the Royal Borough of Kensington & Chelsea. But Kensington Gardens, which the palace overlooks, are in the borough of Westminster.

Strangely, the borough boundary runs the length of a footpath name The Broad Walk — the same name given to the path which cleaves Regent’s Park in two.

The Tower of London is in Tower Hamlets. Seems obvious, right? And it is, until you bring royal gun salutes into it (bear with us here).

On special days, royal birthdays and the like, a gun salute takes place. A standard salute is 21 rounds, but if the salute is fired in a Royal Park (they often take place in Hyde Park), then an extra 20 rounds are added, purely because it’s a Royal Park.

But, when a salute takes place at the Tower of London, it’s 62 rounds (the standard 21 + 20 because it’s a Royal Palace + a mysterious extra 21). It’s a common misconception among gun salute-counting members of the public, that this is because the Tower is in the City of London. In reality, those extra 21 rounds are for the City of London, as in, on behalf of the residents of the City of London to show their loyalty to the monarch. It’s one of those historical quirks that London does so well — but given that the City of London boundary sits right next to the Tower, its residents must get an earful every time a gun salute happens, so it’s only natural that they’d want in on the action.

So to be clear: Tower of London = Tower Hamlets not City of London.

Interestingly, part of Tower Hill Gardens, to the north of the Tower, is in the City of London, while pat of it is in Tower Hamlets. But let’s not confuse matters, shall we?