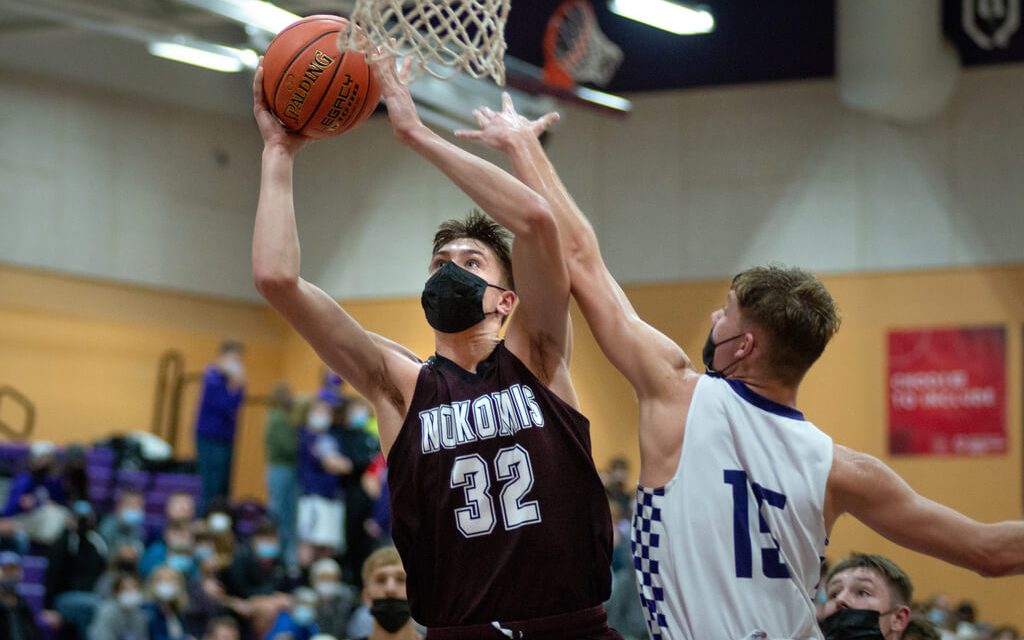 Much of the preseason hype around the Nokomis boys basketball team brought visions of high-flying dunks and fast-breaking action with the additions of talented freshman twin towers Cooper and Ace Flagg.

There certainly was some of each at the Newport school on Thursday evening, but as the regular season approaches its midpoint the Warriors are becoming just as well known for something more fundamental to success — stout defense.

Coach Earl Anderson’s club had limited opponents to 41.9 points per game during its first seven outings and was at it again during its 56-40 victory over Skowhegan in a battle of Class A North contenders.

The Warriors scored the game’s first seven points and never trailed while improving their record to 7-1 and remaining second in the division behind only undefeated Brewer.

“It’s getting better and better. We’re starting to be connected defensively, we’re starting to get the kind of pressure on the ball that really makes your off-the-ball defense so much tougher,” Anderson said. “We do it every day in practice and they’re responding well and starting to believe and trust in each other. It’s starting to show.”

When Skowhegan used strong inside play to rally within 36-30 by the end of the third quarter, Nokomis held the River Hawks scoreless for the first 4:09 of the final period while calmly generating nine unanswered points to secure their sixth straight victory.

“We knew what we needed to do,” said Cooper Flagg, the 6-foot-7 forward who scored 11 of his game-high 34 points during the game’s final eight minutes. “Coach just wanted us to go out there and play like we could play, have fun and it would work itself out.”

Cooper Flagg shot 14 of 23 from the field, including four of his team’s five dunks — junior forward Madden White added the fifth. Flagg also contributed 12 rebounds and five blocked shots for the Warriors.

“He’s a special player, and the good thing about him is he’s so coachable,” Anderson said. “He took two shots in the second quarter that I didn’t like. We had no ball movement and they were off-the-dribble jump shots from the perimeter, but even before I could say anything he said, ‘My bad coach, my bad,’ as he was coming down the court.”

Flagg scored 13 points during the first quarter as Nokomis built a 20-10 lead, and a slam dunk by Cooper Flagg after a steal by 6-foot-6 Ace Flagg (six points, seven rebounds) and then a driving basket by Ace Flagg gave the Warriors a 24-10 cushion.

Skowhegan’s defense stagnated Nokomis for the rest of the half, limiting the Warriors to two points over the last 6 ½ minutes of the second quarter.

A runner by Payson Washburn and a three-point play and jumper from the key by junior forward Adam Savage narrowed the River Hawks’ deficit to 24-17, and a buzzer-beating steal and basket by Levi Obert kept the visitors within 26-19 at intermission.

Nokomis maintained a 30-21 cushion midway through the third quarter thanks to a baseline drive by Ace Flagg and a reverse layup by Cooper Flagg after a Skowhegan turnover.

But the River Hawks, who had lost to Nokomis 59-41 in their earlier meeting at Skowhegan on Dec. 20, went on a 7-2 run to draw within 32-28 on a 3-pointer by Savage before the Warriors used White’s dunk and a basket from the lane by Cooper Flagg to take a six-point edge into  the final quarter.

Nokomis regained control gradually over the final eight minutes, with White making 2 for 4 from the line, Cooper Flagg converting two free throws after a Nokomis technical and an inside basket and older brother Hunter Flagg adding a right-side jumper to build its lead to 44-30 and force a Skowhegan timeout with 5:14 remaining.

Connor Sides made another free throw for Nokomis before Obert ended Skowhegan’s scoring drought on a 3-pointer with 3:51 left, but Sides immediately answered with a 3-pointer and Cooper Flagg scored off another Ace Flagg assist as the Warriors built their largest lead at 51-33.

“We’ve been working so hard [on defense],” Nokomis sophomore point guard Alex Grant said. That’s been one of our biggest focuses, hands out and trying not to get in foul trouble, but even when we do get in foul trouble we’ve got guys who can come in and really fill that defensive role.”

Obert and Savage each scored 12 points to pace Skowhegan, now 5-3.