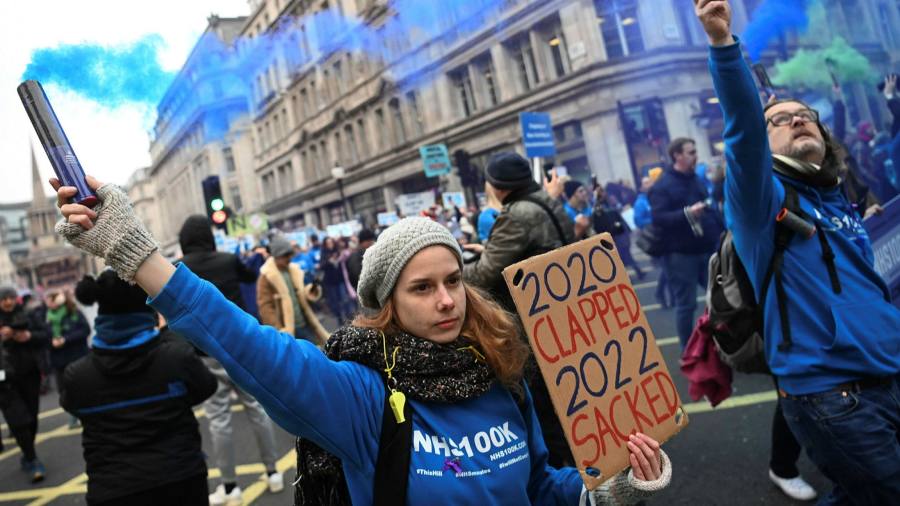 The UK government is poised to drop a controversial requirement that all NHS England staff are double vaccinated against Covid-19 by the beginning of April.

Ministers will meet later today to make a final decision, but a government official said that Prime Minister Boris Johnson and health secretary Sajid Javid had indicated they were “reflecting on the policy”.

The insider added that the obligation for NHS staff to be double vaccinated had been conceived when the Delta variant was the dominant strain but the advent of the milder, albeit highly transmissible, Omicron variant had “changed what we are dealing with”.

A total of 77,591 NHS England staff were unvaccinated as of January 23, raising the possibility that about 5 per cent of the workforce might have to be sacked or redeployed to other roles at a time when the health service is facing severe staff shortages.

The impact of the vaccine mandate would be even greater in London, with 8.7 per cent of NHS employees in the capital yet to receive a single dose, according to the latest data.

The deadline for staff to be fully vaccinated had been set at April 1, in a concession to health leaders who were worried about losing staff en masse during the exceptionally busy winter period.

This week, however, is the last in which staff would have to have received their first jab to fit in two doses before the target date.

Responding to reports of the apparent U-turn in government policy, first revealed by the Telegraph, Patricia Marquis, the Royal College of Nursing’s director of England, described it as “long overdue . . . It was never in the interests of patient safety to threaten tens of thousands with dismissal in the middle of staffing crisis”.

Marquis added: “We will continue to support the government and employers to make the case for vaccination.”

Simon Clarke, chief secretary to the Treasury, told the BBC on Monday that the wider backdrop to the decision was that “philosophically we’ve always been trying to balance making the maximum interventions for public health against Covid with the minimum interventions that infringe people’s liberties . . . and that is a really hard thing to achieve”.

Every government around the world had wrestled with the same question, he suggested, adding: “The main message is vaccination really does work . . . and people should get vaccinated.”

The change of heart, which may be confirmed later today, is likely to anger the care home sector, where staff have had to be fully vaccinated since November, resulting in the loss of employees in an area that is already heavily understaffed.

Before the mandatory vaccination policy was imposed, the Department of Health and Social Care’s impact assessments had suggested 40,000 people could lose their jobs as a result.

Asked whether the rules would also be changed for care homes, Clarke said the broad logic remained “that if you are working with vulnerable people, with the oldest in society, then it is far preferable that you are vaccinated because of course you pose less of a risk to them and of course less of a risk to the resilience of the healthcare system of which you are a part”. None of that, he said, had changed.

He added: “But in terms of where Omicron has reduced the risk sufficiently to allow us to change policy that is a decision for the health secretary and his colleagues.”