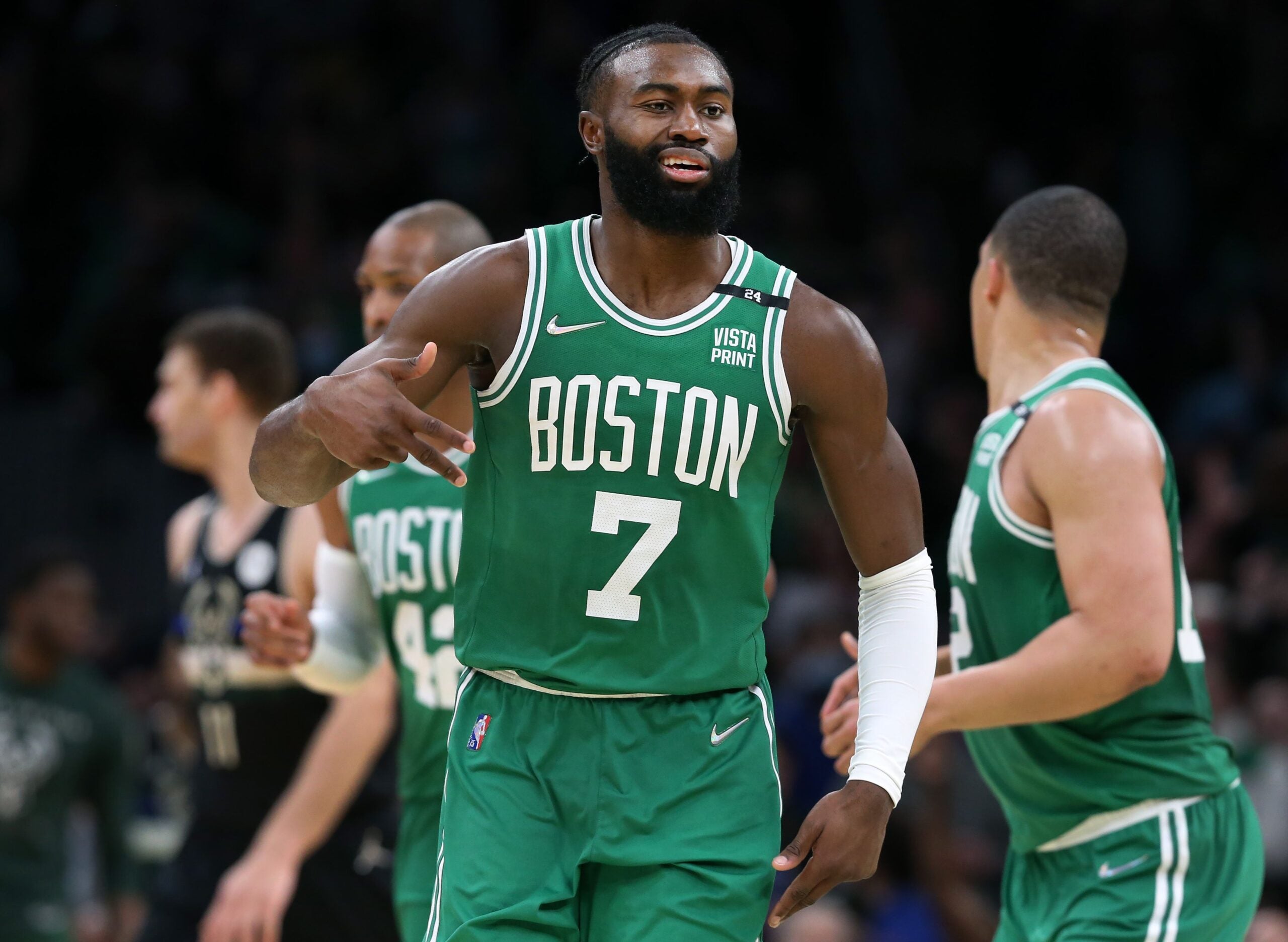 Jaylen Brown’s initial, or at least initially presumed reaction, to the reports that Boston offered him in a trade for Kevin Durant didn’t look well for the Celtics.

The star wing tweeted “Smh” in the hours following the report, starting speculation that Brown might want out of Boston and leave when his contract expires in 2024.

An executive from another team though doesn’t believe that’s the case. The executive told longtime Celtics insider Steve Bulpett that they believe Brown wants to be in Boston for the long-haul.

“I think Jaylen IS long term,” the executive told Heavy.com’s Bulpett. “If they want him long term and they’re going to pay him the contract he deserves, I think he’s all-in on Boston. From everything I’ve been told, Jaylen’s a loyal guy. I know frustration can happen when things aren’t going well, and I think we saw some of that earlier in this past season.

“But when you take a step back and look at things, I think he wants to be there. And any problems that could ever happen with that relationship would probably have to come from him getting the idea that they’re not in on him. And right now I don’t see that from the Celtics. I think they know what they have in Jaylen — now and for the future — and they want to keep that going.”

Another executive told Bulpett that they aren’t sure how real trade talks between the Celtics and Nets are, but that Boston will be involved in some way because of Brown’s stature.

“Jaylen Brown is the single best player we’ve heard tied to this thing, so Brooklyn has to keep that alive,” the executive told Bulpett. “I still don’t know how real that is, and, trust me, we’ve been trying to find out for our own sake.

“There may be nothing there at all, or maybe there’s something if Brooklyn gets back to reality with what they’re asking for. But unless they can find another deal for Durant or they work things out with him, a team like Boston is stuck in this — the rumors and the whispers around the league at least — because they’ve got really good players.”

The Celtics’ interest in Durant was first reported on July 25. Boston offered Brown plus guard Derrick White for Durant, but the Nets want guard Marcus Smart and another player plus first-round picks instead of White, The Athletic’s Shams Charania reported.

However, Boston and Brooklyn haven’t “any real traction” on a potential Kevin Durant deal, The Boston Globe’s Adam Himmelsbach reported Wednesday. Celtics president of basketball operations Brad Stevens and coach Ime Udoka have also been in constant communication with Brown, who understands the situation, Himmelsbach added.

Durant views the Celtics as a “desired” landing spot after he gave the Nets an ultimatum to either fire Sean Marks and Steve Nash or trade him, SNY’s Ian Begley reported Wednesday.

Publicly, the Celtics haven’t commented on the trade rumors. Jayson Tatum and Grant Williams are the only players who’ve spoken about the reports. Tatum was a bit deferential when first asked, but said he and Brown have “got more to do.” Willams is confident Brown will be in the right mindset entering the season and added that being the rumored centerpiece in a deal for Durant shows how “valuable” Brown is.

Brown will become eligible for an extension in October. However, insiders don’t expect Brown to sign an extension this offseason. Boston can only offer Brown a three-year, $111 million contract added onto the remaining two years of his current deal. If Brown is named to any of the All-NBA teams over the next two seasons, he can sign a five-year, $273 million contract with the Celtics when he becomes a free agent in 2024.

The Suns, Heat, and 76ers are the other teams Durant’s reportedly eyed as desired locations for a trade. The Raptors have reportedly shown interest in the two-time Finals MVP.