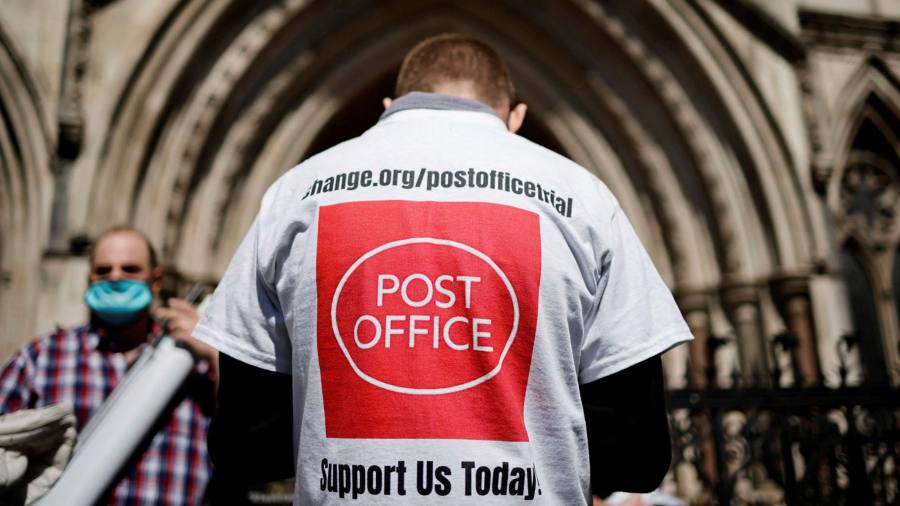 Ministers must urgently ensure that the postmasters who won their legal battle against the state-owned Post Office and exposed “the worst miscarriage of justice” in recent British history were fully compensated, a parliamentary committee has demanded.

MPs on the House of Commons business, energy and industrial strategy committee in a report published on Thursday said they were “deeply disappointed” that the 555 claimants, including some who were wrongly prosecuted for theft, were likely to be left worse off than other victims.

They won their case in December 2019, when the High Court ruled that it was bugs and defects in the Post Office’s IT system, Horizon, that had caused financial discrepancies in postmasters’ accounts and led to hundreds of them being wrongly prosecuted between 2000 and 2014.

The Post Office settled the case brought forward by 555 postmasters for £57.75mn but £46mn was immediately taken to cover their legal fees. That left them just £20,000 each in compensation, although their individual losses were estimated to be in excess of £100,000.

The government has made more than £1bn available to the Post Office to cover compensation payments but the report said it was unclear what the exact purpose of that money was and called on ministers to clarify whether any of those funds were available for the 555 original claimants.

The government and Post Office have said the £57.75mn was a “full and final settlement”. But the 555 postmasters have argued that they were forced to settle at the time as they had run out of funds to continue the case.

The report said “the injustice arising from this level of compensation was further compounded” by the government’s decision to exclude the claimants from a settlement scheme set up in 2020 to compensate those postmasters who had used their own money to cover the erroneous accounting shortfalls.

“It is clearly entirely unacceptable that the group of 555 victims who first brought this scandal successfully to court are being left in a worse position than those who are being compensated thanks to their action,” said Darren Jones, the Labour chair of the committee. “The chancellor must come forward with the required funding now.”

A public inquiry into the scandal, which opened this week, heard how the victims had their lives ruined in what amounted “the worst miscarriage of justice in recent British legal history”, according to Jason Beer QC, counsel to the inquiry.

Harjinder Butoy, 45, a postmaster who was sentenced to 39 months in jail after being convicted of 10 counts of theft in 2008, told the inquiry on Wednesday how he had struggled to find work since coming out of prison and is currently unemployed. His conviction was overturned last April.

Lisa Brennan, whose conviction was also overturned last year, had earlier told the inquiry how her life fell apart in 2002 when the Post Office prosecuted her over a £3,000 shortfall. She received a six-month suspended jail term.

She told the inquiry that after the court case her marriage had broken down, she was made bankrupt and had tried to take an overdose. She was left homeless and was forced to “couch surf” with her then six-year-old daughter. She went without food so her child could eat. “I felt broken by the allegations being made against me,” she said in her witness statement.

The report also recommended an independent body should be set up to support the 576 postmasters who have not yet started the process to have their convictions quashed.

An estimated 706 prosecutions may have been based on evidence from the faulty computer system, the Post Office has said. So far 72 postmasters have had their criminal convictions overturned, with other appeals pending.