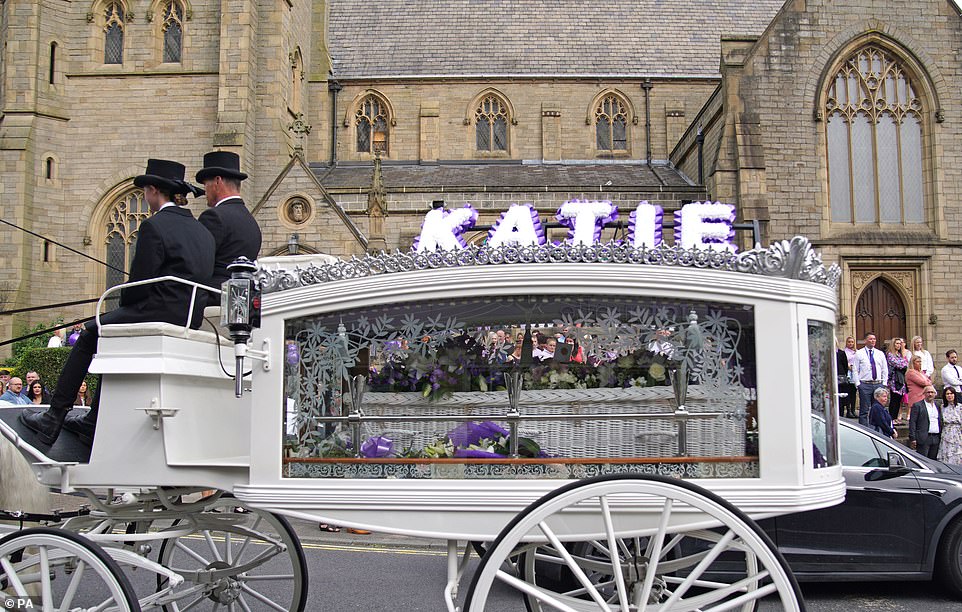 Balloons and a horse-drawn carriage for Katie Kenyon’s funeral: Mourners wear ‘murdered’ mother-of-two’s favourite colour purple as she is laid to rest in a white wicker coffin

By Mark Duell for MailOnline

Mourners wore purple to celebrate the life of mother-of-two Katie Kenyon at her funeral service this morning.

More than 200 people gathered in her home town of Padiham in Lancashire today to pay their respects to the 33-year-old whose body was found within the Forest of Bowland on April 29, one week after she went missing.

Her family asked those attending proceedings at St Leonard’s Church to wear her favourite colour or anything colourful. A carriage, drawn by two white horses adorned with purple plumes, led the cortege to the church.

On top of the carriage – which contained her white whicker coffin – were floral tributes to ‘Katie’ and ‘Mum’, and purple balloons were also attached outside the town centre church. A private burial service will follow.

Miss Kenyon was last seen at around 9.30am on April 22, when it is thought she travelled in a silver Ford Transit van which left Burnley towards the Bolton-by-Bowland area of Lancashire.

Police found a body on the evening of April 29 in an area of the Forest of Bowland after receiving new details about where Miss Kenyon could be. A post-mortem examination found that head injuries caused her death.

On April 29, Andrew Burfield, 50, from Burnley, appeared by video-link from HMP Preston for a brief court hearing charged with her murder. He spoke only to confirm his identity during the seven-minute hearing at Preston Crown Court. Burfield was remanded in custody and a trial date was set for November 14.

Katie Kenyon had last been seen alive getting into a silver Ford Transit van in Burnley, Lancashire, on Friday, April 22

Andrew Burfield, 50, of Burnley, was charged with Miss Kenyon’s murder and is due to go on trial in November