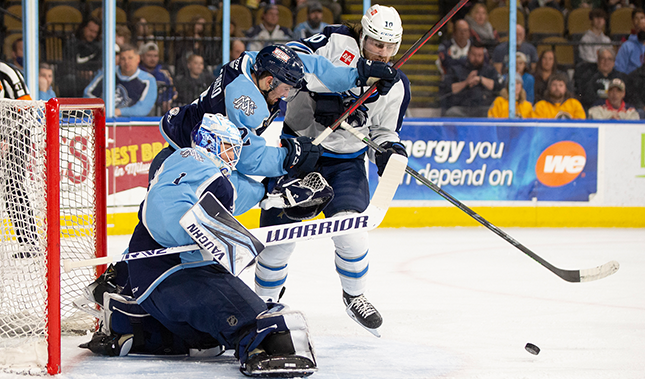 The Manitoba Moose are facing elimination from the American Hockey League playoffs after dropping a 2-1 decision in Milwaukee on Saturday.

The Admirals tallied the game-winning goal with just 46 second left to take a 2-0 series lead in the AHL central division semi-final.

Manitoba had scored less than a minute prior to knot the game at one goal apiece.

Morgan Barron scored for Manitoba, while Jimmy Huntington and Brayden Burke scored for the home team.

It took Manitoba almost ten minutes to collect their first shot on goaltender Devin Cooley. Cole Maier shuffled a backhand into the glove of Cooley from close range in the midst of a scoreless game.

Cooley made nine first-period saves compared to Berdin’s six at the other end of the ice.

The Moose turned up the heat in the second period but were unable to beat Cooley on 22 attempts. Manitoba failed to capitalize on either of its two second period powerplays.

The Admirals managed just three shots on net during the middle frame. Milwaukee finally broke the deadlock early on in the final stanza, with Jimmy Huntington beating Berdin on a defection right in front of the crease.

Morgan Barron sniped the game’s tying goal with just 1:30 on the clock.

The momentum was short lived though, as Brayden Burke took advantage of an Austin Poganski giveaway, sealing the game for Milwaukee.

The Moose head back home for game three on Wednesday facing elimination.