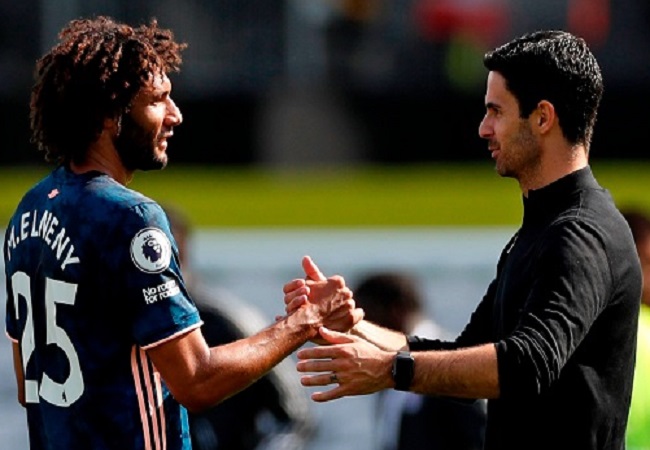 Arsenal manager Mikel Arteta admits to have prevented Mohamed Elneny from leaving the club in January saying he knew the Egyptian midfielder would be needed during the final months of the season.

Elneny was handed his first start since December when Arsenal faced Chelsea at Stamford Bridge on Wednesday. And as he so often does, he ended the evening earning praise from the boss and supporters for an assured performance.

Quick to put any rustiness to one side, the Egypt international went toe-to-toe with N’Golo Kante in the centre of the park to justify his selection ahead of Sambi Lokonga. The 29-year-old will now be hoping he retains his place for Premier League clash with Manchester United on Saturday.

“I always said that for me, he’s one of the most important members of the squad.” Arteta said when asked about his faith in Elneny.

“For what he does when you give him the chance to play and for the things when he doesn’t play.

“It’s a phenomenal person. And then you have to judge the footballer as someone who probably doesn’t get the credit that he deserves.” Continued Arteta.

After six-and-a-half years at the club, Elneny looks destined to leave the club in the summer when his current deal ends.

Since impressing on loan for Besiktas a couple of years back, he’s been regularly linked with return to Turkey. And he is certain to have no shortage of suitors come July. Many showed interest at the turn of the year while he was at the African Cup of Nations.

“It was more in January than in the summer. And I think he understood that with the squad we had I could not let another player leave.” Arteta revealed about the decision to block the move of the Egyptian.

“It’s a tough balance because, in the end, they are in a period of their career where they are looking to extend their football lives. But at the same time, I thought he could be important for the team in the last part of the season.”

“We’re going to have a conversation at the end of the season.”

“I’m really happy with him, that’s all I can say.” Arteta added.