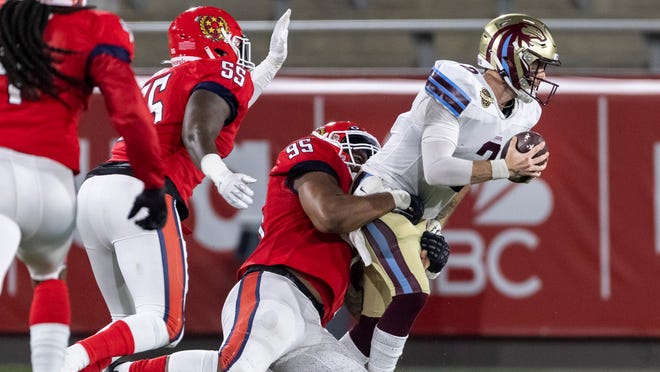 It has been just two games for the Michigan Panthers, but a few trends seem to be emerging.

The Panthers are allergic to the first half — and they appear to insist on taking thethe game down to the final play.

For the second consecutive week, quarterback Shea Patterson threw a pass to the end zone while down by one score as time expired, and just like last week, it fell incomplete to give the New Jersey Generals a 10-6 victory in Birmingham, Alabama.

Prior to the Panthers’ final drive, their offense was anemic, gaining just 54 yards in the first half.

“Offensively, we have an extra day this week, and we need it to figure out who we are and what we do best.”

Patterson, the former University of Michigan QB, struggled all night until the final drive, when the Generals stared rushing just three linemen and the Panthers (0-2) drove 64 yards before coming up short.

IT’S EARLY:Will Michigan Panthers and USFL be successful? Who knows? Will it be fun? You bet

After giving up a field goal on the Generals’ second possession of the game — Michigan’s defense made a good stand, forcing the kick after New Jersey had a first-and-goal from the 8 — the Panthers got the ball back and moved the sticks for the first time, but were soon forced to punt.

But much like Week 1, the defense kept the Panthers in the game.

It started with Orion Stewart, a Baylor alumnus with 12 interceptions in college, who picked off the pass from New Jersey (and former Detroit Lions) quarterback Luis Perez and took it back to the Generals’ 20.

The Panthers needed just three plays from there, with running back Reggie Corbin rushing twice to get down to the 4 before former Stanford back Cameron Scarlett ran into the end zone untouched.

But Michael Carrizosa missed the extra point, leaving the Panthers’ lead at 6-3.

The Generals responded late in the second half, orchestrating the best drive of the day.

New Jersey, which used two quarterbacks throughout, used a balanced attack (five rushes, six passes) to drive 67 yards, punctuated with a Darius Victor 2-yard touchdown rush to take a 10-6 lead into the break.

Again, just as in Week 1, halftime seemed to help the Panthers.

Fisher’s team engineered its best drive of the game to start the third quarter, getting four first downs (one more than their first-half total) to get deep into New Jersey territory.

But Patterson couldn’t connect on a third-and-6 pass from the 20, setting up a 37-yard field goal for Carrizosa. It wasn’t close, missing to the left by at least 15 yards.

After the teams exchanged  three-and-outs, the Generals went on the move again. Their drive started with a 26-yard strike from De’Andre Johnson to former Packers wide receiver Darrius Shepherd to get into Panthers territory.

The Generals reached the Panthers’ 13 before Michigan safety Sean Williams, a former captain at Navy, broke up a would-be touchdown on third down in the end zone, forcing a 33-yard field goal attempt.

This time, it was the Generals missing to the right.

The Panthers went three-and-out and punted to the Generals 40, setting up another big play from Williams. On the first rushing attempt of the drive, Williams came downhill, put his pads on the ball and forced a fumble from Victor, which the Panthers recovered.

“He’s a good football player,” Fisher said of Williams. “In addition to having ball skills, he can tackle.

“I’m proud of the whole defense.”

But again, the Panthers couldn’t take advantage. Instead, they went backwards on three plays before punting.

“When you go through the exercise we’ve gone through the last four or five weeks, offense will be a little bit behind,” Fisher said. “It’s easier to get defense going, install systems and pressures.

“We’ve got people in the right place, we just got to settle down a bit at the quarterback spot.”

In the first game, Fisher played both Patterson and former Denver Broncos quarterback Paxton Lynch, but Lynch did not see action on Friday. Fisher did not say whether that would change in Week 3.

On Michigan’s next drive, taking over on their own 12 with just more than four minutes left, the Panthers managed only one first down before punting.

After forcing one last three-and-out, the Panthers began on their own 20 with no timeouts.

That led to a fourth-and-20 from their own 10, on which Patterson completed his deepest pass so far, picking up 22 yards. On the next play, Patterson succeeded again, completing a 32-yard strike to Scarlett to get to the New Jersey 41.

After a seven-yard pass to Lance Lenoir Jr., Patterson found Devin Ross for a gain of 18, setting up one final play from the Generals’ 16 yard line.

Patterson rolled right and threw for Lenoir in the end zone. But he couldn’t connect as the ball fell to the ground, and the Panthers dropped another game on the final play.

“We had a shot at the end zone to win, I’d much prefer to be running the ball and run the clock down,” Fisher said. “At this point, we have a pretty good idea of who can do what, we just need to get the ball in their hands.”