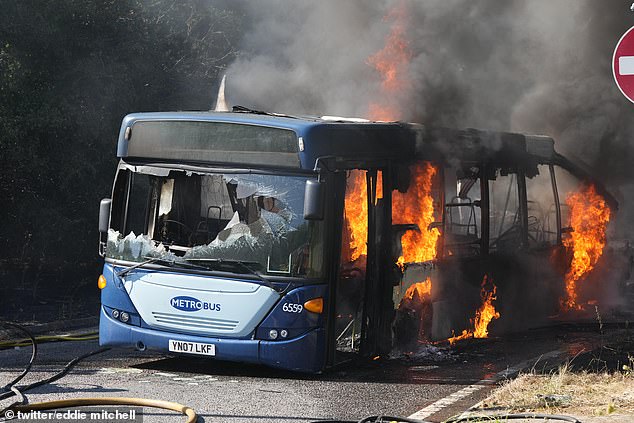 By Eleanor Dye For Mailonline

Firefighters rescued up to 20 people when a Metrobus caught fire after a crash with an ‘undertaking car’ in West Sussex this afternoon.

The incident on the A24 Southbound slip road in Ashington was reported at 4.20pm.

The bus blaze was captured in a shocking video posted on Twitter as the fire service worked to extinguish the huge flames tearing through the vehicle.

A firefighter can then be seen putting out the last of the flames.

A Metrobus burst into flames after a crash with an ‘undertaking car’ on the A24 in Ashington, West Sussex

Only the shell of the bus remains, as it appears completely gutted with the windows and doors smashed in.

It is believed that there were only a few injuries.

It is believed there are only a few injuries

The incident was reported at 4.20pm

Eddie Mitchell, who posted the video on Twitter, said: ‘Amazing swift work by our great emergency services, all persons safe !!!!!’

The road was closed after the blaze

Eddie Mitchell, who posted the video on Twitter, said: ‘Amazing swift work by our great emergency services, all persons safe !!!!!’

The road remains closed as of 5pm, according to Inrix traffic monitoring service.

It said: ‘A24 Southbound exit slip road closed due to coach fire at B2133. Note change of location.’