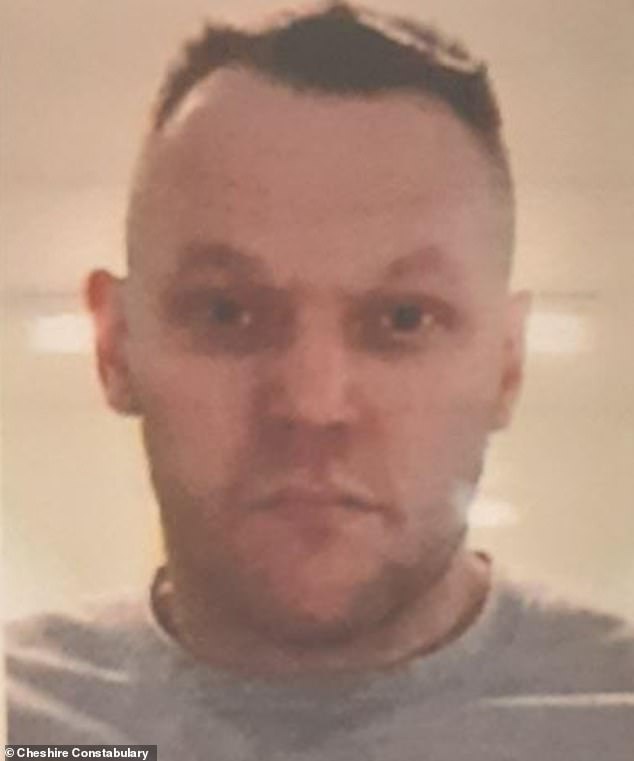 Manhunt as convicted killer escapes custody for SECOND time: Police warn public not to approach violent thug, 39, on the run again four years after giving hospital guards the slip in 2018

By Jack Wright For Mailonline

Police have launched a manhunt to find a convicted killer who has escaped from jail for the second time in four years.

Cheshire Police have launched a manhunt and are warning the public not to approach him. They have also urged anyone with information as to his whereabouts to get in touch with them.

Farrington, 39, was last seen at HMP Thorn Cross in Warrington at around 6.45pm last night

Farrington was convicted of attacking and killing a prison in his cell at HMP Peterborough in September 2008.

He broke out of prison in 2018, when he gave officers the slip while being treated for a head injury at a Norfolk hospital.

On that occasion, Farrington ran through car parks, a farmer’s field and Norwich City’s training ground before he was caught by police around two hours later.

Farrington was last seen wearing a dark top with white writing on the front, blue jeans, black shoes and a dark coat. He was also carrying a dark rucksack, according to police. He is known to have links within the Peterborough area.

Cheshire Police have launched a manhunt and are warning the public not to approach him. They have also urged anyone with information as to his whereabouts to get in touch with them

Superintendent Mike Evans said: ‘We currently have numerous officers carrying out a variety of searches to locate Farrington.

‘While our enquiries are ongoing we’re urging anyone who sees Farrington to not approach him but to instead call Cheshire Constabulary immediately on 999 quoting IML 1230000.

‘Officers will be maintaining a presence around the prison and in the local area to provide reassurance to the community. If you have any concerns please do speak to one of them.’

Information can also be passed on anonymously by calling Crimestoppers on 0800 555 111.