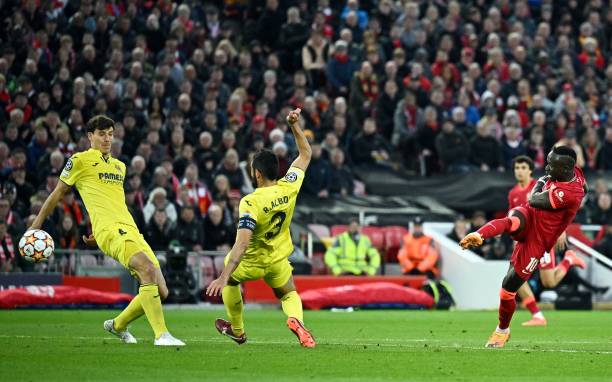 Senegal striker Sadio Mane scored for Liverpool in their comfortable 2-0 win over Villarreal in the UEFA Champions League semifinal first-leg on Wednesday evening.

Mane scored the second goal after Estupiñán’s own goal inside two second half minutes had given Liverpool a dream start to the second half of the UEFA Champions League semifinal first-leg.

Liverpool bossed possession, fired shots and made crosses but somehow the Spanish side, which put many yellow shirts behind the ball, survived the onslaughts.

Thiango Alcantara thought he had broken the deadlock but his rasping curling effort from range grazed the frame and bounced out of play.

Both teams went to break with the scores goalless but there was no doubt as to who had an upper hand in terms on possession.

Liverpool finally got the reward for their persistence as Estupiñán scored past his own goalkeeper Rulli in the 53rd minute.

Offside flag denied Liverpool what could have been a third goal after right-back Robertson connected into the net a ball from left-back Alexander-Arnold in the 64th minute.