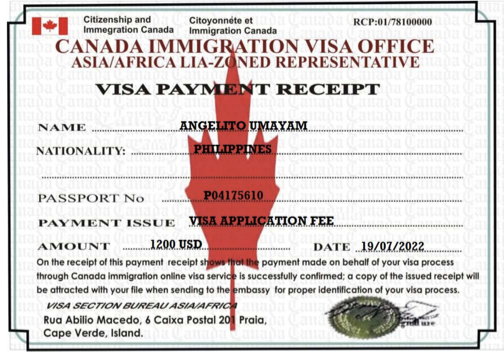 Many use immigration agencies and lawyers to help with the copious amounts of paperwork involved, and a Toronto woman is raising a red flag about a fraudulent agent who is allegedly running a bold scam on Facebook, defrauding people in vulnerable situations who are looking for a better life in Canada.

The man claims to be Immigration Minister Sean Fraser, with a Facebook profile displaying the minister’s name and image.

Valentina Dritton tells CityNews a friend showed her the profile and after consulting with family, she felt it was legitimate.

“I Googled who Sean Fraser is and … I was like ‘whoa, jackpot!’ Who wouldn’t want to apply with him?”

She reached out to the man as she has a nephew in the Philippines who is in dire straits and desperate to come to Canada.

“[My nephew has] a brother who is sick, the father doesn’t work anymore and basically him and his sister are the only ones supporting them and he’s got his own family, his wife has cancer,” Dritton tells CityNews. “I sent a message to this Sean Fraser about my nephew … and he promised that he’s going to bring him here for $1,200 USD.”

She connected her nephew with the man and they began the apparent process of getting a work permit and other necessary immigration documents.

Dritton’s nephew works in construction and she says he does not make a lot of money — $1,200 USD is over 67,000 Philippine peso and her nephew borrowed money as well as used his entire life savings to come up with the amount. When he sent the money to who he believed was Fraser, he was issued a receipt which resembles a certificate with a maple leaf in the background, his name, and the amount paid.

However, Dritton noticed in screen shots her nephew sent her that the name on the bank account the transfer was sent to was an unknown third party. In addition, during the course of their conversations, the phone number the scammer was using changed from a local Toronto number to a Dallas area code.

Dritton says she began getting suspicious and demanded a video call to verify the person’s identity.

“I said ‘as a client I demand your face. I have the right to see your face. Show me your face.’ And he made up excuses – ‘oh I’m with my kids, my kid is sick, I’ll call you later,” says Dritton. “So I kept asking him ‘can we just video chat for 10 seconds? Show me your face … make sure that you’re real.”

When he finally answered her call and turned on his camera, Dritton says the video chat was farcical at best.

“He turned on his camera and then his camera is focused on the TV that has the real Sean Fraser’s interview on TV,” she says. “After a few seconds he turned it off and goes ‘did you see me?’ I said ‘no I didn’t see you, that’s a clip from the internet. That’s Sean Fraser.’ And he goes ‘I am Sean Fraser.’”

At that point Dritton says she had had enough and confronted him.

“I said ‘you know what? You are not Sean Fraser, your accent is not even close to Sean Fraser and your number is a Dallas number,’” she says. “You’re a fake, you’re a scumbag.”

CityNews reached out to Immigration, Refugees and Citizenship Canada (IRCC) to inquire about this fraud involving the potential theft of the identity of a federal minister.

In a statement they say:

“We are committed to upholding the integrity of all our immigration programs and protecting our systems against fraud and misrepresentation. Immigration, Refugees and Citizenship Canada urges clients to use the official Departmental website to obtain information about its programs in order to avoid becoming victims of fraud.”

They add that the IRCC believes the best way to protect people from fraud is to inform and educate the public about scams.

“Applicants can visit our “Protect yourself from immigration fraud” web page, to find out about common types of scams and fraudulent activities, and how to report fraud,” they say.

Dritton feels more needs to be done to protect people who unwittingly fall victim to such scams due to their difficult circumstances.

Meanwhile, the fraudster demanded another $1,000 from her nephew to secure a Labour Market Impact Assessment (LMIA) which is a legitimate document that a Canadian employer may need to get before hiring a foreign worker. As per the IRCC website, “a positive LMIA will show that there is a need for a foreign worker to fill the job.”

Dritton has advised her nephew not to send the man any more money, but the damage has already been done. She says that the scammer has now taken down the fake Facebook page and disappeared with the money they already sent.

“They’re already poor. He’s making them more poor. It’s just sickening,” she says, adding that she is now helping her nephew pay back what he borrowed to pay who he believed to be the citizenship minister of Canada.

CityNews tried to contact the scammer, but he did not answer our calls. Dritton has filed a report with Toronto Police who say they’re investigating.

She says she hopes her mistakes are a cautionary tale for others in a similar situation and advises that research and asking questions is a must.

“Dig more … don’t just listen to anyone. I did [the immigration process] myself. I’m here, I should know better. But I fell into it too.”