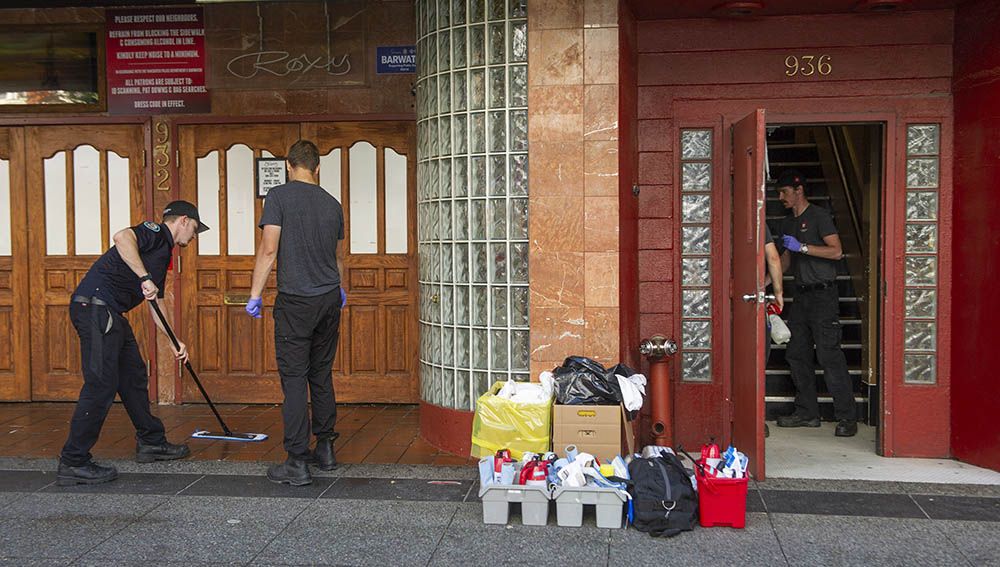 A man has been charged after a weekend machete attack inside a Granville Street rooming house that left four people seriously injured.

Ibrahim Abdela Bakhit, 48, has been charged with one count of aggravated assault, assault with a weapon, and possession of a weapon for a dangerous purpose, said Vancouver police. He remains in custody until his next court date on Aug. 22.

Bakhit allegedly used a machete to attack four people inside a rooming house in the 900-block Granville Street in the heart of the entertainment district at around 10 p.m. Saturday.

Before that, he allegedly set his suite in the rooming house on fire.

When Vancouver police officers arrived, the suspect was still armed with the weapon, said police spokeswoman Const. Tania Visintin on Sunday. Police fired and the suspect was injured.

He sustained serious, non-life-threatening injuries and was taken to hospital.

A day after the attack, Vancouver Mayor Kennedy Stewart called for reform of the justice system, saying the city has been “bearing the brunt — and resulting tragedies — of an under-resourced mental health and justice system that endangers the safety of the community, first responders and law enforcement.”

Stewart also called for a response to the “dire need” for more mental health services.

Stewart’s statement didn’t go over well with one of his mayoral challengers in the fall election. On Twitter, ABC Vancouver candidate Ken Sim called it “frustrating and disingenuous.”

“Since your first day as mayor, you’ve created a culture of hostility towards the police, whose board of directors you chair,” wrote Sim. “You tried to cut police funding only to have it be restored by (Public Safety) Minister Mike Farnworth.

“And now, when we should be working with the provincial and federal governments to secure funding for mental health services, you instead try to pass the buck and blame them for the problems we see today.”

Current Vancouver Coun. Sarah Kirby-Yung, who is running for re-election on the ABC slate, concurred. “Leadership is about doing what you can do and working collaboratively with others,” said Kirby-Yung. “Not recasting the truth and passing the buck. These are tough issues that require recognition, honesty and commitment.”

Stewart didn’t actually try to cut the police budget. In late 2020, in the depths of the pandemic, he tried to reduce a proposed budget increase, but that decrease was appealed by the police board and the province restored $5.7 million in funding earlier this year.

— With a file from Joseph Ruttle