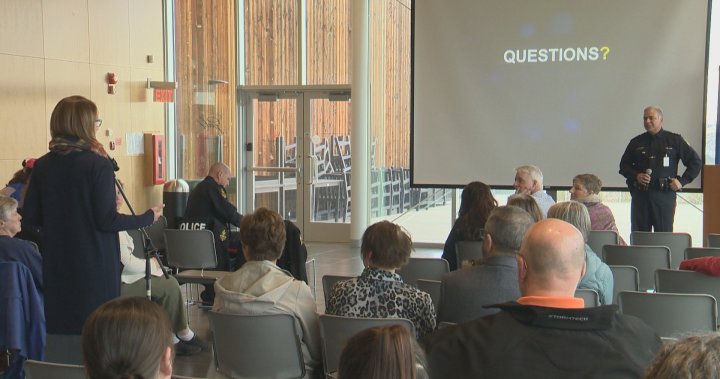 LPC chair Rob Van Spronsen was asked how commission members are selected and if more diversity will be included in the future.

“Our job will be advocacy, because it is the City of Lethbridge that appoints members to the commission,” Van Spronsen said.

“So what I hear tonight is we have to advocate to the city to make some changes, and I do know the city is looking at it.”

The LPC is also asking for public input on its four proposed strategic priorities, part of the police department’s upcoming strategic plan.

The priorities are governance, organizational excellence, partnerships and engagement.

The commission is asking three questions, which can be viewed on its website.

“Are there any gaps? These are our thinking in terms of strategic priorities. Did we miss anything?” Van Spronsen said. “We want to get that feedback and I think secondly, we would like to know from the community what do they see as the No. 1 priority.”

The town hall also involved a presentation from police chief Shahin Mehdizadeh, speaking on the city’s recent crime statistics. One area noted by the chief was the downtown, which was the only part of the city to see an uptick in calls for service last year compared to 2020.

“It’s about what we do on enforcement action, which may mean more visibility or projects that we can do,” Mehdizadeh said.

The chief said he plans on holding more in-person meetings with residents in the future.

“We are looking at every which way to connect with our citizens right now for our strategic planning,” Mehdizadeh said.

“Moving forward, I really want to do more of these in different venues in different parts of the city to bring more localized discussions.”

The LPS will also be collecting feedback through a phone survey in May.