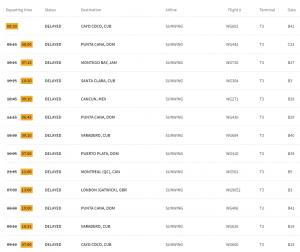 Sunwing passengers continue to face long lines and delays at Pearson Airport as the airline continues to be impacted by a network-wide system glitch.

At least 15 flights out of Toronto are delayed on Wednesday and another 13 flights set to arrive at the airport have also been pushed back.

Dozens of flights from Toronto to vacation destinations have been rescheduled since Sunday due to the computer issue affecting flight check-in and boarding. Some passengers were starting to be invited to check in with the airline late Tuesday morning as they worked to resolve the growing delays.

“Our third-party systems provider, Airline Choice, continues to work on resolving their system issue which was prompted by a compromise in their network,” said the airline in a statement provided to CityNews.

“Sunwing continues to manually process as many flights as possible to minimize service disruptions. We are also actively working with other air carriers to source additional aircraft to help relieve the backlog in certain destinations.”

The airline confirmed in a tweet that 21 planes were able to depart on Tuesday with another 13 planned for departure in the evening.

“Our team has been working day and night to find alternate ways to get customers to their destination or on return flights home.”

Sunwing is encouraging all customers with departing flights to check their flight status before heading to the airport.

There is still no timeline for a return to normal service.

The airline tweeted on Tuesday that any passengers with delays over three hours will be compensated and says impacted customers can choose to change their departure date with no fees up until June 23, 2022. Customers can initiate their compensation claim by visiting the Sunwing website.

Applies to Sunwing bookings with scheduled departure dates between April 19, 2022 and April 22, 2022. Valid for travel up to June 23, 2022. System rates apply for new travel dates.

Passengers up in arms over delays, lack of communication

One passenger tells CityNews she was supposed to fly to Cuba on Monday morning but the flight kept getting pushed back. She was back at the airport early on Tuesday and was told by the airline that the flight will depart at some point during the day.

The biggest complaint from many travellers has been communication from the airline. Many say they are learning about network problems through social media posts from other travellers.

Navin Monteiro was attempting to fly to Cuba with his wife on Sunday and ended up spending an evening in a hotel near the airport after their flight was pushed back numerous times.

Monteiro says they were notified that their afternoon flight had been delayed 20 minutes prior to boarding. It was subsequently delayed again in the evening and rescheduled several times on Monday with little information from the airline about what the issue was.

The network issues are also impacting flights back to Canada with one traveller tweeting “stranded in Punta Cana for a second day, our flight has been delayed for a second time.”