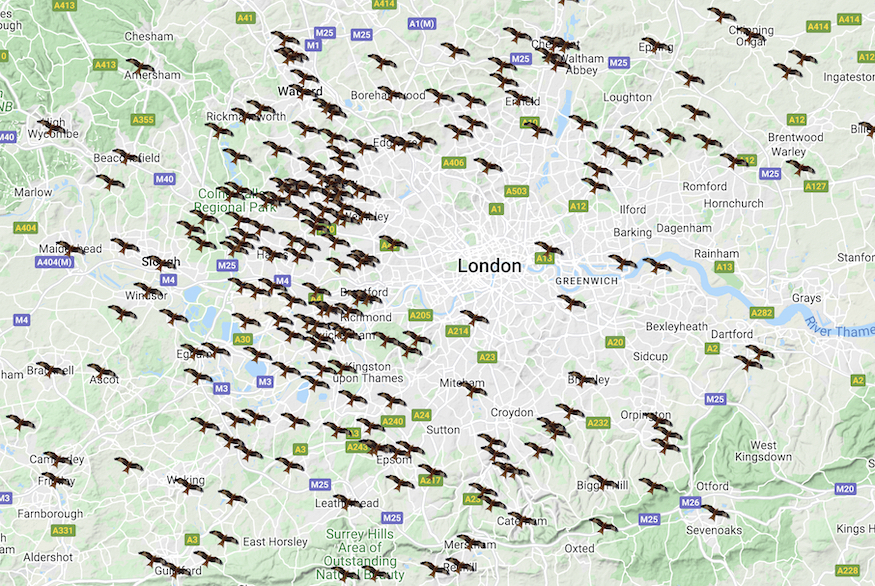 These magnificent birds of prey were once extinct in the UK, but are now a common sight in some parts of the capital. Help us map them.

Have you ever seen a red kite in London? The answer depends heavily on where you live. Those to the northern or western fringes might see them every day. Londoners away from these areas might be totally unaware of their existence.

We want to know where you’ve seen them in London and the surrounding area. And we’ve made a map based on over 260 reader sightings so far. Click on the bird icons below to find the location (and sometimes an anecdote from a reader).

As you can see, the birds are reasonably widespread around the south east. The deepest clusters are to the west, closer to the Chilterns where they were originally reintroduced. Sightings in inner London are rare, however. Clapham Common, Stepney and Greenwich are as central as we’ve heard so far.

Some areas got more reports than others. From Reading to Yeading, the M4 corridor is particularly replete, ditto the M40. These major roads connect London to the Chilterns, and it’s likely the birds gradually moved east from the hills, following the roadkill. Elsewhere, Caterham, Ware and Harlow get frequent mentions.

Red kites can be found further afield, with populations all over the country. We asked readers only for sightings in the south east, and that’s what we’ve mapped.

Back from the brink

The distinctive birds all-but-died-out in the UK in Victorian times, thanks to habitat loss, hunting and improvements in waste disposal (they are scavengers), though a few pairs clung on in Wales. Breeding pairs were reintroduced to the Chilterns in 1990s, and they’ve made a steady recovery ever since. Now, their numbers are so great that they’re a daily sight for many Londoners.

How to spot a red kite

Red kites are very easy to recognise. They’re pretty much the largest bird in the London sky, and glide around without much flapping, as birds of prey generally do. They have distinctive fan-shaped tails that, in adults, end in two points. Their feather patterns are also easy to distinguish, with ruddy, white and black feathers. They often hang out in pairs and occasionally larger groups.

See also: our map of parakeet sightings in the London and south east.