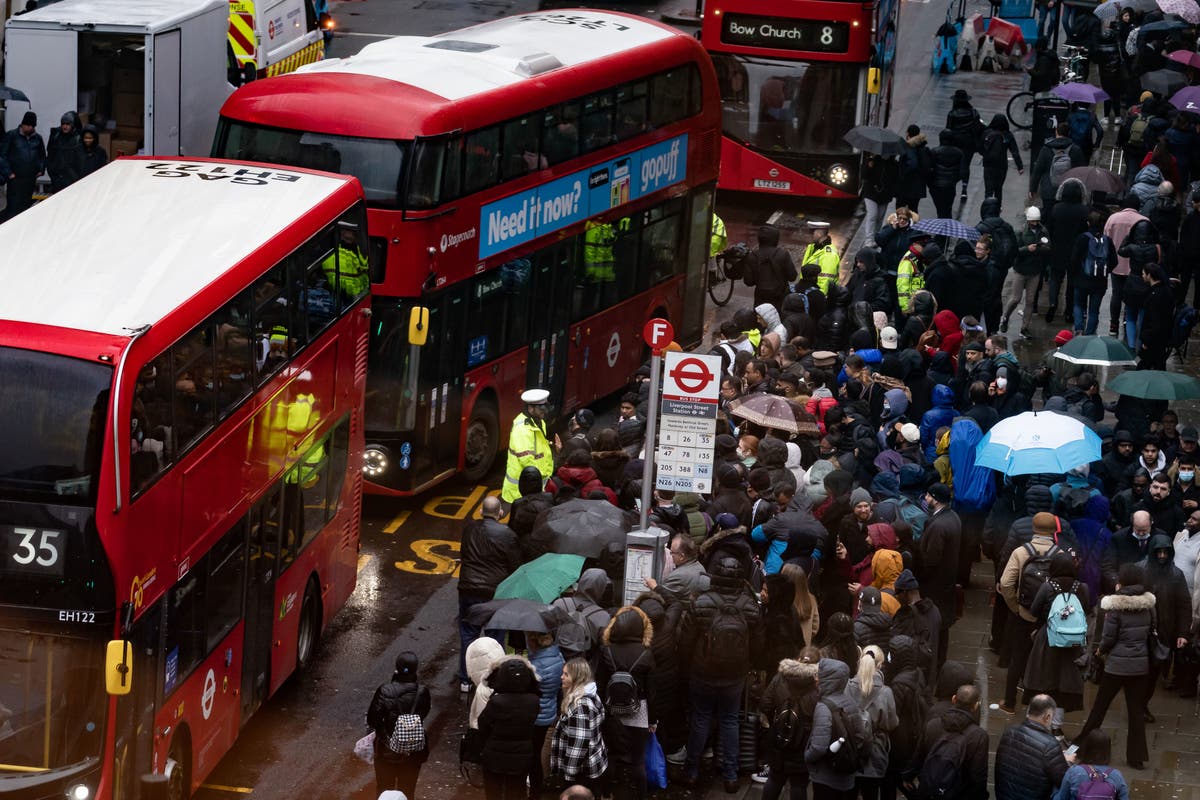 ondon commuters were on Wednesday facing another day of chaos as disruption continued across the Tube network after Tuesday’s strike.

Just after 6am the entire network was suspended with only the London Overground operating a reduced service. The DLR was part suspended between Shadwell and Bank while the network recovers from strike action. Lewisham services are terminating at Shadwell.

TfL said normal services should be operating by mid-morning. Until then, services are expected to be “severely disrupted” – meaning fewer services and packed trains.

Londoners expressed their frustration on social media as they turned up to Tube stations to find the gates locked for the second day running.

One commuter arriving at Archway station posted a picture of the locked gates at 6.10am, adding in a sarcastic note: “ I’m so glad the tube strike is over and my commute was unaffected.

“Thanks #TFL you are really supporting hard working Londoners.”

TfL said the Victoria line was running a good service but commuters at Seven Sisters reported that station being closed at 6.30am.

Others in Hillingdon, which lies on both the Piccadilly and Metropolitan lines, claimed that trains were running through whilst people were locked out of the station.

TfL warned passengers not to expect the Tube to start running widely until 730am – and take until mid-morning before services got back to normal.

By 7am, TfL’s journey planner was advertising a “good service” on the Victoria line.

Passengers were advised to delay their journeys until later in the day. The disruption was caused by a number of factors, including the placement of trains and the number of staff available in the morning – with some on overlapping night shifts not having been able to start overnight.

A near total shutdown is expected again on Thursday, the second day of the RMT’s two days of action over threats to pensions and the axing of up to 600 station staff posts to save TfL cash.

On Tuesday, TfL was able to run shuttle services at the end of some lines where the stations are above ground – on the Bakerloo, Northern, Central, Piccadilly and District lines.

However there were no trains on the Victoria, Metropolitan, Jubilee, Circle or Hammersmith and City lines in what was the worst strike since January 2017 in terms of its impact on the Underground network.

Mayor Sadiq Khan denied he was to blame and turned his fire on the RMT.

Thousands of early morning commuters were caught unaware by the RMT walk-out on Tuesday and were forced to cram onto buses as advice to work from home went unheeded.

A miserable morning, with roads heavily congested, was made worse by a near five per cent rise in Transport for London fares and a 3.8 per cent hike in national rail fares.

A Tube boss described the union as “turkeys voting for Christmas” and said RMT’s decision to call 10,000 members out on strike would worsen TfL’s already dire finances.

Many passengers vented frustration that their commute had been hampered just as they began returning to the office following the pandemic.