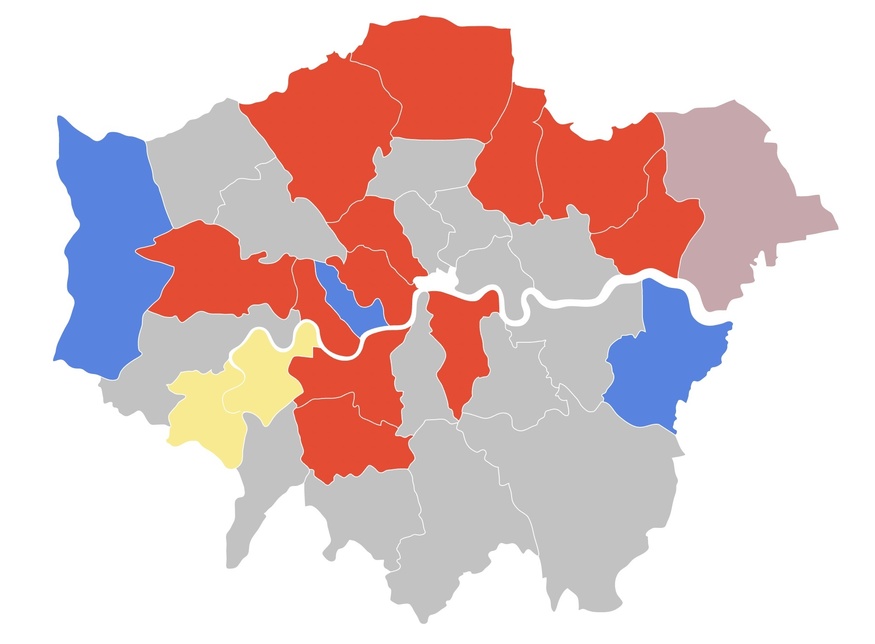 London local election results as they come in today (Friday 6 May).

Good morning! The votes are are still being tallied for many of London’s boroughs — which all took part in yesterday’s local elections. Already though, there have been a couple of bombshells:

NEW: A truly remarkable result in Westminster as Labour win the council for the first time in history since it’s creation.

Westminster City Council was created in 1964, and has been run by the Conservatives ever since — that is, until this morning. Labour has gained 13 seats from the Conservatives, giving them an overall majority.

Labour MP Diane Abbot, who was a Labour councillor in the borough over 30 years ago, says she “Could not have dreamt then that Labour could win that council.”

Mayor of London, Sadiq Khan — who is of course Labour — hailed the victory as a “truly remarkable result”.

Labour leader Keir Starmer, who’s made an appearance in Barnet this morning (more of that borough below), has said the party’s Westminster victory is “an astonishing result”.

The loss of Wandsworth will be felt most keenly by Conservatives

The Tories’ London ‘jewel in the crown’, Wandsworth has voted in their favour since 1978. It probably helped that under the Conservatives, Wandsworth residents pay the lowest council tax in the country. But that wasn’t enough to stave off support for Labour this time, who scooped a historic victory in the south London borough.

There’s a lot of talk about how ‘Partygate’ has lost Tory votes up and down the country (no doubt true), but other issues are at play; a Guardian article yesterday focussed on the rising use of foodbanks in the area; indeed one in Earlsfield is considering expanding due to demand.

By the by, a number of publications are saying that Wandsworth was Margaret Thatcher’s favourite council.

Up t’north (London) in Barnet, another result has left the Conservatives reeling — with Labour taking the borough from them. Barnet has had a Tory majority since 1964 in all but two years. Barnet Conservative leader Daniel Thomas has played down the loss, saying: “I think this is a warning shot from Conservative supporters and I think our loss today is not only due to the fact that I have just mentioned but also a fair number of Conservative voters who just didn’t go out to vote, stayed at home.”

Keir Starmer obviously doesn’t think the win is quite so insignificant — he’s chosen to show face at Barnet today, and hail the party’s London gains.

And in other news…