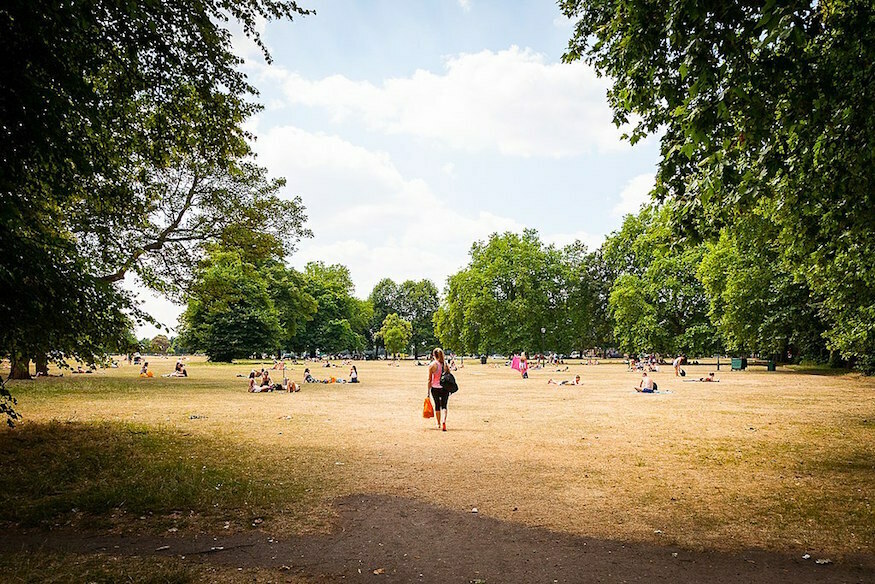 As of Friday 12 August, London is among the parts of the UK now officially living under drought conditions. It comes after the whole country was put under ‘prolonged dry weather’ status a couple of weeks ago. Here’s what the drought means for London.

Note: the below was written on Friday 12 August 2022 and was correct at the time, but the situation is changing quickly.

What does the declaration of a drought mean?

It’s the Environment Agency which decides whether to declare a drought, advised by The National Drought Group, which includes representatives from water companies, Defra, and other groups. Unlike, say, the declaration of a white Christmas, which just requires a single snowflake to fall anywhere in the UK, there’s no specific marker or measure of a drought — it’s simply declared when the experts deem the water supply status to be serious enough to warrant it.

Is there a hosepipe ban in London?

At time of writing, London isn’t under a hosepipe ban. However, Thames Water has said that it will be introducing one “in the coming weeks”. Exact dates and details haven’t been announced yet, but keep an eye on the Thames Water website.

Outside of London, the following areas and water companies are already under a hosepipe ban:

What does a hosepipe ban mean?

Officially known as a “temporary use ban”, a hosepipe ban is fairly self explanatory — you’re not permitted to use a hosepipe or sprinkler for activities such as watering plants, filling paddling pools or washing cars, and could be fined for doing so.

There are exceptions, though these mainly apply to farmers and other industries whose livelihoods rely on the use of hosepipes and sprinklers to survive, and specific exemptions vary between water companies. But for the average Londoner, it’ll be a blanket ban, with Thames Water promising to supply further information soon.

Does Thames Water cover all of London?

Thames Water is thought to supply around 15 million customers, from Gloucestershire in the west through to Essex and Kent in the east, including large swathes of Greater London. This map shows the Thames Water area.  Affinity Water, Essex and Suffolk Water, and Sutton and East Surrey Water, supply the parts of London which don’t fall under Thames Water. All of these areas are now under drought conditions.

Thames Water is one of the companies which has come under scrutiny for wasting millions of litres of water per day through leaks.

Where are London’s reservoirs?

London’s predominant water supply comes from The Lee Valley Reservoir Chain, consisting of 13 reservoirs in the north-east of the capital (grouped together as the Chingford Reservoirs and Enfield Reservoirs). Together, these bodies supply much of London’s drinking water.

Does London have a water desalination plant?

Well, this is awkward. Yes, yes it does, out in Beckton. In fact, we took a (metaphorical) deep dive into it back in 2015, looking at how it works and who it would help. It uses a lot of energy to make make sea water drinkable, so is only brought into use when London’s water situation is looking perilous (as well as for testing a couple of months each year).

The bad news? It’s not currently in use. Despite London, and the much of the rest of the country living through a drought and teetering on the edge of water usage restrictions, the Beckton desalination plan isn’t currently in use, and there are no plans for it to be put to use in the immediate future. Thames Water claims this is due to essential maintenance work currently being carried out. Not ideal.

When will it next rain in London?

As is the way with these things, weather forecasts are fluctuating at the moment. However, most forecasts are in agreement as of Friday lunchtime that the capital should get a small amount of rain in the evening of Monday 15 August, followed by significant thundery showers for a large part of Tuesday 16 August, and possible further light showers into Wednesday.

Even when it does rain, that won’t be the end of drought status, hosepipe bans and other restrictions. This drought is the result of months and months of drier-than-average weather (England had its driest July since 1935), and the odd rain shower won’t undo that.

In fact, there’s a chance that our current weather may go on to affect crop production next year. While farmers are already struggling to keep crops, vegetables and other food sources going for this year, we’re approaching the time when they’d be planting (or ‘drilling’) next year’s crops — and with the ground this dry, that’s looking like it might not be possible.

Is flash flooding likely in London?

Odd though it may seem, flash flooding is more likely following a prolonged dry period. Sudden heavy downpours can lead to drainage systems being overwhelmed, resulting in surface water and flash flooding situations. Properties at risk from this type of flash flooding are not the same as those at risk of high tides and rivers bursting their banks in times of excessive rainfall, and this can often take people by surprise.

Will London’s fountains be turned off in the drought?

London’s awash with play fountains, which are ideal for cooling day on a summer’s day. Naturally, though, they use a lot of water, and aren’t classed as essential, so there’s a chance they might be switched off as restrictions tighten — indeed, fountains in Kent have already been turned off as a hosepipe ban comes into force there. Before you travel to locations such as Granary Square, Southbank Centre and the Queen Elizabeth Olympic Park to make the most of their water features, do check that they’re still up and running.

How to save water

Most of us have had ways of saving water drilled into us from a young age, even in times of abundance; turning off the tap while you brush your teeth, not staying in the shower too long. We’re not here to patronise you, but if there’s a way you can up your water-saving capabilities, now’s the time to do so. Consider collecting your used washing up or shower water into a bowl or bucket, and using it to water garden or balcony plants if you have any, or if possible, take it out to the street and water any public trees or hedges which are looking a bit parched. Most water companies offer further tips on their website, along with this little lot on the Water Worth Saving site.

If possible, and you’re fortunate enough to have the outdoor space to do so, consider leaving a bowl or bucket full of water outside, to provide wildlife with a drinking source. Usual streams, puddles and ponds may have dried up.

As we’ve unfortunately already seen, the incredibly dry conditions are leading to wildfires breaking out all over London, putting extra strain on the emergency services and leading London Fire Brigade to declare a major incident during the extreme temperatures of mid-July.

As a result, LFB has called for a ban on the sale of disposable barbecues, with retailers including M&S and Sainsbury’s taking them off the shelves. We’re also asked to think very carefully before having barbecues, bonfires and campfires even in our own gardens, an open flames can get out of control very easily in dry conditions. Other advice includes disposing of rubbish, particularly cigarettes and glass, both of which pose a fire risk, safely.