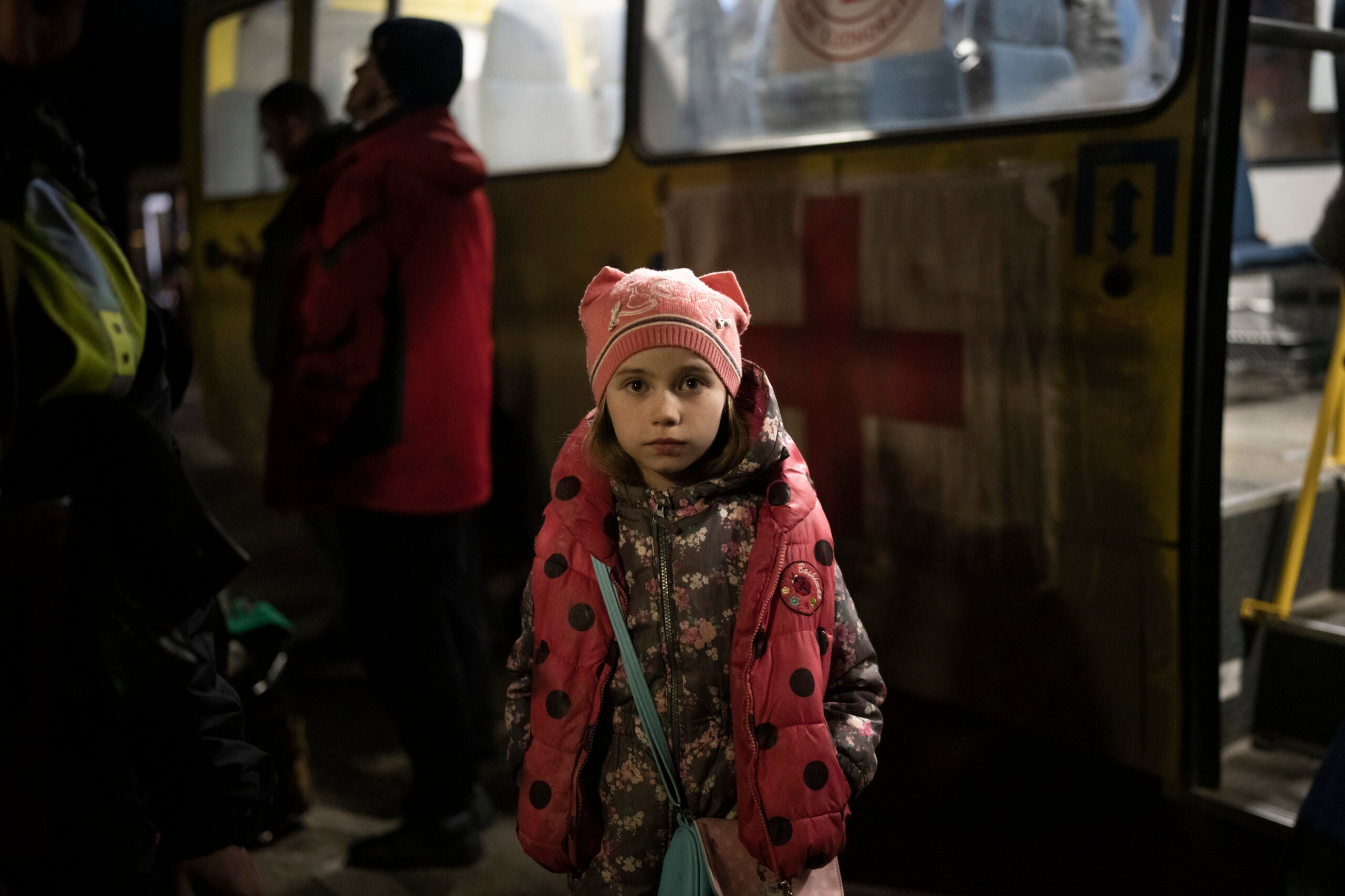 VALLETTA, Malta — Pope Francis says he is studying a possible visit to Kyiv and he blasted Russian President Vladimir Putin for launching a “savage” war, as he arrived in Malta and delivered his most pointed and personalized denunciation yet of Russia’s invasion of Ukraine.

Francis didn’t cite Putin by name, but the reference was clear when he said that “some potentate” had unleashed the threat of nuclear war on the world in an “infantile and destructive aggression” under the guise of “anachronist claims of nationalistic interests.”

Speaking to Maltese authorities Saturday, Francis said: “We had thought that invasions of other countries, savage street fighting and atomic threats were grim memories of a distant past.” Francis has to date avoided referring to Russia or Putin by name. But Saturday’s personalization of the powerful figure responsible marked a new level of outrage for the pope.

— What’s next for Europe’s natural gas amid the war?

— Ukraine volunteer fighters from near and far: a photo gallery

— Go to https://apnews.com/hub/russia-ukraine for more coverage

THE HAGUE, Netherlands — The Dutch government has launched a campaign urging people to turn down their central warming and take showers to save energy amid spiraling energy costs and reduce the country’s dependence on Russian imports.

The government took the lead, announcing Saturday that it will turn down the temperature in 200 of its office blocks from 21 to 19 degrees Celsius (70-66 degrees Fahrenheit) in the winter and use less air conditioning in the summer.

Minister for Climate and Energy Rob Jetten says that saving energy “is good for your wallet, for the climate and it helps us to become less dependent on gas from Russia.”

The government also is setting aside 4 billion euros ($4.4 billion) to help fund moves by home owners, social housing corporations and municipalities to improve insulation of houses in coming years.

LVIV, Ukraine — Ukrainian officials say their forces have recaptured the city of Brovary, 20 kilometers (12 miles) east of the capital Kyiv.

Brovary’s mayor said during a televised address on Friday evening that “Russian occupants have now left practically all of the Brovary district.” He added that the Ukrainian forces would begin working to clear the region of remaining Russian soldiers there as well as “military hardware, and possibly from mines.”

The mayor said that many Brovary residents had already returned to the city, and that shops and businesses were reopening.

Earlier on Friday, Kyiv mayor Vitali Klitschko said that satellite towns northwest of Kyiv were being targeted after Ukrainian fighters pushed back Russian troops, and that fighting had also taken place in Brovary.

SOFIA, Bulgaria — Bulgaria has expelled a Russian diplomat over accusations of spying who could not be charged because of his diplomatic immunity.

Bulgaria’s Foreign Ministry said in a statement late Friday that it declared a Russian diplomat “persona non grata” and gave him 72 hours to leave the country after it was informed by the prosecutor’s office that the diplomat had been involved in “unregulated intelligence activities.”

The expulsion comes as relations between Russia and NATO member Bulgaria, once Moscow’s closest ally in the now defunct Warsaw pact, have cooled down following Russia’s invasion of Ukraine.

Last month alone, Bulgaria expelled 12 Russian diplomats, accused Russia’s ambassador to Sofia of “undiplomatic, sharp and rude” comments made in public, and called back its ambassador from Moscow for consultations.

BEIJING — A Chinese diplomat has a suggestion for resolving the Ukraine conflict: U.S. President Joe Biden should call Russian President Vladimir Putin and promise there will be no further NATO expansion, no deployment of strategic weapons in Ukraine and that the country will remain neutral.

“Then maybe the issue will get sorted,” director general of the Chinese Foreign Ministry’s Department of European Affairs Wang Lutong told reporters in Beijing on Saturday.

“What is the purpose of the Americans? Are they going to see a cease fire in Ukraine or they would like to weaken Russia? Or some people are talking about a change in the government,” Wang said, in an apparent reference to Biden’s remark that Putin cannot be allowed to remain in office.

“If they are intent about a cease fire, I think this issue could be sorted very easily,” Wang said. His remarks followed talks between Chinese and EU leaders at which Beijing reiterated its opposition to punishing economic sanctions against Russia.

Beijing has refused to criticize the Russian invasion, or even refer to it as such, opposes sanctions and rebroadcasts Russian misinformation about the conflict and unfounded claims such as that the U.S. is operating bioweapons laboratories in Ukraine.

Ukrainian President Volodymyr Zelenskyy declined to comment on whether he ordered an attack on a Russian fuel depot.

In an interview with FOX News, Zelenskyy said he does not discuss any orders he issues as commander in chief.

Earlier, the secretary of Ukraine’s national security council denied allegations from Moscow that two Ukrainian helicopter gunships had struck the facility in the city of Belgorod north of the border at around dawn Friday.

The regional governor in Belgorod said two workers at the depot were injured, but Russian media cited a statement from state oil company Rosneft that denied anyone was hurt.

But if Moscow’s claim is confirmed, it would be the war’s first known attack in which Ukrainian aircraft penetrated Russian airspace.

WASHINGTON — The U.S. Defense Department says it is providing an additional $300 million in military equipment to Ukrainian forces defending the country from Russian troops.

Kirby said the new package “represents the beginning of a contracting process to provide new capabilities” to Ukraine, rather than delivering equipment drawn from U.S. military stockpiles.

The U.S. has provided more than $1.6 billion in security assistance since Russia’s invasion, Kirby said.

LVIV, Ukraine — Ukrainian President Volodymyr Zelenskyy said Russian forces were leaving behind “a complete disaster” as they retreat from the north, including towns just outside Kyiv, and he warned residents to beware of more Russian shelling and of land mines.

“They are mining the whole territory, they are mining homes, mining equipment, even the bodies of people who were killed,” he said in his nighttime video address to the nation late Friday.

He urged residents to wait to resume their normal lives until they are assured that the mines have been cleared and the danger of shelling has passed.

Zelenskyy warned of difficult battles ahead as the Russians redeploy troops in eastern Ukraine.

Zelensky said he spoke Friday with French President Emmanuel Macron by telephone and with the president of the European Parliament, Roberta Metsola, during her visit to Kyiv.

“Europe doesn’t have the right to be silent about what is happening in our Mariupol,” he said. “The whole world should respond to this humanitarian catastrophe.”

Zelenskyy said 3,071 people were able to leave Mariupol on Friday.

LVIV, Ukraine — A Ukrainian official said there were casualties after at least three Russian ballistic missiles were fired late Friday at the Odesa region on the Black Sea, but he did not give specifics.

Regional leader Maksim Marchenko said the missiles were fired from the Crimean Peninsula, which Russia has held since seizing it from Ukraine in 2014.

The Ukrainian military said the Iskander missiles were intended for critical infrastructure but did not hit their targets because of the response of Ukraine’s air-defense forces. It was unclear where they hit.

Odesa is Ukraine’s largest port and the headquarters of its navy.

KYIV, Ukraine — The secretary of Ukraine’s national security council has denied the country was responsible for a reported attack on a Russian fuel depot.

Moscow had earlier placed the blame on Ukraine. There was no independent confirmation of details about the incident.

“For some reason they say that we did it, but in fact this does not correspond with reality,” Oleksiy Danilov said on Ukrainian television on Friday.

Regional Gov. Vyacheslav Gladkov said earlier that two Ukrainian helicopter gunships had flown at low altitude and struck the facility in the city of Belgorod north of the border.

Two workers at the depot were injured, he said. But Russian media cited a statement from state oil company Rosneft that denied anyone was hurt.

Meanwhile, Ukrainian President Volodymr Zelenskyy’s office said 86 Ukrainian service members were freed in the Zaporizhzhia region as part of a prisoner swap with Russia. The number of Russians released was not disclosed.

KYIV, Ukraine – The mayor of Kyiv said the bombardment of satellite towns near the Ukrainian capital was ongoing despite Russian promises of scaling back troops from the region.

Vitali Klitschko told British broadcaster Sky News on Friday he could hear the sounds of explosions “nonstop during the day and night.”

Klitschko said that the cities northwest of Kyiv such as Irpin, Borodyanka and Hostomel were being targeted after Ukrainian fighters moved back Russian troops, and that fighting also persisted in Brovary, east of Kyiv.

For those who may want to return to Kyiv in light of the supposed Russian withdrawal, he urged people to wait a “couple of weeks” to see how the situation develops.