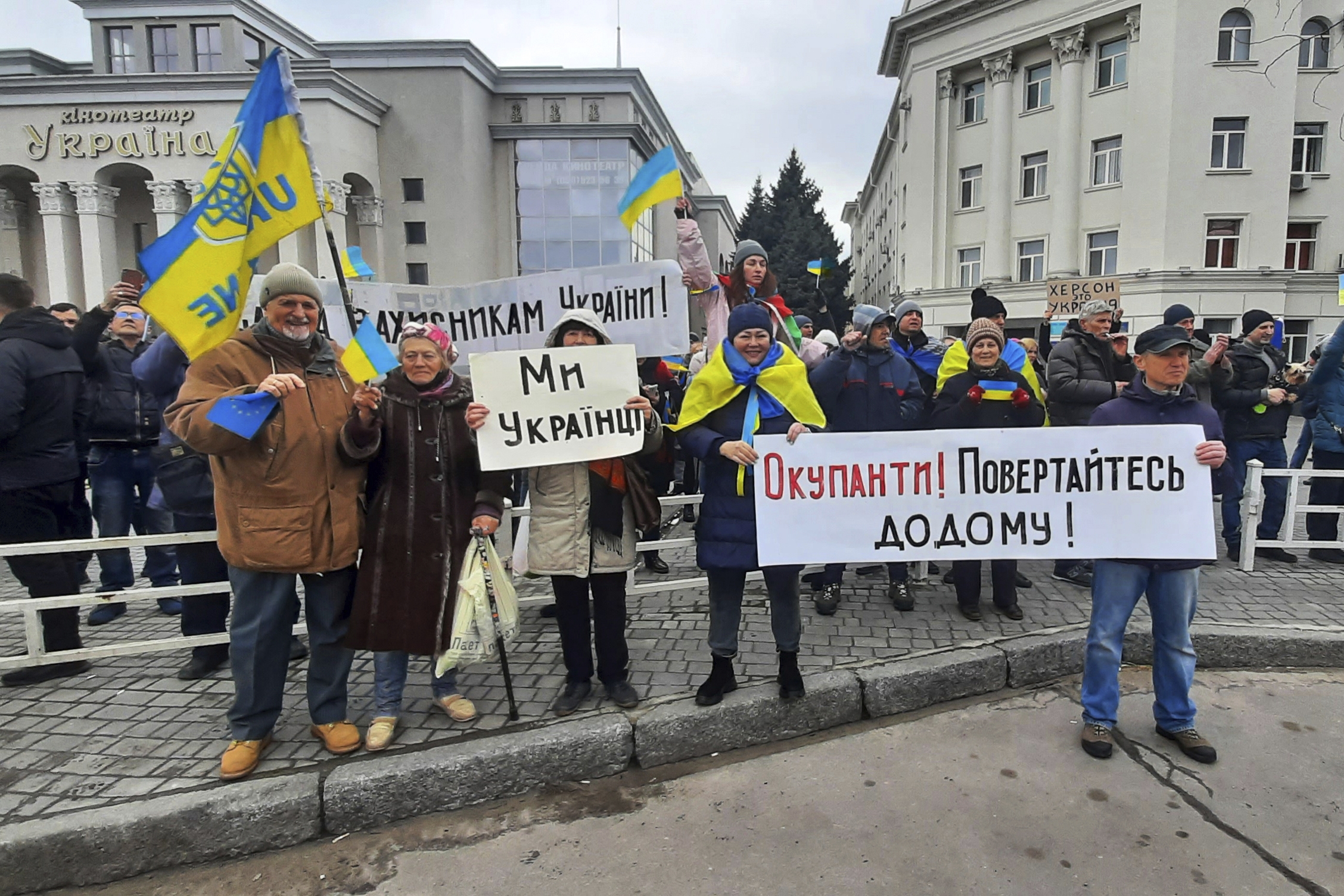 Key developments and updates from the Russian war in Ukraine.

KYIV, Ukraine — Mariupol authorities are sounding the alarm about unsanitary conditions in the ravaged port city that they say pose a “deadly danger” to its remaining residents.

Mariupol City Council said on the messaging app Telegram Thursday that “deadly epidemics may break out in the city due to the lack of centralized water supply and sewerage, the decomposition of thousands of corpses under the rubble, a catastrophic shortage of drinking water and food.”

It said that the lives of 100,000 people who still remain in Mariupol, out of 450,000 pre-war residents, may be in danger — pointing to diseases like cholera and dysentery.

The Telegram post cited Mariupol Mayor Vadym Boychenko as saying that “the invaders are not able to provide the remaining population with food, water and medicines — or are simply not interested in that.” He said that “living conditions in the ruined Mariupol are now medieval” and that “an immediate and complete evacuation is needed.”

— Most in US fear Ukraine war misinformation: AP-NORC poll

Follow all AP stories on Russia’s war on Ukraine at https://apnews.com/hub/russia-ukraine

BERLIN — German police have recorded more than 1,700 crimes in the country in connection with the war in Ukraine, most of them property damage and insults.

The group Mediendienst Integration said Thursday that a survey of all German police authorities showed that the crimes largely targeted people of Russian or Ukrainian origin, or their property.

The group said more than 160 cases of violence against a person were recorded. Authorities have also opened 170 investigations over the use of the ‘Z’ symbol that in some contexts is considered to be a show of support for Russia’s war in Ukraine, which Germany deems illegal.

Germany has a large population of migrants from the former Soviet Union. Since the outbreak of the war in February it also has taken in almost 400,000 Ukrainians seeking shelter from the conflict.

WASHINGTON — A majority of U.S. adults say misinformation around Russia’s invasion of Ukraine is a major problem, and they largely fault the Russian government for spreading those falsehoods.

A new poll from The Associated Press-NORC Center for Public Affairs Research shows 61% of people in the United States say the spread of misinformation about the war is a major problem, with only 7% saying it’s not a problem. Older adults were more likely to identify the wartime misinformation as an issue, with 44% of those under 30 calling it a problem, compared with 65% of those 30 or older.

Misleading social media posts, fake pictures or videos and propagandized headlines have proliferated on websites, from TikTok to Facebook, since Russia’s assault on Ukraine began in February. In recent weeks, Russian state media and social media accounts have operated in lockstep to push tweets, TV reports and posts that claim photos of bombed buildings and bodies across Ukraine have been staged or faked.

KYIV, Ukraine — United Nations Secretary-General Antonio Guterres has toured areas outside the Ukrainian capital that suffered damage during the Russian advance there.

Speaking to journalists on Thursday at several points, Guterres urged Russia to cooperate with the International Criminal Court. That’s after the bodies of civilians were found in areas once held by Russian forces, some shot with their hands bound.

Guterres also said that “civilians always pay the highest price” in any war.

“When I see those destroyed buildings, I must say what I feel. I imagined my family in one of those houses that is now destroyed and black. I see my granddaughters running away in panic, part of the family eventually killed,” he said. “So, the war is an absurdity in the 21st century. The war is evil. And when one sees these situations our heart, of course, stays with the victims.”

He also added: “When we talk about war crimes, we cannot forget that the worst of crimes is war itself.”

BERLIN — German lawmakers have voted in favor of sending heavy weapons to Ukraine, a symbolic decision that reflects the government’s change of course on the issue.

Germany had initially refused to send any offensive weapons to Ukraine and later balked at sending heavy equipment such as armored vehicles.

Under pressure domestically and from allies, Chancellor Olaf Scholz’s government agreed recently to let Ukraine purchase German armaments and support weapons swaps with allies who in turn are sending heavy gear to Ukraine.

Germany has already sent about 2,500 anti-aircraft missiles, 900 bazookas, and millions of rounds of ammunition, hand grenades and mines to Ukraine, the dpa news agency reported. It now plans to give armored vehicles to Slovenia to replace Soviet-era tanks the country is sending to Ukraine, send mortars directly to Ukraine and let Kyiv purchase mothballed self-propelled armored anti-aircraft guns from Germany.

German companies have also asked to send 88 Leopard tanks, 100 Marder armored vehicles and 100 howitzers to Ukraine, permission for which has yet to be granted.

Thursday’s non-binding motion — with 586 lawmakers in favor, 100 against and seven abstentions — received support from governing parties and the main opposition Union bloc of ex-Chancellor Angela Merkel.

LVIV, Ukraine — Satellite photos analyzed by The Associated Press show Russian fire is intensifying on a steel mill that is the last Ukrainian-held area in the city of Mariupol.

The images by Planet Labs PBC shot Wednesday show that concentrated attacks have greatly damaged a central facility at the Azovstal steelworks.

An estimated 1,000 civilians are sheltering along with about 2,000 Ukrainian fighters in the steelworks, a massive Soviet-era complex with a warren of underground facilities built to withstand airstrikes.

Mariupol, a strategic port city on the Sea of Azov, is viewed as crucial for the Russians in the war.

The new images come as U.N. Secretary-General Antonio Guterres visits Ukraine and plans to speak to Ukraine’s president about his efforts to negotiate with Moscow for a corridor for people to leave the besieged area.

BRUSSELS — NATO Secretary General Jens Stoltenberg says that Finland and Sweden would be embraced with open arms should they decide to join the 30-nation military organization and could join quite quickly.

Stoltenberg’s remarks Thursday come as public support in Finland and Sweden for NATO membership mounts in response to Russia’s war on Ukraine. Media speculation in the two countries suggests the two might apply in mid-May.

Stoltenberg says that “it’s their decision. But if they decide to apply, Finland and Sweden will be warmly welcomed, and I expect that process to go quickly.”

He gave no precise time frame, but did say that the two could expect some protection should Russia try to intimidate them from the time they apply until they formally join.

Stoltenberg says he’s “confident that there are ways to bridge that interim period in a way which is good enough and works for both Finland and Sweden.”

NATO’s collective security guarantee ensures that all member countries must come to the aid of any ally under attack. Stoltenberg added that many NATO allies have now pledged or provided a total of at least $8 billion in military support to Ukraine.

— This item has been corrected to say that NATO allies pledged or provided at least $8 billion.

LONDON — Britain’s defense ministry says the Russian navy still has the ability to strike coastal targets in Ukraine, even after the losses of two warships.

In an intelligence briefing posted Thursday morning, the ministry says that about 20 Russian naval vessels, including submarines, are currently operating in the Black Sea operational zone.

But the ministry says Russia isn’t able to replace the cruiser Moskva, which sank earlier this month in the Black Sea, because the Bosporus remains closed to all non-Turkish warships.

Russia also lost the landing ship Saratov, which was destroyed by explosions and fire on March 24.

KYIV, Ukraine — Ukraine’s General Staff says Russia is increasing the pace of its offensive in the east of the country, the goal of which is to take full control of the Donetsk and Luhansk regions and have a land corridor to Crimea.

The Russian forces “are exerting intense fire” in almost all directions, the General Staff said in their Thursday morning update, with the “greatest activity observed in Slobozhanske and Donetsk directions.”

Strikes on Kharkiv, Ukraine’s second largest city, continue, the update said, and more forces have been moved to the city of Izyum. In the Donetsk direction, the Russian troops are focusing on encircling the Ukrainian forces.

Over the past 24 hours, the Ukrainian forces have repelled six attacks in the Donetsk and Luhansk regions, the General Staff said.

KYIV, Ukraine — Serhiy Haidai, the governor of the Luhansk region, says Thursday that four civilians have died in the region over the past 24 hours and four more were wounded.

The Russian shelling has also destroyed 10 houses in the city of Popasna, Haidai said in the messaging app Telegram.

CAMP ATTERBURY, Indiana — The war in Ukraine has National Guard troops in the U.S. state of Indiana preparing equipment for transport to help Kyiv fight Russia.

The M113 is an older armored carrier dating back to the 1960s and the height of the Cold War between the U.S. and the Soviet Union.

But these armored carriers still run and appear to be battle-ready. At Camp Atterbury, just south of Indianapolis, Guardsmen checked their treads, engines and other equipment before loading them onto trucks to send to the battlefield.

It’s part of a massive effort by the U.S. and other Western allies to arm Ukraine.

KYIV, Ukraine — In the southern Ukrainian city of Kherson, a series of explosions boomed near the television tower late Wednesday and at least temporarily knocked Russian channels off the air, Ukrainian and Russian news organizations reported.

The Russian state news agency RIA Novosti said missiles and rockets were fired at the city from the direction of the Ukrainian forces to the northwest.

Kherson has been occupied by Russian forces since early in the war.

Ukrayinska Pravda, an online newspaper, said the strikes set off a fire and knocked Russian television channels off the air.

Russia has been determined to strengthen its control over the city, but residents have continued to come out onto the streets to protest the occupation.

BERLIN — An independent research group says Germany was the biggest buyer of Russian energy during the first two months since the start of the war in Ukraine.

A study published by the Centre for Research on Energy and Clean Air calculates that Russia earned $66.5 billion from fossil fuel exports since Russian troops attacked Ukraine on Feb. 24.

Using data on ship movements, real-time tracking of gas flows through pipelines and estimates based on historical monthly trade, the researchers reckon Germany paid Russia about 9.1 billion euros ($9.5 billion) for fossil fuel deliveries in the first two months of the war.

The German government says it can’t comment on estimates and declines to provide any figures of its own.