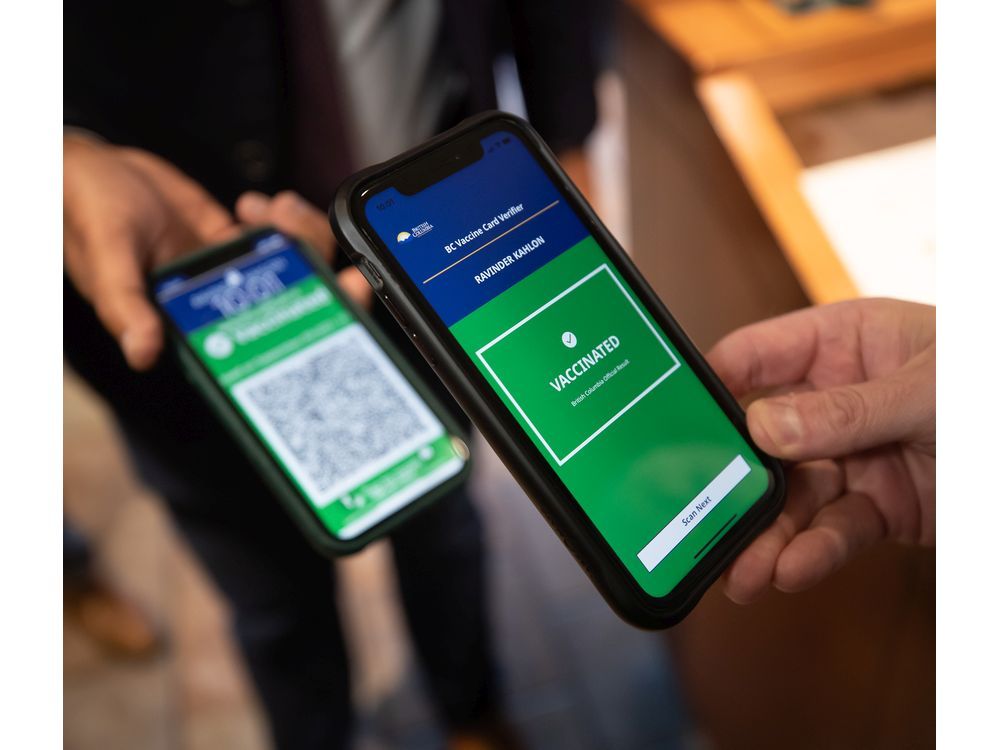 Kudos to Denyne Butler of Richmond for calling out the provincial and federal governments for assuming everyone has a smartphone (Jan. 4 Letters to the Editor).

According to a national TV news broadcast a couple of months ago, 39 per cent of Canadian seniors don’t have smartphones. Presumably, a fair number of younger Canadians also do not own such devices. I suspect this represents tens of thousands, if not hundreds of thousands of B.C. residents — and, potentially, millions of Canadians.

A recent study by Simon Fraser University’s STAR Institute appears to corroborate that a significant number of B.C. seniors either don’t have smartphones, or they aren’t particularly tech savvy. Interestingly, according to the SFU study, seniors were not consulted prior to the B.C. government announcing its proof-of-vaccination roll-out plan.

I tried to bring this issue to Dr. Bonnie Henry’s attention when the government initially announced its plan to implement a vaccine passport requirement, where proof of vaccination would have to be downloaded onto your smartphone. As I explained to her, I failed the IQ test you need to pass in order to purchase a smartphone. Plus, I don’t have $50 to $80 per month to waste on something that allows me to track the personal grooming habits of my 10,000 closest friends.

As an alternative, I suggested the government consider allowing people without smartphones to continue using the wallet-size cardboard cards we received when we were vaccinated. I noted that if the border ever reopened (which it subsequently did for about 30 seconds), Dr. Henry would still have to produce her paper Canadian passport if she wanted to leave the country and re-enter it.

Getting no response from Dr. Henry (she did say she reads all our e-mails), I forwarded my suggestion/request to her boss, Health Minister Adrian Dix. He also chose to ignore me.

Recently, their federal counterparts introduced a similar requirement for people to produce digital proof that they had been vaccinated if they want to travel outside Canada — although our real passports are still on paper and must be presented when exiting/entering Canada. As usual, the federal system is even more complicated — you have to go online once you are out of Canada to tell the government when you want to come home.

I subsequently got tired of being ignored and used my PC to go online and download a digital image of my vaccination data. I printed it and carried it around with me in my car.

Unfortunately, at one point, the paper got wet and the digital image dissolved into a sea of green goop. Fortunately, I have a second, tiny paper copy laminated onto the back of my cardboard vaccination card that most restaurants, etc., accept as proof of my vaccination.

In short, as Denyne Butler pointed out, many of us in B.C. and across Canada don’t have, don’t want, or can’t afford smartphones. The lack of such devices makes travel and access to other services virtually impossible, or extremely arduous under the current federal/provincial requirements — even though most of us have willingly complied with all of the COVID-related requirements and conditions they have imposed on us over the past two years.

It would be nice if politicians here and in Ottawa could take five minutes away from tweeting and texting on their taxpayer-funded smartphones and actually give this issue some meaningful thought.