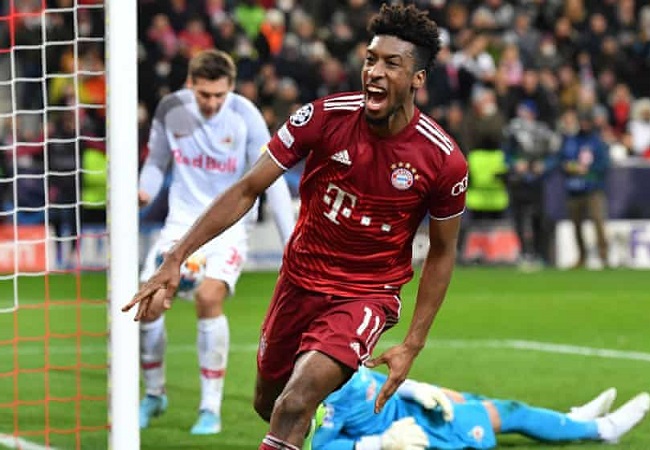 Bayern Munich played 1-1 draw against FC Salzburg this Wednesday night. Kingsley Coman scored a 90th-minute equaliser to help the German champions to a late 1-1 draw away to the host in the first-leg of their Champions League round-of-16 clash.

Salzburg’s Chukwubuike Adamu came off the bench at the Red Bull Arena on 12 minutes to replace Noah Okafor, who was forced off through injury. And the striker made an instant impact, handing Salzburg the lead just nine minutes later when he ran onto the ball at the edge of the 18-yard box and curled home past Bayern goalkeeper Sven Ulreich.

Salzburg were denied a penalty on the stroke of half-time after Benjamin Pavard made a reckless tackle on Karim Adeyemi. But the referee ruled that Pavard did not make contact with the attacker.

Bayern pressed for a late equaliser. And they were rewarded when Coman took advantage from a Thomas Muller flick on from a deep cross to the back post, where the Frenchman struck past Salzburg goalkeeper Phillipp Kohn.

Wednesday’s tie was Salzburg’s first-ever match in the knockout stages of the Champions League.

The return leg will take place at the Allianz Arena in Munich on March 8.