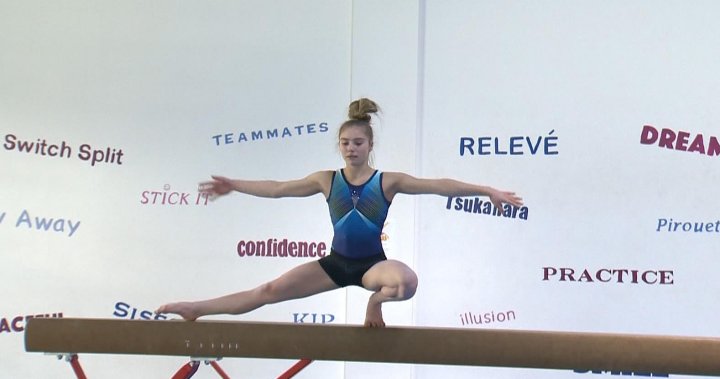 A Kelowna athlete will be competing in the Western Artistic Gymnastic Championships in Winnipeg this week.

Alexa Martin, 16, is ranked as one of the top athletes in her category in B.C.

“I just love the sport in general,” said Martin, “and so when you’re doing something you love, it doesn’t feel like work.”

The Kelowna teen currently trains 20 hours a week. Her drills include tumbling across the floor, vaulting into the air and finding balance on the beam.

“The beam, I like the artistry and all the skills you can work on,” said Martin, “even though it does take a lot of focus because you are on something that’s only four inches wide.”

One of Martin’s coaches, Haillie Soetaert, said she has the right mental attitude for gymnastics.

“And that’s probably one of her biggest strengths,” said Soetaert, adding she also has natural ability. “She’s strong and she’s flexible. But her biggest thing that has helped her is that mental strength.”

Martin is springing up quickly in the world of competitive gymnastics and was recently ranked among B.C.’s top athletes in her category.

“Now that she’s been moving into higher-level competitive gymnastics, the skills are getting more technical and more difficult,” said coach Tami Calkins. “So we’ve been focusing on her training and helping her get there.”

Martin has now been training in the sport for nearly a decade. And, in turn, she’s now coaching six- and seven-year-old gymnasts.

“It’s kind of cool because they’re just starting their gymnastics careers,” said Martin. “And so I get to use my passion and get to share it with them in a way.”

4:59
Tips to help kids be their best in sport and life

For now, though, Martin’s attention is set on the next competition.

She’s bound for Winnipeg as part of Team B.C., which will compete against athletes from the rest of western Canada.

“It’s more important to stay in the moment and not focus on the things that can go wrong,” said Martin, “and more on things that could go right.”