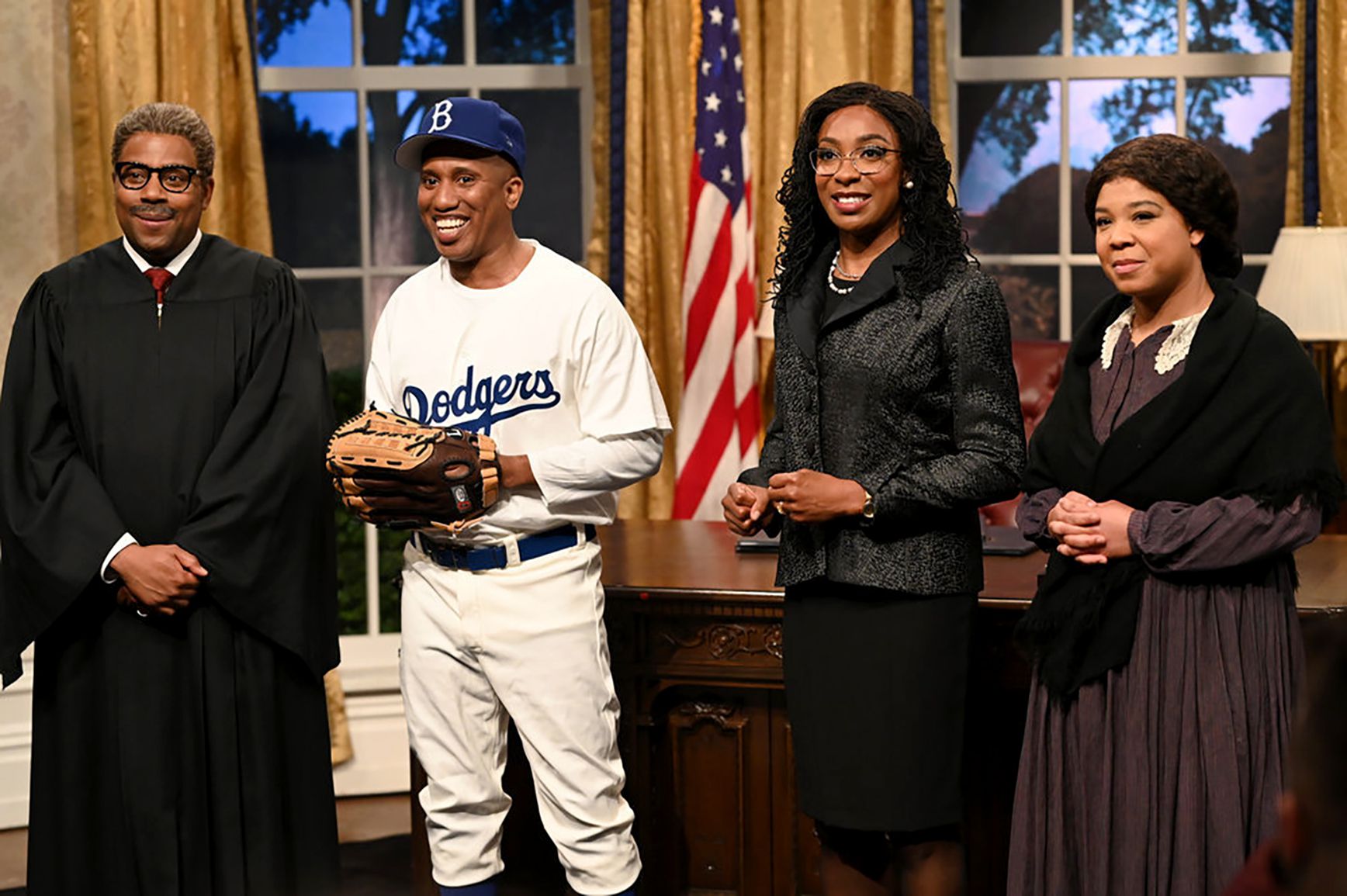 History was made this past week when Judge Ketanji Brown Jackson was confirmed by the Senate Thursday, making her the first Black woman to become a justice of the Supreme Court.

And, though it was not quite as monumental in scale, a “Saturday Night Live” sketch commemorated this achievement, imagining Jackson (as played by Ego Nwodim) preparing for a celebratory speech as she consulted with President Joe Biden (James Austin Johnson) at the White House.

Johnson, as Biden, gave himself a pat on the back: “I made a campaign promise to put a Black woman on the court, and I did it,” he said. “So that’s one campaign promise down and only 74 to go.”

Nwodim, as Jackson, explained that she was happy to do her part to ensure her confirmation: “Work twice as hard as a white man my entire life, and then spend a week listening to Ted Cruz call me a pedophile,” she said.

As he exited, Johnson gave her some words of encouragement. “Take a moment in this room,” he said. “Feel the weight of history. Sometimes I like to imagine talking to all the great Americans who came before me.”

Reflecting on this advice, Nwodim asked herself, “Who would I want to talk to?”

So saying, she was joined by Kate McKinnon, who returned to her recurring role as the late Justice Ruth Bader Ginsburg and offered Nwodim some guidance.

“Here’s my advice,” McKinnon said. “Always label your lunches. A lot of those other justices, they got sticky fingers.” Also, she said, “If you’re anything like me, white ladies are going to start wearing buttons of your face like an ‘I voted’ sticker. It’s freaky but they mean well.”

Next, Kenan Thompson entered as Justice Thurgood Marshall. Reflecting on his time at the forefront of the civil rights movement, Thompson said, “I was there when people of color in this country came together with one voice and said enough is enough. And then white folks said, we’ll think about it.”

Even so, Thompson told Nwodim not to give up on democracy. “I mean, I was the first Black Supreme Court justice,” he said. “You must be, what, the 10th? The 20th?

Nwodim replied, “No, just the third.”

Punkie Johnson, who appeared as Harriet Tubman, grew suspicious when she learned from Nwodim that she’d be serving a lifetime appointment: “Don’t like that,” Johnson said. “Sounds like a trap.”

When Nwodim assured her it wasn’t, Johnson answered, “OK, but if it is, light two candles and meet me in the farmhouse at midnight.”

“Let me tell you, being the first is kind of fun,” he said. “Yeah. It’s fun. Here’s my advice: Watch out for batteries. You will get so many batteries thrown at you.”

“Oh, excuse me for a second,” said Redd, who then emitted a primal scream into his baseball glove. He caught his breath and added, “Thank you. I’ve been holding that in since 1947.”

Opening Monologue of the Week

How long has it been since Jake Gyllenhaal last hosted “Saturday Night Live”? As the actor explained in his opening monologue, he made his only other appearance as an “SNL” host back in 2007.

For that previous monologue, Gyllenhaal had dressed in drag and performed “And I Am Telling You I’m Not Going,” from the musical “Dreamgirls.” He made clear those same antics probably wouldn’t fly in 2022, but he did sing again — this time, a slightly altered version of “It’s All Coming Back to Me Now,” a Jim Steinman rock opus popularized by Celine Dion.

Weekend Update Jokes of the Week

Over at the Weekend Update desk, anchors Colin Jost and Michael Che continued to riff on Jackson’s confirmation process.

The Senate confirmed Ketanji Brown Jackson, making her the first Black woman to serve on the Supreme Court. “I’ll drink to that,” said Brett Kavanaugh. Justice Jackson was honored Friday at a White House ceremony and said, “We have come a long way toward perfecting our Union.” Which is a direct quote from Ben Affleck’s proposal to J. Lo. Republican Sen. Tom Cotton, who wants everyone to cool it with the long neck jokes, said he believes Supreme Court Justice Jackson would have defended the Nazis. Worse, he meant it as a compliment.

Sen. Mitch McConnell, seen here watching the Oscars in memoriam package, reportedly said that his no vote on Ketanji Brown Jackson’s Supreme Court nomination was not based on race or gender, but on Ketanji’s refusal to answer his question: Can I touch your hair?

The presence of Willow Smith on “SNL” this weekend — she joined musical guest Camila Cabello in one of her performances — didn’t dissuade Weekend Update from continuing to take aim at the Oscars exploits of her father, Will Smith.

As punishment for slapping Chris Rock, the Academy of Motion Picture Arts and Sciences has banned Will Smith from attending the Oscars for 10 years. But is that a punishment? He can still be nominated and even win an award. He can even go to the after-party. He just doesn’t have to attend the four-hour ceremony where somebody is definitely going to make fun of his wife again. Honestly, I think a real punishment would be to make Will Smith host next year’s Oscars. Because trust me, nothing will make you question your choices in life more than hosting an awards show (the screen shows an image of Jost and Che hosting the Emmy Awards).

Get news delivered to your inbox each morning.