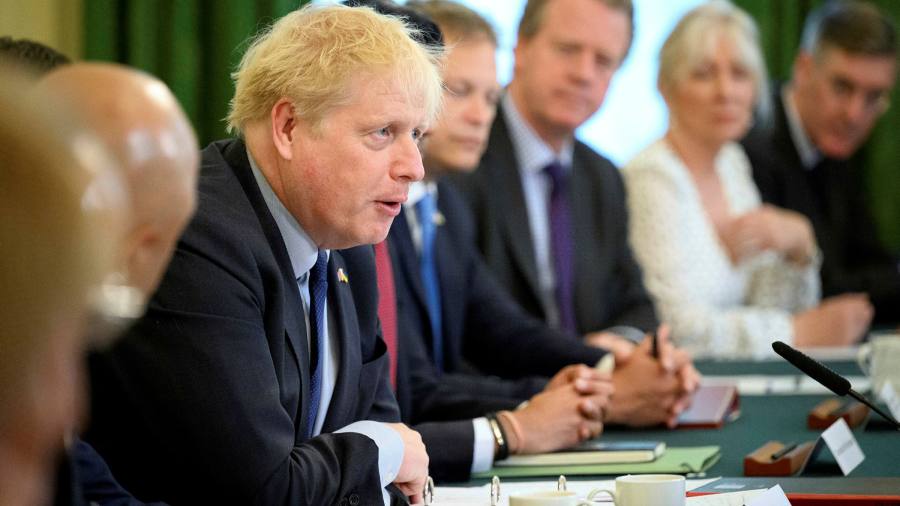 Boris Johnson has put key ministers on notice to improve execution of the government’s core policy reforms or face the axe in a reshuffle later this year, as he tries to regain a grip after a major rebellion by Tory MPs.

The prime minister used a cabinet meeting on Tuesday to urge ministers to focus on practical issues and move on from a highly damaging no-confidence vote in which 41 per cent of Conservative MPs supported his removal following the partygate scandal.

Johnson won Monday’s ballot of Tory MPs by 211 votes to 148, and although he told his cabinet the result had been “conclusive and decisive”, some rebel Conservatives claimed he had been fatally wounded politically.

The rebels said party rules could be changed to allow another challenge to Johnson’s leadership within 12 months, if the prime minister fails to raise his game and the Conservatives’ fortunes continue to slide.

Under current Tory rules, Johnson cannot face another no-confidence vote for a year, but senior Conservatives have said the arrangements could be changed.

One ally of Johnson said he would not carry out a snap reshuffle in response to Monday’s vote but would examine whether ministers were delivering on key policies including the economy, energy, health and housing.

“Boris knows people have to perform and some are not,” he added. “He will assess performance in the cold hard light of day. Ministers need to ensure their departments are acting more swiftly and effectively.”

The Johnson ally said the prime minister was in a “unifying mood” and was not seeking to be vengeful towards MPs who had criticised his leadership. “Any reshuffle will be some time away and performance will be watched in the meantime,” he added.

Johnson is expected to make a major speech next week alongside chancellor Rishi Sunak, setting out a plan for economic growth and stressing the importance of future tax cuts.

But Sunak’s allies said the speech would not amount to a “fiscal event” and was still in the planning stages. “It’s rather vague at the moment,” said one ally.

Johnson told cabinet ministers to find further savings in their Whitehall departments to try to shift spending towards households amid the cost of living crisis.

The prime minister received one boost on Tuesday when President Volodymyr Zelenskyy of Ukraine told the Financial Times Global Boardroom conference that his survival was “great news”, adding: “I am glad we have not lost a very important ally.”

Johnson’s team was relieved the no-confidence vote was not immediately followed by any resignations by ministers no longer willing to serve in his government.

But some Tory MPs believe Monday’s vote starts the beginning of a long slide out of office for Johnson, who is contending with multiple issues including rising inflation and possible recession.

Johnson also faces a parliamentary inquiry into whether he knowingly misled the House of Commons about the partygate scandal and two parliamentary by-elections.

The Conservatives are defending seats in Wakefield in northern England and Tiverton and Honiton in the south west on June 23 and opinion polls have shown them lagging opposition parties in both.

One Tory MP said: “One can hope that Johnson does the honourable thing and walks away with dignity. But he won’t of course.”

Tobias Ellwood, Tory chair of the House of Commons defence select committee and a Johnson critic, said: “The days of honourable resignations are no longer there.”

Lord William Hague, a former Tory foreign secretary, wrote in The Times that the votes cast against Johnson’s leadership “show a greater level of rejection than any Tory leader has ever endured and survived”. He called on the prime minister to step down.