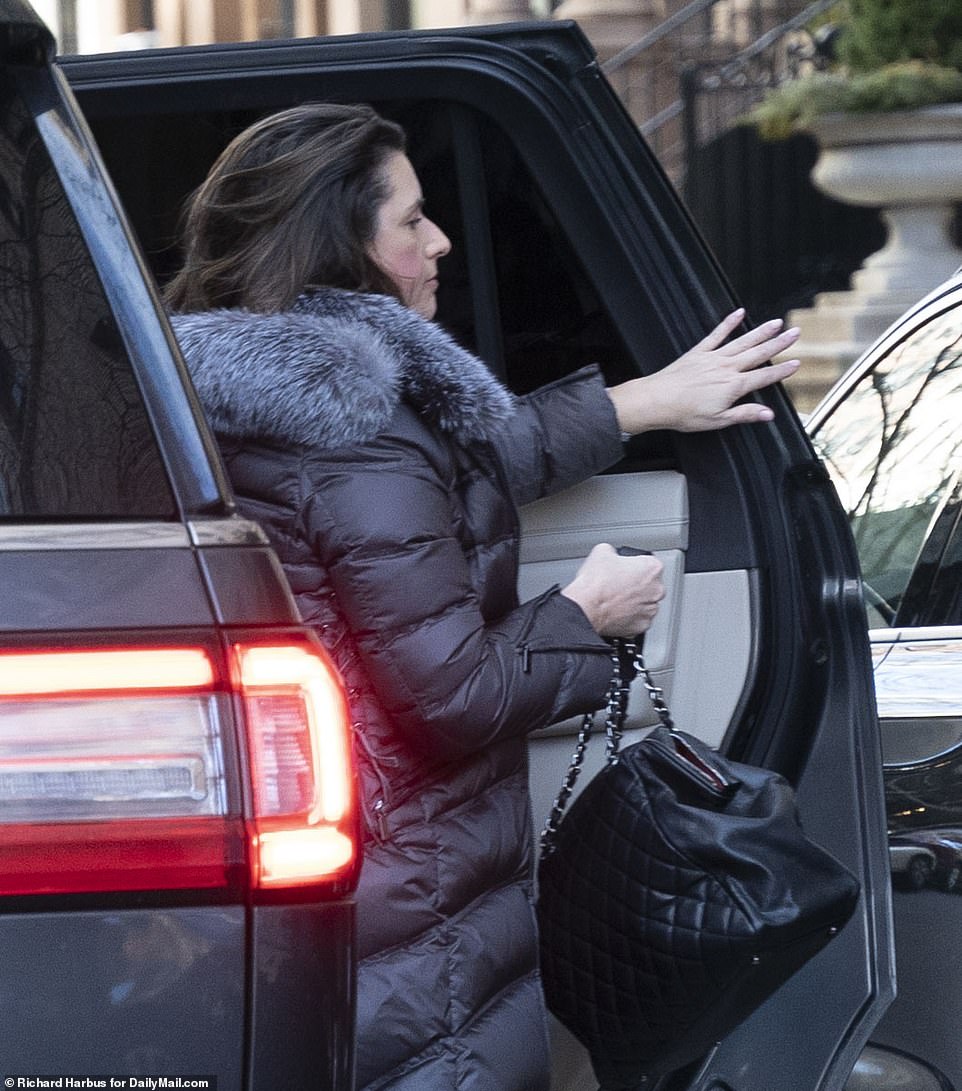 CNN executive Allison Gollust was forced to resign after an internal investigation found she had violated company policy by agreeing to set questions to ask former New York Governor Andrew Cuomo before he appeared for an on-air interview.

But Gollust did not act alone: an internal probe revealed she, her lover and former network president Jeff Zucker, and former anchor Chris Cuomo all violated company policies and ‘unethically aided’ Andrew Cuomo.

The governor’s interview, taking place during the first few weeks of the pandemic, occurred one Saturday in March 2020.

According to The New York Times, then-Governor Cuomo is said to have informed Gollust what subjects he wished to be asked about while on the network.

Gollust, who was chief of communications and marketing at CNN, also knew the governor well, having worked for him in late 2012 and early 2013.

The governor’s question request was passed along to CNN producers before Gollust then replied back to Cuomo over an email saying ‘done,’ The Times reported on Friday.

Gollust was shown the door at CNN on Tuesday after an internal investigation found a stack of written communications between her and Andrew Cuomo.

Zucker was also aware of the multiple communications between Gollust and the governor, according to the report.

Gollust was seen in Manhattan again on Friday, arriving back to her apartment wearing sneakers, yoga pants and a long down jacket with a fur-trimmed hood. She carried a black Chanel handbag.

Allison Gollust, the former CNN executive, arrived back at her apartment on Friday

She donned sneakers, yoga pants, a designer handbag and long down jacket with a fur trimmed hood

The Times reports how investigators found messages which detailed three specific topics the governor wanted to be asked about during his time on-air in the March 28, 2020 broadcast.

The subjects included a recent phone conversation with then-President Donald Trump about the idea of New York City being placed under a lockdown.

Gollust reportedly passed the request directly onto program producers in order that they include the questions in the interview.

Law firm Cravath Swaine & Moore, which had already been conducting a review of how the entire Chris Cuomo scandal had been dealt with at the end of last year, reviewed transcripts of the broadcast that confirmed the anchor followed Gollust’s instructions and asked the governor the topics he had suggested.

Together with Zucker, she lobbied Andrew Cuomo to appear on their network, violating company policy and calling into question their own condemnation of Chris Cuomo’s actions, the report found.

Gollust is said to have allowed New York Governor Andrew Cuomo, right, to suggest questions to ask him during an interview on CNN. Former president of the network, Jeff Zucker, seen left

There appeared to be a close relationship between Cuomo and Zucker, who along with Gollust provided him with media training during the pandemic. Tina Fey is seen center in a 2008 snap

The pair contacted the then-governor of New York directly to try and convince him to appear on his brother Chris Cuomo’s show during the pandemic, despite the brotherly interviews breaching journalistic protocols.

When Andrew Cuomo’s team declined, they would make direct appeals.

One allegation suggests the disgraced governor even received one-to-one media coaching for his popular pandemic press conferences from Zucker and Gollust.

Gollust and Zucker reportedly advised the former governor on how to handle the COVID crisis and even gave him ‘talking points’ on how to spar with then-President Donald Trump.

CNN also devoted over an hour of uninterrupted airtime to Andrew Cuomo’s daily, televised press briefings throughout the pandemic. The stardom won Andrew Cuomo an Emmy and an army of fans who begged him to run for President.

But Risa Heller, a spokeswoman for Ms. Gollust, has said the communications with the governor were entirely appropriate.

Gollust ‘in no way suggested that inclusion of these topics was a condition of the interview, nor did she suggest the interview should be limited to these subjects,’ Heller explained.

‘WarnerMedia relying on this everyday practice as justification for dismissing Allison demonstrates how ignorant they are of journalistic practices, and further proves that her dismissal is nothing more than retaliation.’

Heller also explained how Gollust ‘acted as the principal booker for Governor Cuomo during the early days of the pandemic’ with her role ‘well known by the entire network.’

Although producers and bookers for rolling news channels regularly discuss possible topics and questions in advance of interviewing a subject, it is highly unusual to be sent ‘suggested questions’ by the interviewee themselves.

It is also unusual for a senior executive to be involved in the interview prep before the on-air slot, especially if that person had previously worked for the person who is about to be interviewed on air.

Gollust acknowledged her exit in a bitter email to her staff claiming that CNN was trying to undermine her in public.  ‘WarnerMedia’s statement tonight is an attempt to retaliate against me and change the media narrative in the wake of their disastrous handling of the last two weeks.

‘It is deeply disappointing that after spending the past nine years defending and upholding CNN’s highest standards of journalistic integrity, I would be treated this way as I leave. But I do so with my head held high, knowing I gave my heart and soul to working with the finest journalists in the world.’

‘With much love and gratitude,’ Gollust signed her goodbye message to her colleagues.

Earlier this week, the chief executive of WarnerMedia, Jason Kilar, said that Gollust was resigning after committing ‘violations of company policies, including CNN’s news standards and practices,’ by her, Zucker and Chris Cuomo.

Gollust’s resignation is the latest blow to CNN which was already licking its wounds following the Zucker’s sudden push from the network two weeks earlier.

Zucker told staff that he was leaving after failing to disclose a romantic relationship with Gollust.

The couple’s relationship has been revealed to have been an open secret for nearly half of the 20 years the two worked together despite their claims that the relationship turned romantic during COVID (Pictured: Zucker, bottom left, was seen maskless at a Billy Joel concert with Gollust, bottom right, and Don Lemon, top right, in November)

The affair was uncovered by the Cravath law firm who declared the affair to have been kept from human resources and other executives at WarnerMedia, CNN’s parent company.

Former employees of CNN, however, have described the relationship between the pair as an ‘open secret’.

Before their hurried exits, Gollust and Zucker had worked together for 20 years. The pair claims their relationship turned romantic during the pandemic but others say it far predates COVID, and was common knowledge for as many as 10 years.

The pair were spotted at a Billy Joel concert last November, where they were called out for defying mask regulations. Don Lemon could also be seen during the concert standing in the row behind.

Sources have said the romantic relationship was so widely known, even the doormen at the Manhattan apartment building where they both lived with their separate families tried to keep Gollust and Zucker’s ex-wife, Caryn, from interacting.

‘Zucker would disappear for hours on end, but Caryn initially had no idea that the woman she was being polite to in the elevator was sleeping with her [then] husband,’ an unnamed source told the New York Post.

Zucker was married to Caryn Nathanson in 1996, after they met while working together at NBC. Gollust was married to William Hult, with whom she shares two daughters. Both couples are now divorced, and sources say their relationship was one of the main reasons for the separations

They added: ‘Everyone in the building knew about it -even the doormen tried to ensure Caryn wasn’t in the elevator at the same time as Allison.’

After the news broke last week, CNN host Alisyn Camerota defended Zucker and Gollust, saying there was nothing wrong with their relationship because they are both ‘executives’.

Zucker and Gollust lived in the same apartment building on the Upper East Side with their respective families until Jeff sold his in 2020, after he and his ex-wife Caryn Nathanson split.

The building is located at on the corner of Madison Avenue in Manhattan, New York. He resided in apartment 3W, while Allison lived in the unit right above him – number 4W – which she still owns.

Gollust was spotted last Friday evening at her Upper East Side apartment. She confirmed her and Jeff Zucker’s affair in a statement released to The New York Times earlier this month when the news of their relationship and Zucker’s exit broke

In her memoir, Going There, Katie Couric later claimed that their ‘cozy arrangement’ was ‘super strange’ and made her ‘really uncomfortable.’ She said in her book: ‘[Allison] and her husband and kids had moved into the apartment right above Jeff and [his wife] Caryn’s – everyone who heard about their cozy arrangement thought it was super strange.

‘By that point, Caryn had become a close friend and it made me really uncomfortable.’

According to public sales records, Jeff’s home hasn’t been put up for sale since he purchased it in 1999 – however it’s not known whether he or his wife took ownership of it in the divorce. Records also show that Allison still owners her Hampton home.

‘The contention that Zucker’s romantic relationship with Gollust “evolved” during the COVID pandemic is absurd,’ an unnamed source told the the New York Post. ‘They carried out the affair for years while the two occupied separate apartments at 32 E. 64th Street.

‘Zucker would get on the elevator and visit Gollust when the coast was clear. They didn’t even have to leave their building it was a perfect cover.’

Their relationship reportedly stretches back to when they both worked at NBC in the late 1990s. Zucker worked at the network from 1986 to 2010, becoming executive producer of the Today show, then head of NBC Entertainment before becoming president and CEO of NBC Universal.

He met Caryn while they were both working at NBC, when he was the executive producer of the Today Show and she was working at Saturday Night Live. The two were married in 1996, and have four kids.

Gollust, meanwhile, started at NBC in 1996 when she was working as a publicist for Today.

She was married to William Hult, and they had two daughters. According to RadarOnline, they broke up 12 months after Jeff and Caryn finalized their divorce.